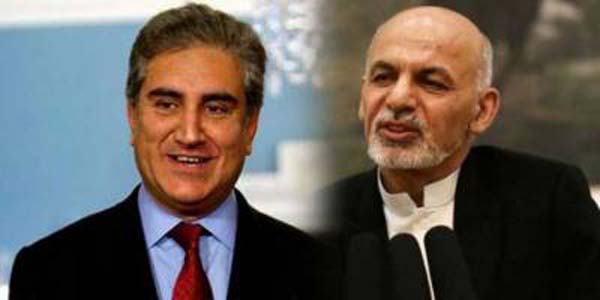 Minister for Foreign Affairs Shah Mahmood Qureshi Monday called on Afghan President Ashraf Ghani in Kabul, where he arrived on the first leg of his four-nation tour.

The foreign minister left this morning for a three-day visit to Afghanistan, Iran, China, and Russia to discuss Pakistan’s bilateral relations with the senior leadership of these countries and to strengthen cooperation in multiple areas.

During the talks, both the sides discussed the issues of mutual interest, progress on Afghan peace and reconciliation process and economic and trade issues between the two countries, the Foreign Office said in a statement.

Besides detailed exchange of views on important areas of bilateral cooperation, the foreign minister would also exchange views on the fast-changing regional and international environment with the leadership of the four countries.

Recent developments concerning peace and reconciliation in Afghanistan would also be discussed during these meetings.

Implementing the vision of Prime Minister Imran Khan, Pakistan is eager to strengthen ties with neighbors and regional partners.

Such cooperation is the key to unleashing Pakistan’s considerable potential and expanding mutually beneficial economic cooperation and development.

The visit is part of promoting various initiatives and ideas for regional cooperation especially in promoting economic and people-to-people linkages.

US ready for talks with Taliban – Asif Haroon Raja