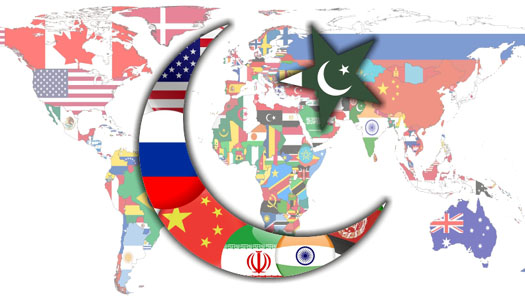 India has not reconciled to the existence of Pakistan and strives to reduce it to the status of a Satellite State.

India is a strategic partner of the US, Israel, Afghanistan and is the darling of the west. The trio is pursuing common objective of destroying Pakistan.

Kashmir is the jugular vein of Pakistan. Comprehensive and pragmatic Kashmir policy should be devised to keep the cause of Kashmir alive

India is working hard to isolate Pakistan by tarnishing its image and spoiling its relations with Afghanistan, Iran, Gulf States and the US.

Kashmir is an internationally recognized dispute but India stubbornly maintains that it is its integral part well knowing that the Kashmiris hate Indians and want freedom at all cost.

To keep Pakistan on the defensive and force it to forget Kashmir, India is playing terrorism card, Baluchistan and Sindh cards, and water terrorism to bend Pakistan on its knees.

India’s Cold Start doctrine is aimed at offsetting Pakistan’s strategic nuclear doctrine and executing it at a time when the bulk of Pak forces had got pinned down in designated restive areas.

The upturn of Pakistan’s sunk economy and its image, control over energy crisis and terrorism coupled with development works and fast progressing CPEC have increased the anxieties of India. To give vent to its frustrations, it is carrying out unprovoked firing across the LoC and working boundary in Kashmir relentlessly.

For all practical purposes, Pakistan has fallen from the grace of USA and time is not far when it will be once again be ditched and put under harsh sanctions.

Afghanistan under Hamid Karzai remained aligned with India and hostile to Pakistan. Afghan Unity government under Ghani-Abdullah is far worse.

Pak-Iran relations are frosty and practically, Iran is more close to India and Afghanistan.

Pakistan foreign policy makers are faced with perpetually hostile India, near hostile Afghanistan, and the changed attitude of the US. Washington has callously whipped Pakistan under its ‘do more’ policy and is now hurling warnings. It’s heavy tilt towards India is a matter of anxiety for Pakistan.

Pakistan should work hard to bring Iran in the loop of China-Russia peace-talks initiative, possibly draw in Turkey and conjointly work to restore peace in war torn Afghanistan

Warmth in the relationship with the GCC States has diluted because of Pakistan not agreeing to send troops to Saudi Arabia to ward off the threat from Yemen. Saudi-Qatar tiff is another challenge faced by Pakistan since it cannot afford to take sides.

Pakistan has been deliberately kept politically unstable by making it play the game of ladder and snake so that it remains economically dependent. It was pulled down whenever it grew economically strong. That is why it has been lurching from one crisis to another in its 70 years checkered history.

Pakistan can ill-afford political disharmony and disunity at this critical juncture when black clouds are hovering over its horizon.

Pakistan is faced with multiple threats of Indo-US-Afghan covert war, India’s Cold Start Doctrine, the US Af-Pak doctrine, and Hybrid war and all these threats have now become menacing.

The threat to its security has heightened after the signing of three Indo-US defense agreements in 2016 and the US openly expressing its enmity against Pakistan and love for India.

Foreign policy instead of being defensive, apologetic and reactive, should be infused with dynamism and pro-activeness

India is getting unnerved on account of high-intensity freedom struggle in occupied Kashmir, which is slipping out of its hands and is endangering the unity of India. India has no other choice except to keep persecuting the Kashmiris ruthlessly, keep the LoC on fire and to diplomatically place Pakistan on the back foot.

Muslim Pakistan, laced with nuclear/missile power and now getting economically strong due to CPEC is unacceptable to USA, India, and Israel. The trio may go to any extent to disrupt CPEC.

Pakistan is faced with the threat of two-front war from east and west, inauspicious southwestern backyard, vulnerable seacoast, not so friendly Gulf States, together with the internal war on terror and political instability.

Nuclear factor has compelled India to resort to indirect strategy to weaken Pakistan from within through unrelenting covert war, discredit and isolate it through propaganda and diplomacy, extract its nuclear teeth clandestinely, and then apply the military instrument through Cold Start doctrine.

Pakistan is a target and not an ally of USA. Earlier Pakistan gets out of the enchantment of USA, better it will be

Having tried out all possible means short of war, the only other option left with enemies of Pakistan is to create political chaos and logjam, paralyze the government machinery and then trigger civil war as in Afghanistan, Iraq, Libya, and Syria. Many are suspecting a game plan behind the current political imbroglio.

The success of $21 trillion One-Road-One-belt projects of China hinges on successful completion of CPEC. In view of China’s ambition to become leading economic power and its heavy economic stakes in CPEC, it is bound to come to the aid of Pakistan whenever its security is threatened.

Pakistan is a target and not an ally of USA. Earlier Pakistan gets out of the enchantment of USA, better it will be.

Any expectation of goodwill and empathy from India, Afghanistan under Ghani and USA, which in pursuit of their common objectives have been inflicting tens of thousands of cuts on the body of Pakistan and its people, will be foolhardy.

Foreign policy instead of being defensive, apologetic and reactive, should be infused with dynamism and pro-activeness.

The change in foreign policy should not be abrupt, but gradual and orderly without violent fluctuations. The change should be akin to autumn changing into winter, or winter into spring.

Pakistan is faced with multiple threats of Indo-US-Afghan covert war, India’s Cold Start Doctrine, the US Af-Pak doctrine, and Hybrid war and all these threats have now become menacing

While maintaining a working relationship with the USA, Pakistan should draw closer to China, Russia, Central Asia, SCO, and ASEAN.

Pakistan should work hard to bring Iran in the loop of China-Russia peace-talks initiative, possibly draw in Turkey and conjointly work to restore peace in war torn Afghanistan.

Pakistan must strive to establish a friendly regime in Kabul.

Surging Afghan Taliban and not the corrupt and inept unity government in Kabul toeing Indo-US agenda should be kept in the loop.

Pakistan should continue to play a mediatory role in the Iran-Saudi ideological rivalry and in Saudi-Qatar tiff to narrow down their differences and also allay the misperceptions of Gulf States on account of Yemen crisis. It will be unwise to call back Gen Raheel and detach Pakistan from 41-member Muslim Alliance.

CPEC should be made use of as a strong magnet by our foreign policy makers to attract as many nations from Central Asia, South Asia, Middle East, Africa and Europe to ward off Indian inspired threat of isolation.

Gwadar-Chahbahar economic rivalry should be converted into an opportunity to complement each other’s strength.

Kashmir is the jugular vein of Pakistan. Comprehensive and pragmatic Kashmir policy should be devised to keep the cause of Kashmir alive.

Conclusion: While many developing countries have raced ahead, Pakistan is still struggling and has neither become an Asian tiger or a secure country. Political parties are behaving irresponsibly and are advised to shun politics of agitation and division and promote the concept of “Unity in Diversity”. Strong and united home front is the best defense against internal and external challenges.

China voices concern (backs Pakistan) over the situation in Kashmir