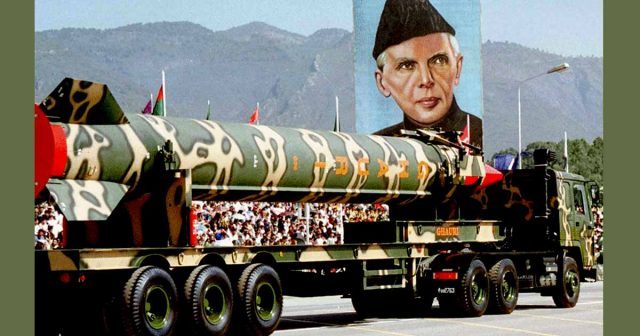 At 1.39 A.M EST on 27th March 2019, India successfully launched its first anti-satellite missile from the Dr. APJ Abdul Kalam Island complex in Odisha and joined the exclusive club of countries which possess the technology. While the timing of the test during India’s general election is no coincidence, the demo surely permitted Indian Prime Minister Narendra Modi to boast about India’s warfare capabilities in the near aboard.

However, in reality, India’s new space weapon is no way a threat to Pakistan’s balance of power in the region, especially, with regards to Pakistan nuclear and missile power. In fact, India’s anti-satellite missile test has violated international treaties and caused space terrorism. So in so that NASA is gravely concerned about the safety of the international space station and its astronauts.

Pakistan, on the other hand, remains a strong proponent of non-militarization of outer space, however, such maneuvers by India would be strategically responded. Surprisingly, the current Pakistan’s missile and nuclear technology serves perfect deterrence to this new development of India.

Even far advanced nations such as China and Russia lack the capability to strike strategically-located military satellites that orbit at an altitude of 20,000 km.

According to Jaganath Sankaran, a research associate at the Center for International and Security Studies at Maryland, anti-satellite missile equipment (ASAT) designed to incapacitate satellites for strategic military purposes have limits and pose no major threat to their respective adversaries. Technically speaking, the argument that the capability can dismantle enemies’ satellites to weaken adversary’s reconnaissance, surveillance and GPS systems is based on mere assumptions.

Even far advanced nations such as China and Russia lack the capability to strike strategically-located military satellites that orbit at an altitude of 20,000 km. The mission Shakti, after all, was not that powerful as the name sounds because India’s recent ASAT destroyed only a low-orbit Microsat-R satellite orbiting at 283 km. Surely for a developing and poverty-ridden country like India, it is a big achievement but the entire buzz in the media does not change the balance of power in the region.

India claims that it purposely tested the missile at low altitude so that the debris does not cause much damage to the international space station. But even if India was able carry out a similar ASAT test like the one China did in 2007, the ability to reach strategic satellites in deep space still would need highly advance technology which is technically not feasible and irrelevant in warfare.

Read more: Why India’s ASAT Test Heralds the Rebirth of the Cold War…

India’s assumption to dismantle Pakistan’s satellite communication system and paralyze its nuclear missile guidance systems is not factual. This is because Pakistan military uses China’s Beidou satellite navigation system, which orbits the Earth at 22,000 km and above. Not even advanced nations have the capability to destroy the satellite at such altitude let alone India. Beidou is rival to the American GPS.

The American military is heavily dependent on its GPS for the deliverance of it nuclear guidance missiles. But due to the recent changes in the geopolitical partnerships in South Asia, especially the enhanced cooperation between USA and India, Pakistan military has switched from relying on GPS to Beidou satellite system. This special allowance only given to Pakistan military to share the Beidou system has heralded a new age of strategic space partnership between China and Pakistan.

The Shaheen-3 is a power to reckon with. With built-in MIRV technology, the missile has full capability to deter Indian second-strike capability from the Andaman and Nicobar islands and also penetrate the blanket coverage of S-400.

This ensures that Pakistan’s operationality in times of war would remain unhindered. In case in future if India increases the strike range of ASAT program, which is not possible due the fundamental constraints of physics and range limits, it would still be nearly impossible to immobilize Pakistan’s communication network as it would have to destroy more than 30 Beidou satellites that provide Pakistan military 24-7 coverage to support its conventional and non-conventional weapons.

In fact, India targeting Chinese Beidou satellites would be considered a violation of China’s sovereignty and be classified an act of war; therefore India would think twice before this suicidal step. It must be reminded that R-36, the most advanced Russian intercontinental ballistic missile, which holds maximum operational range record of 16,000km, is unable to reach either Medium Earth Orbit (20,000 km) or Geosynchronous Earth Orbit (36,000km). Therefore, disrupting the navigational support for Pakistan’s nuclear and tactical nuclear delivery is not possible.

Pakistan has a variety of advanced missiles to deliver its nuclear warheads. Firstly, Babur-1 is an all-weather nuclear capable land, sea and air launch capable missile. With a range of 700km and other distinct features such as Terrain Contour Matching (TERCOM) and all-time Digital Scene Matching and Area Co-relation (DSMAC) technologies, which facilitate it to engage in different types of targets with pinpoint accuracy, the lethality of the weapon is recognized internationally. The inboard guidance system enables Babur to use satellite GPS (Beidou) and INS/TERCOM/DSMAC system independent of satellite to carry out 500km of nuclear strikes.

Read more: India, Pakistan threatened to unleash missiles at each other: sources

Secondly, Raad 2 is akin to Babur in technology but is a far more advanced air-launched cruise missile (ALCM). Due to limited information on the missile’s full capabilities, the opacity surrounding its stealth technology is to leave the enemy defense systems unprepared. With an official disclosed range of 550km, the missile is loaded with self-navigating technology and can fly on a non-ballistic very low altitude trajectory in order to avoid radar detection.

Raad gives Pakistan a standoff capability. It means its can deliver both conventional and nuclear warheads. The missile use of GPS and infrared imaging seeker to navigate with digital scene-matching techniques makes Raad the perfect nuclear deterrent.

The third Pakistani masterpiece is a warhead carrier developed indigenously to counter the strategic imbalance created by India’s procurement of S-400 is Ababeel. The surface-to-surface nuclear-capable missile has operational range of 2,200km and boasts MIRV system, which is capable of launching multiple nuclear warheads with inbuilt decoys – flying objects to exhaust interceptor missiles- at mid-course and the terminal stage. The missile is so lethal that even Robert Ashley, the director of the American Defence Intelligence Agency, recognized the destructive and BMD capability of the missile.

The post-Pulwama fiasco instead humiliated India in the international arena; therefore to show military and technological might it needed to display some defence innovation.

Furthermore, Pakistan’s stock of nuclear-capable missiles includes Shaheens, Ghauris, Abdalis and Ghaznavis, all capable to sheer through enemy’s defence lines. But the jewel of all is Shaheen-3, which has operational range of 2,750km with built-in inertial navigation system independent of GPS satellite.

However, for further instrumentality, its navigation system can be integrated with Beidou-2. The Shaheen-3 is a power to reckon with. With built-in MIRV technology, the missile has full capability to deter Indian second-strike capability from the Andaman and Nicobar islands and also penetrate the blanket coverage of S-400.

In fact, Pakistan’s own second-strike capability achieved through nuclear-capable submarine-launched cruise missile (SLCM), Babur-3, has taken hostile forces by surprise. As a result, the Indian army has triggered an arms race by spending billions of dollars on anti-missile defence systems.

An ISPR’s press release notes that Babur provides Pakistan with a “credible second strike capability, augmenting the existing deterrence regime.” Only few countries in the world have achieved this capability and Pakistan is one of them. Babur-3 shares its navigational operations with its air and land versions and is completely immune to India’s anti-satellite missile capability.

Many experts including Vipin Narang, an associate professor of political science at MIT, believe that India’s anti-satellite test probably did not have much to do with satellites as it was a mere demonstration. He argued that it would not alter the balance of power status in the region.

In reality, it had one objective: to bolster the support for Modi’s election campaign. The test was a mere political symbol to serve anti-Pakistan sentiment among the crowd. And the above technical analysis has identified that India has achieved no strategic advantage over Pakistan and the balance of power paradigm remains constant. Pakistan’s arsenal still acts as deterrence to India’s capabilities be it on land, sea or air.

Pakistan is a sovereign and responsible nuclear nation and understands the socio-economic issues of the subcontinent but also knows the importance of survival needed in the international comity of nations.

Instead, India ASAT has violated international laws and treaties. India is signatory of Outer Space Treaty 1967 and according to Article 4 of the treaty, it has violated the basic principles of the United Nations Charter under which the treaty was formulated.

It is most likely that India used a modified version of the Prithvi missile, which India has been developing for more than a decade. It has rather threatened space assets of other states because the debris of the wrecked satellite in the Earth’s atmosphere challenges the safety of other peaceful space programs.

Surely, mission Shakti was not launched for the collective benefit of the society as envisioned in the space treaties. Sadly, India has lost at both fronts. Neither it could prove its commitment to international space laws nor it could achieve strategic balance of power advantage over Pakistan.

Pakistan is a sovereign and responsible nuclear nation and understands the socio-economic issues of the subcontinent but also knows the importance of survival needed in the international comity of nations. The recent India demonstration of power has not disturbed its nuclear parity with Pakistan.

Therefore, India’s space investment and focus would only weaken its already fragile and poverty-ridden economy. However, Pakistan respects international space laws and realizes the challenges to its economy but is also ready to safeguard its sovereignty against any misadventures by India.

Ammar Akbar Chaudhry is alumni of St Antony’s College, University of Oxford. He is International Youth Ambassador at Global Youth Parliament, is a Defence Analyst, and writes for ‘Hilal’ magazine, Pakistan Armed Forces. Email: ammar.akbar@oxfordalumni.org. This piece was first published in ‘Hilal’ Magazine. It has been reprinted with permission. The views expressed in this article are author’s own and do not necessarily reflect the editorial policy of Global Village Space.