Trump Middle East plan: Palestinians not on board

According to Trump's Middle East plan, Israel can annex West Bank, which is part of Palestinian territory. Palestinians, and the international community, have come forward and protested against this violation of international law. 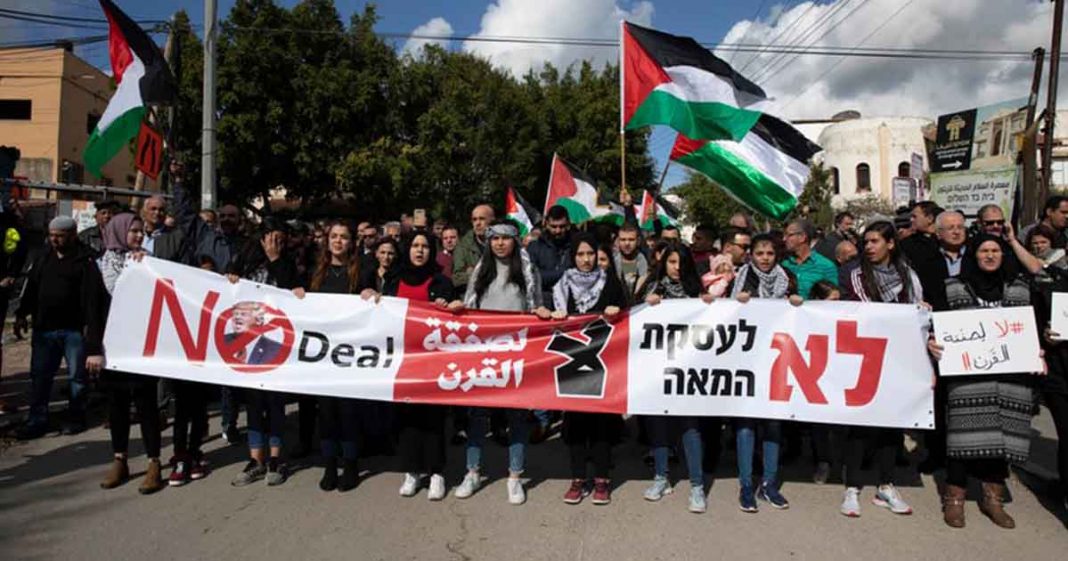 Thousands of Palestinians on Monday demonstrated against US President Donald Trump’s plan for the Middle East that includes Israel’s annexation of parts of the occupied West Bank.

The protest in Jericho, in the south of the Jordan Valley, came in response to a call by Fatah, the party of Palestinian president Mahmud Abbas, AFP reporters said.

It was the largest rally of its kind since Trump in January unveiled his controversial plan for Israeli-Palestinian peace, which gives Israel a green light to annex West Bank settlements and the Jordan Valley.

Israeli Prime Minister Benjamin Netanyahu is expected to announce as soon as July 1 his strategy to implement Trump’s plan.

The move forms part of a broader peace plan published by the United States, although Washington has not publicly backed Netanyahu’s timetable.

Fifty percent of Israelis support annexation, half of them only with US support, according to a new poll published by the Israel Democracy Institute.

Nearly 31 percent oppose annexation, while the remainder were undecided.

Despite the majority voicing support for Netanyahu’s proposal, implementing his plan would very likely lead to an uprising, according to 58 percent of Israelis surveyed.

The most recent Palestinian uprising, known as the Second Intifada, erupted in the early 2000s and included waves of freedom fighters clashing with the Israeli Defence Forces.

Annexation and the overall US peace deal have been firmly rejected by Palestinian officials, who cut diplomatic ties with Washington in 2017 after President Donald Trump recognised the contested city of Jerusalem as Israel’s capital.

The Palestinians have rejected the plan and have been trying to rally international support against it.

“If Israel annexes there won’t be any land left for a Palestinian state,” said protester Mohammed Ishloon, 47, who came to the demonstration from the Aqabat Jaber refugee camp outside Jericho.

“We will not let Israel steal our lands,” added demonstrator Kamal Said.

Palestine is not for sale

Israel’s annexation plan envisions the creation of a Palestinian state, but on reduced territory and without meeting the key Palestinian demand of having its capital in east Jerusalem.

Protesters in Jericho held up signs that said “Palestine is not for sale” and “No Palestinian state without the Jordan Valley”.

1 July, Madrid: Palestine is not for sale! Demonstration for the Palestinian People’s Rights https://t.co/TJvqTxgwEg

“The UN believes annexation is against international law,” Mladenov said.

“If it happens it might kill the very idea that peace and statehood for the Palestinian people can be achieved through negotiations,” he added.

Mladenov urged the Palestinians to oppose the Israeli plan by peaceful means.

“People of Palestine do not despair… do not stray away from the path of non-violence,” Mladenov said.

“You’re not renting a home, this is your home. Do not lose sight of the goal of  a free Palestinian state… next to Israel,” he added.

The West Bank, which Israel occupied in 1967, is home to 450,000 Israeli settlers and 2.7 million Palestinians. Israel controls all access to the territory where Abbas’s government is based.

Jordan, which has a peace treaty with Israel, has warned if could review its ties with the Jewish state if it goes with annexation and other Arab countries have voiced opposition to the plan.

The UN’s special Middle East envoy, Nickolay Mladenov, in April warned Israel not to annex parts of the West Bank, saying such a move would be a “devastating blow” to the internationally-backed two-state solution.

In a video briefing with the Security Council, which holds a meeting each month on the Israeli-Palestinian conflict, Mladenov hailed what he called “inspiring examples of cooperation across conflict lines” in the coronavirus battle.

“The dangerous prospect of annexation by Israel of parts of the occupied West Bank is a growing threat,” Mladenov said, warning that such a move would violate international law.

Mladenov called on Israeli and Palestinian leaders to “seize this moment to take steps towards peace.”

He also urged them to “reject unilateral moves that will only deepen the wedge between the two peoples and undermine the chances for peace.”

Previous articleDid previous governments neglect Balochistan?
Next articleLimited Hajj to be held this year due to coronavirus: Saudi state media

Recognizing Israel’s sovereignty over Golan Heights: Is US above international law?

Biden speaks to Modi: Is Hindu nationalism a threat to Indian democracy?