While the medium of films is a significant tool in molding opinion and propagating ideas, the anti-Muslim sentiments are taking a stronghold in Bollywood. Bollywood makes another attempt to malign a celebrated Muslim warrior Ahmed Shah Abdali in the upcoming movie Panipat. 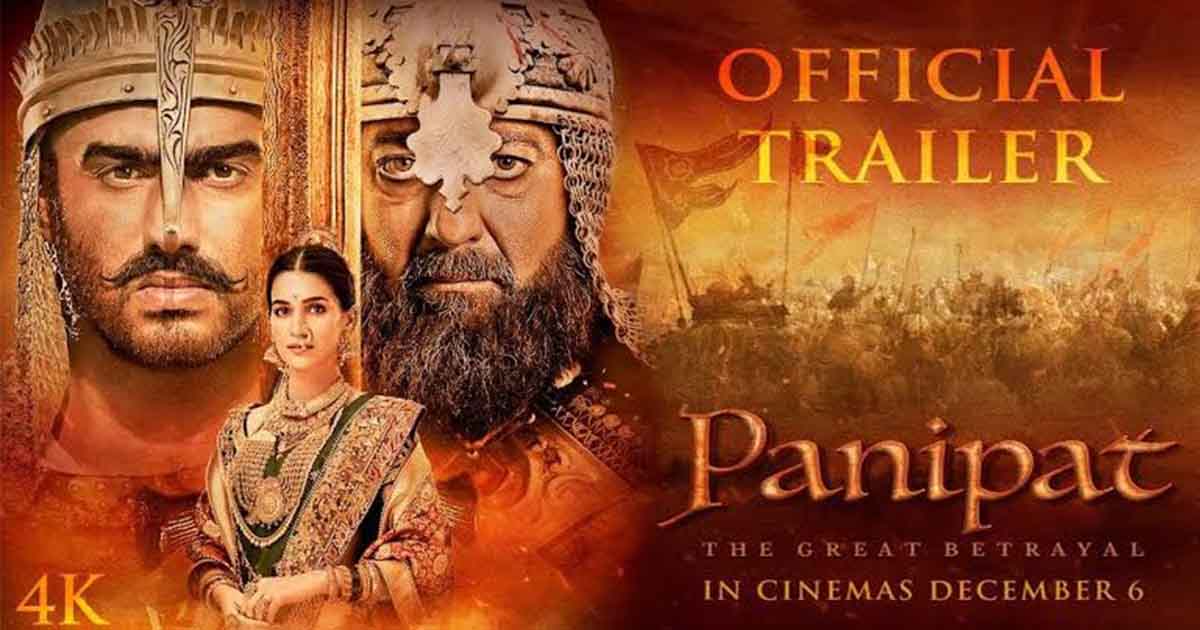 Bollywood is set to release another period film ‘Panipat‘ featuring the fierce third battle of Panipat between the Afghan ruler Ahmed Shah Abdali his two Muslim Indian allies against the Marathas.

The trailer of the movie ‘Panipat’ is a mishmash of ‘Padmaavat’, and ‘Baji Rao Mastani’. Both the actors, Arjun Kapoor and Sanjay Dutt will be channeling Ranvir Singh, who has played the protagonist Peshwa Baji Rao in ‘Baji Rao Mastani’ and an antagonist Muslim ruler Alauddin Khilji in Padmaavat.

The trailer of the movie begins with Sanon’s voice in the background hailing the bravery and courage of Maratha warriors with glimpses of Arjun Kapoor on a killing spree on the battlefield. The trailer then goes on to shed light on Sadashiv and Parvati’s love story.

Almost halfway through the trailer, we are introduced to Sanjay Dutt’s character. He has his eyes set on defeating Sadashiv Rao Bhau. By the end of the trailer, Sadashiv and Ahmad Shah come face to face, fighting for their pride.

Another glaring similarity between these movies echoes anti-Muslim sentiments featuring Muslim rulers as tyrants, barbaric, and blood-thirsty. A character in the trailer of ‘Panipat’ can be seen persuading Arjun Kapoor to inflict a damaging defeat on the Muslims in the battle so that they never return to India.

The same producer Ashutosh Gwarekar who has under his belt movies like ‘Lagaan’, ‘Swades’ and Jodha Akbar mainly highlighted anti-British sentiments but showed Hindu-Muslim unity and glorified the legacy of Hindu and Mughal emperors. The anti-Muslim sentiments are growing in Bollywood and the patterns can be traced in movies like acclaimed director Sanjay Leela Bhansali’s, ‘Baji Rao Mastani’, Padmaavat, Akshay Kumar’s ‘Kesari’ and Kangana Ranaut’s ‘Rani of Jhansi’.

Read more: Why playing Khilji in ‘Padmaavat’ was the biggest risk of Ranveer’s career

The movies and their outstanding success on box-office indicate a shift in the outlook of the Bollywood, which has driven it towards an aggressive and scornful outlook towards historical triumphs of Muslim rulers. By repeatedly reinforcing the narrative Bollywood is attempting to alter the history, underestimate the triumphs and success of Muslim rulers and show them as tyrants and Hindu rulers as protagonists and innocent.

Scale, grandeur & impact .. @AshGowariker displays his craft yet again ..@arjunk26 becomes the part @kritisanon his foil ..
What can one say about @duttsanjay !
Congos team Panipat .. #PanipatTrailer
C u at the theatres👍 https://t.co/dFQszuraSH

Wow. Well done @AshGowariker can’t wait to see it on the big screen !

Bollywood is killing two birds with a stone, it is not only excessively glorifying Hindu rulers but is maligning Muslim rulers and warriors as war-mongers, extremists, and merciless in their movies simultaneously. Mount in anti-Muslim sentiments can be largely attributed to the right-wing Hindu nationalist party, BJP, at the center. A gradual rise in hate crimes against Muslims and minorities have been witnessed under their rule.

A lot of dissension was directed on ‘Padmaavat’ for making an intimidating, wild and, the untamed persona of Alauddin Khilji in Padmaavat. Now, another Muslim ruler, Ahmed Shah Abdali or Sanjay Dutt is given the same persona in ‘Panipat’.

Bollywood is in allegiance with PM Modi and his recent meeting with the Bollywood celebrities in which he urged filmmakers to produce movies highlighting the Indian and particularly the legacy of Hindu rulers testified Bollywood’s penchant for anti-Muslim content.

The history of zombies: Where did the phenomenon begin?