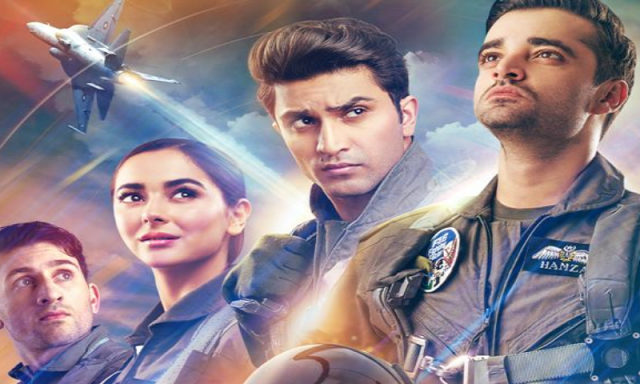 The one-minute long action-packed teaser is sure to reignite the patriotic feel since its an attempt to honor the brave men and women of Pakistan Air Force.

Last week the team of ‘Parwaz Hai Junoon’ revealed the poster of the movie.

The trailer features Hamza Ali Abbasi and Shaz Khan flying fighter jets. The storyline of the movie is kept under covers. The supporting cast of the film includes actual cadets, fighter pilots, and PAF personnel.

The clip begins with fighter pilots preparing to go on a mission. Control room directing the mission and fighter jets flying fiercely in the sky tells the movie is packed with lots of adventure.

The movie is penned down by Farhat Ishtiaq and directed by Haseeb Hassan under Momina Duraid Productions. The movie is set to release on Eid-ul-Fitr alongside Mahira Khan’s ‘7 Din Muhabbat In’.

At the launch of the film last year, Hamza Ali Abbasi revealed that he would shot his scenes in CASA Aircraft. He expressed his excitement for donning a role of a fighter pilot in the movie. He said,” This is an honor for us! I am looking forward to presenting the face of PAF to the world.”

Talking about the project, Hania revealed, “It’s a very patriotic film and the cast is full of young people so it’s really fun. The film is also quite women-centric so I am very happy to be a part of it.”

The cast of the film informed they are undergoing basic physical training for their roles of military personnel.