As part of his ongoing efforts as the ambassador of Kashmir, Prime Minister Imran Khan had telephonic conversations with French President Emmanuel Macron and the King of Jordan Abdullah II Ibn Al Hussein, to apprise them of the ongoing situation and humanitarian crisis in the Indian-occupied Kashmir. 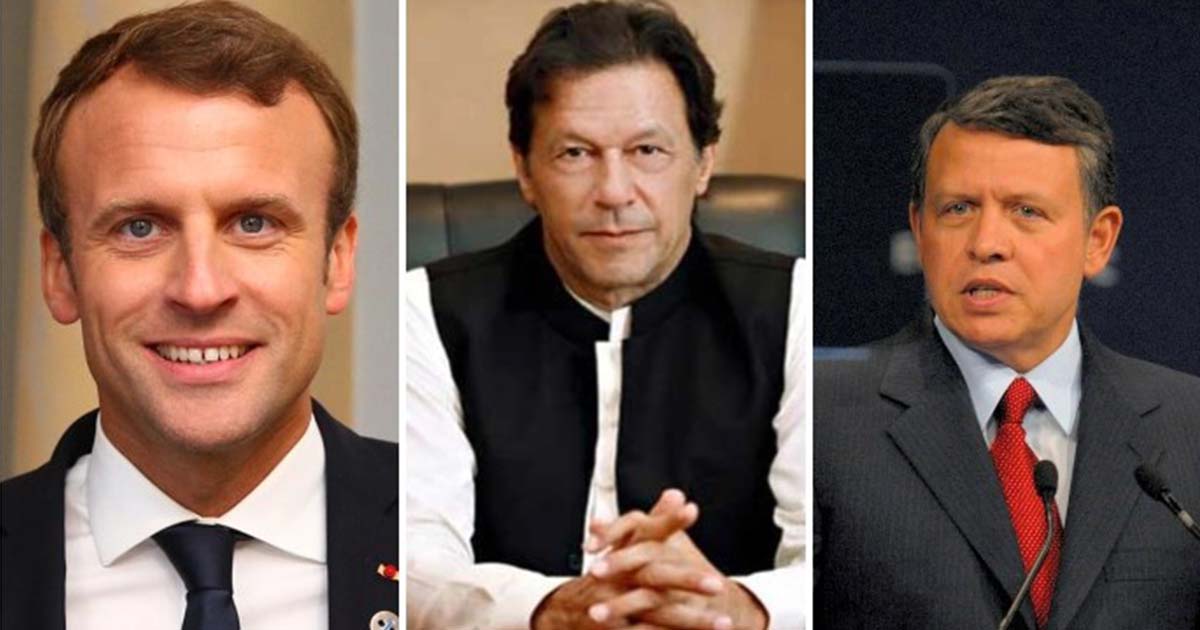 Prime Minister Imran Khan, as part of his diplomatic efforts to highlight the human rights violations in Indian occupied Jammu & Kashmir, had telephonic conversations with French President Emmanuel Macron and Jordanian King Abdullah II Ibn Al Hussein on Wednesday, to apprise them of the ongoing situation in the disputed Himalayan region.

The Prime Minister had addressed the nation on Monday, pledging to act as an Ambassador of the Kashmiri struggle for freedom, and raise the issue on every forum.

The Prime Minister’s Office revealed that during the conversation with the Premier, the two leaders noted that their countries are closely monitoring the situation in Indian-occupied Kashmir, and stressed the need to seek a peaceful resolution to the longstanding dispute.

In his conversation with President Emmanuel Macron, Prime Minister Imran Khan apprised him of the unlawful measures taken by the Modi administration, and the sinister agenda to alter the demographic structure of the occupied territory.

Prime Minister Imran Khan said that the international community must “take notice of the Indian excesses and raise their voice for the oppressed people of Indian Occupied Kashmir.”

“The Prime Minister underlined that the actions taken by India posed a grave risk for peace and security in the region. He highlighted the severe hardships faced by the people of the Indian occupied Jammu and Kashmir in the face of unprecedented lockdown of the entire population.”

The press release issued by the PM’s Office added, “The Prime Minister apprised on the worsening situation of basic human rights, safety and security of the people in the Indian occupied Jammu and Kashmir, which has been under curfew since 05 August 2019.”

President Macron noted that France was “closely observing the situation in the Indian Occupied Jammu and Kashmir.” President Macron underlined the importance of resolving all outstanding issues between India and Pakistan “through peaceful means.”

Prime Minister Imran Khan and French President Emmanuel Macron agree to continue to work together for regional peace and stability.

Prime Minister Imran Khan called His Majesty King Abdullah II Ibn Al Hussein, the King of the Hashemite Kingdom of Jordan, to apprise him of the deteriorating situation in the Indian Occupied Jammu & Kashmir.

Prime Minister Imran Khan apprised him of the unlawful measures undertaken by the Narendra Modi-led government, which have endangered regional peace and security, alongside threatening the lives of innocent Kashmiris.

The Prime Minister’s Office stated, “The Prime Minister said that India’s illegal and repressive policies in the IOK has not only led to a grave humanitarian crisis but also endangered peace and security in the region.”

It added, “Through its unilateral and fascist actions, he added, India was attempting to change the demography of the disputed territory, which was a blatant violation of the international norms and the UN Security Council resolutions.”

Prime Minister Imran Khan said that the international community must “take notice of the Indian excesses and raise their voice for the oppressed people of Indian Occupied Kashmir.”

His Majesty King Abdullah II said that Jordan has been closely following the developments in Indian Occupied Jammu & Kashmir. The PM’s Office stated, “He called for de-escalation of the situation and stressed for peaceful resolution of the Kashmir dispute through dialogue. He added that Jordan would consult other countries on the situation in Kashmir.”

The occupied valley of Kashmir has entered its fourth week of a strict security lockdown and communications blackout and despite the restrictions on movement, and ongoing shortage of money, food supplies and life-saving medicines, international media is reporting large protests erupting across the valley.

The region has been placed under a strict curfew by the Modi administration to quell protests over the abolishment of Article 370 of the Indian Constitution, which provided special constitutional privileges to Indian-occupied Jammu & Kashmir.

Previous articleUS urges S.Korea, Japan to unite as rift escalates
Next articleHow to have better sleep: Leave your work in the office!

29 July 2021
Previous articleUS urges S.Korea, Japan to unite as rift escalates
Next articleHow to have better sleep: Leave your work in the office!

India lashes out in frustration as it loses international face

JuD approaches LHC against ban by the federal government