PIA Performing Better than Ever Before: Losses Dip by 18 Billion

In the National Assembly of Pakistan, questions were raised against the performance of the national flag carrier, PIA, to which the federal minister for aviation responded with facts and figures. PIA, under PTI, has been functioning at its best and the deficit is as low as ever. Federal Minister hoped that the bad patch for PIA was over.

The bad patch for PIA seems to have ended as National Assembly was apprised of the decline in PIA losses up to 18 Billion in the last 3 years.

Attending to a call attention notice, Federal Minister for Aviation, Ghulam Sarwar Khan, brought under NA’s notice that regular tenders were offered regarding the provision of entertainment services during flights in 8 Boeing PIA jets; however work order has not been passed to any committee as of yet. Sarwar further highlighted that the matter is currently subjudice in the courts and an inquiry is in place on the said matter.

Member Assembly Agha Rafiullah notified NA about another of national flag carrier‘s plight telling that government is bent on running PIA owned kitchen on contracts when PIA is fully capable of handling it.

He further put forward statistics that highlighted the fact when recent government took charge, the deficit PIA was suffering from was 416 Billion while 4 of its aircrafts were grounded due to technical errors or flight incapability, but with the continued efforts by the authorities towards better operational settings, PIA’s deficit is decreasing gradually. Authorities are working to put PIA on the right path for a better future for the national carrier.

Read more: PIA: A Tale of Glory and Neglect

Mr. Rafiullah further told the Assembly that PIA officials took action against the fake degree holders and in a bid to revamp the structure, 600 employees with fake degrees have been sacked, of which an inquiry report will soon be presented before the house.

Federal Minister Ghulam Sarwar questioned the intelligence in probing the PTI government’s 16 months’ involvement in PIA’s decline and setting aside the wrongdoings of last 35 years by previous governments, however, he took the challenge head on and said he will prove PIA only flourished under PTI’s banner. 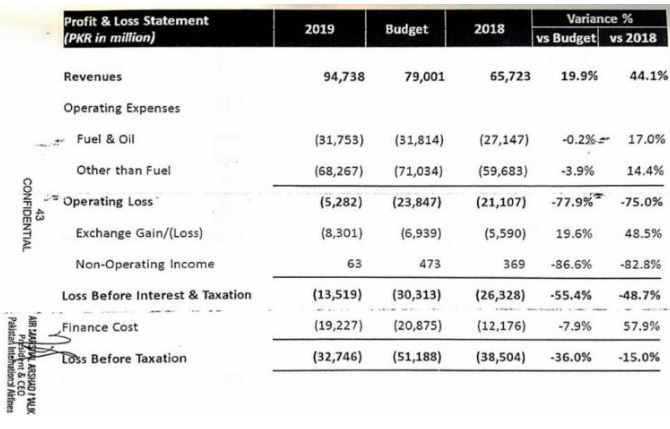 He added that in 2017, PIA was running on 32 Billion Rs deficit while under PTI, in 2018, that amount came down to 29 Billion and gradually will decrease further with time.

He asked the members to let the people of Pakistan know the real performance of Pakistan International Airlines.

The government is pursuing reforms to save the #PIA national flag carrier from the deficit and to make it a profitable organization: Prime Minister Imran Khan pic.twitter.com/bVdAIDYbIQ

Abdul Qadir Patel of PPP disagreed with the figures put forward by the Federal Minister and claimed that in the last six months PIA has incurred a loss of 60 Billion Rs and he alleged that federal minister is trying to mislead the house and rendered the PTI’s claims of betterment baseless and mere lies.

Mehreen Razzaq Bhutto raised a question about the qualifications of the current CEO of the state institution and asked for them to be made public. In response, Mr. Sarwar said that the appointment of the new CEO has also been challenged.

Federal Minister for Aviation held that airline services were a profitable institution under the leadership of Air Marshal Nur Khan and Air Marshal Asghar Khan.

PIA rising out of oblivion

PIA figures, acquired in 2019, told that the airline’s revenue rose by 44.1 percent from January to June.

PIA pocketed a revenue of Rs 94.73 billion as against Rs 65.72 billion of last year’s corresponding period, registering an increase of Rs 29 billion.

Read more: PIA is showing signs of improvement and looks towards future

The airline’s operating losses declined by a whopping 75 percent to Rs 5 billion from Rs 21 billion recorded during the same period of 2018. The national flag carrier’s net operating losses saw a drop of 48.7 percent.

PIA’s revenue rose because of an increase in profit-making routes of the airline.

News Desk - 18 October 2021
The efforts of Zameen.com in this regard were appreciated by the large crowd of attendees at the event. The two-day Property Sales Event featured exclusive deals for 20+ premium real estate projects – for which Zameen.com is the exclusive sales and marketing partner.

Emperors of Subcontinent: Selfish invaders or founders of the Great Indian civilization?

Tarin dismisses reports of failure of talks between IMF and Pakistan

Why Dussehra festivities is significant to RSS?

How the future of US engagement in the Middle East hangs in the balance?

Tarin dismisses reports of failure of talks between IMF and Pakistan

Why Dussehra festivities is significant to RSS?

Tesla under scrutiny amid safety concerns over assisted driving features

Situation in Afghanistan is not easy: Putin

The rise and fall of PIA; Has Imran Khan taken the right step?