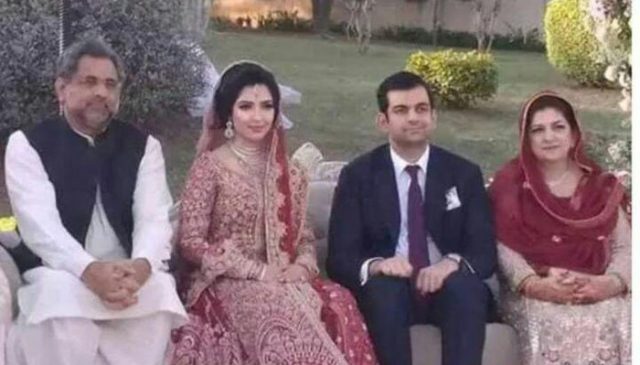 Prime Minister Shahid Khaqan Abbasi hosted a simple ‘valima reception’ for his son at PM House on Sunday, March 4, 2018. The ceremony was in sharp contrast to the usual extravagant wedding affairs politicians in Pakistan organize for their children. The reception was simple and reportedly a private affair.

As reported on media, the guest list for the reception was limited, neither any government official nor any staff member of PM house was invited to the wedding reception of his son.

The guests were served one dish in accordance the recently imposed restriction in the federal capital, Islamabad. The premier held the function in the lawn of the PM house due to security reasons.

It is unclear whether the money to organize the reception came from public funds or he bore the expenses from his pocket.

Read more: Why criticism on Khan’s marriage is unfair

The function was in contrast to the recently held wedding ceremonies of the sons of Pakistan People Party leader Khursheed Shah and Pakistan’s Tehreek-I-Insaf’s leader Shah Mehmood Qureshi.

Khursheed Shah organized a fanciful ‘mehndi’ ceremony of his son last week at Shahrah-e- Faisal in Karachi. He entered riding an expansive motorbike with his son sitting at back to premises of ‘mehndi’ ceremony.

He invited popular singer Rahat Fateh Ali Khan to grace the event that was attended by thousands of guests including senior government and party officials.

Similarly, Shah Mehmood Qureshi, a political figure from Southern Punjab demolished the sightscreen of Bahauddin Zakariya University’s playground in Multan for the wedding reception of his son.

Former ousted Prime Minister Nawaz Sharif during his premiership hosted a fanciful wedding ceremony of his granddaughter in 2015 in Lahore. He invited his counterpart from India Narendra Modi in the wedding that was widely criticized in the public.

Time line of violence in Islamabad…!