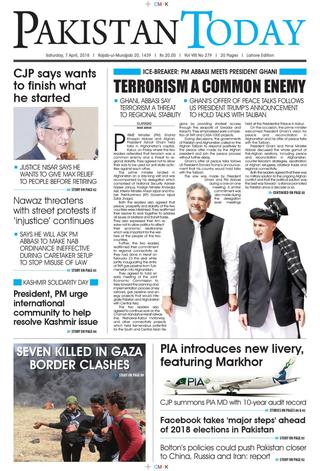 Prime Minister (PM) Shahid Khaqqan Abbasi has raised the voice of people residing in occupied lands and stressed the utmost need for ensuring that justice is delivered to people enduring state-sponsored oppression and terrorism.

According to Radio Pakistan, while, representing Pakistan in the 25th meeting of Commonwealth heads of government-which is continuing in London-PM Abbasi interacted and held important meetings with the world leaders.

During meetings with the world leaders on the sidelines of the Commonwealth summit in London, he said that “the shared goal of shaping peaceful societies will remain elusive without guaranteeing fundamental freedoms and resolving disputes”.

PM also cautioned against “indulgence in blame games and politicization for domestic and external goals” and said that “such steps are not conducive to address the scourge of terrorism”.

He also highlighted connectivity in the context of enhancing trade and investment, describing CPEC as a model for prosperity nationally and regionally.

PM was particularly pointing out at India, apparently over atrocities inflicted on Kashmir and its efforts to create obstructions and block the development of CPEC. Indian attempts of jeopardizing peace and stability of the region by waging proxy wars against Pakistan through Afghanistan was also highlighted by the PM.

It may be able to partially affect the development, in the short-run, using state inflicted terrorism, but over long-run, Indian ambitions will be dispelled, if China and Pakistan continue to work to ensure cooperation in the best interest of regional hegemony and prosperity.

Lately, India has escalated its efforts to silence Kashmir voices over illegal occupation. The wounds of the people have culminated into gangrene.

In March, 29 people were martyred and 198 critically injured after torture and 19 women were either molested or gang-raped in the last month alone.

Despite massive recent protests, where thousands of Kashmiris hit the streets chanting anti-India slogans and demanding an end to Indian rule over Kashmir, India continues to suppress the innocent indigenous population.

With elections due in 2019 in India, Modi Sarkar is reluctant to engage Pakistan at this juncture. Violence in the valley is on the rise, massive protests have taken place recently, and counterinsurgency operations are targeting the freedom fighters.

The new age-freedom fighters have challenged the hegemony of the Indian forces, and India is responding by making the modes of communication ineffective and launching operations to kill the insurgents.

Apparently, after the killing of freedom fighter Burhan Wani and the election of the Hindutva fundamentalist BJP to power, the renewed resistance to Indian occupation has a long way to go.

But, World remains silent over these cruelties in Kashmir and none of the countries is taking courage to condemn Indian atrocities. Even, if Kashmiris remain as voiceless, as they are, the current uprising is merely a start, it will only flare up with time.

Despite running the state terrorism campaigns in Kashmir, Balochistan and other parts of Pakistan, it shamelessly accuses Pakistan of terrorism in India.

Pakistan has often lost to India on setting the agenda at international stage due to lack of effective foreign policy and failure in diplomacy. Going forward Pakistan needs to engage with the world and improve on a bilateral front to highlight issues of people in occupied territories, particularly to make the case for Kashmiri people.

Will former PM Nawaz be granted exemption from appearance in IHC tomorrow?