Inaugurating the Torkham border, Prime Minister Imran Khan pointed out that this was a historic development that will not only increase Pak-Afghan trade volumes but will also aid in improving relations between the two countries.

Prime Minister Imran Khan, on Wednesday, formally inaugurated the opening ceremony of the Torkham border crossing, which will be open for 24 hours all year round. The Prime Minister was accompanied by Foreign Minister Shah Mehmood Qureshi, and Khyber Pakhtunkhwa Chief Minister Mahmood Khan, alongside other senior ministers and military officers. The opening of the Torkham border for trade 24/7 had been particularly emphasized as being important by Afghan President Ashraf Ghani during his visit to Pakistan in June 2019. The move will help to increase bilateral trade between the two countries which is currently around $2.5bn.

The Premier inaugurated the Integrated Transit Trade Management System and addressed a press briefing on the border terminal.

Speaking to the press at the opening ceremony, Prime Minister Imran said that the Torkham border crossing will be open for 24 hours every day, in order to facilitate trade across the region.

“This is a very historic day,” said Imran Khan, observing that the trade volumes with Afghanistan have increased by 50% during the trial period of the 24/7 border opening conducted by the authorities earlier this month.

The premier said that the entire region will undergo a transformation after peace is established across Afghanistan, and trade activities will be extended as far as Central Asia. He said, “The lives of the people living in the region will be transformed.”

The premier noted that Peshawar will emerge as a regional hub of commerce and business activities, creating scores of job opportunities for the local people. He noted that Afghan patients can use the border crossing to access medical facilities in hospitals across Pakistan.

The Prime minister was briefed by Major-General Asim Iqbal, DG National Logis­tics Cell (NLC), over the arrangements for the round-the-clock, trans-border trade terminal. The Torkham border terminal will help regulate the two-way movement of passengers and cargo and stop smuggling and entry of transit goods back into Pakistan as well as drug trafficking.

The NLC manages the overall security, as well as operations of the terminal including weighing and scanning of cargo and facilitation of other agencies, also engaged on the terminal including Customs, Nadra, Federal Investiga­tion Agency (FIA), and the Anti-Narcotics Force (ANF). Further upgrading work is also being done by NLC at the border terminal under the Integrated Transit Trade Management System (ITTMS) regime which will take it to international standards.

The NLC has played a major role in the national development since its inception – it was set up in 1978 after a massive strike at Karachi Port brought the country’s logistics operations to a stop; creating a scarcity of essential commodities across the country.

The increased documentation on the border is also a very positive step as traditionally Afghans have resisted the process; to this date they do not accept the international border set by the Durand line between Afghanistan and Pakistan. This has been a stumbling block for decades in any discussion between the two countries over the need for documentation at border points. 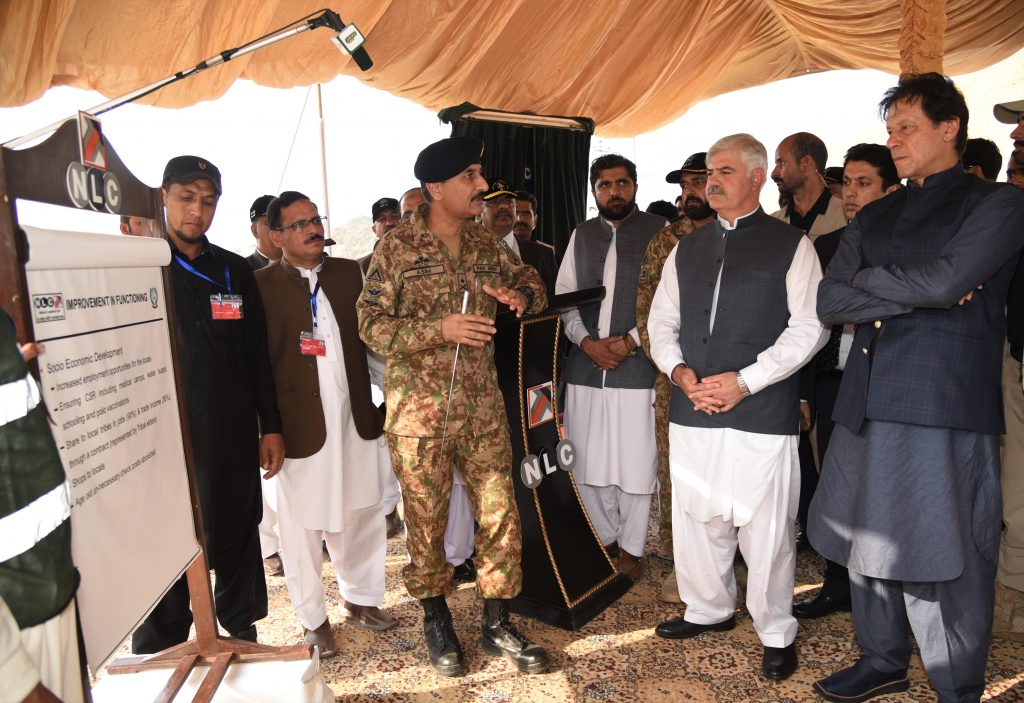 The Premier stressed that Afghan peace is in the best interest of Afghan people and the people of Pakistan. He maintained that Pakistan has tried its best to improve its relations with Afghanistan, and will continue making efforts.

Commenting on the stalled Afghan reconciliation process, the Prime Minister said Pakistan will make maximum efforts to ensure the resumption of the peace process. The premier stressed that it will give a gross misfortune if the Afghan peace talks do not resume, and the Taliban do not get a chance to participate in the Afghan electoral process.

Prime Minister Khan said that Indian Prime Minister Narendra Modi is an “extremist” who has kept the innocent people of occupied Kashmir under curfew for 45 days.

He noted that the stalled peace process between the United States and the Afghan Taliban, is an “unfortunate” development for both Afghanistan and Pakistan. Imran Khan said, “We will try our best to make sure that the dialogue is resume and we move forward towards peace.”

Responding to a question, Imran Khan said that Pakistan was only facilitating the US-Taliban dialogue and was not a participant in the talks, hence, the PTI-government had discovered that the dialogue had been stalled “through newspapers”.

The Premier said that if the US-Taliban talks had concluded successfully, he would have focused on facilitating dialogue between the Afghan government and the Afghan Taliban.

Prime Minister Imran Khan said that during his upcoming meeting with US President Donald Trump, scheduled for Monday, he will insist the US government to resume the Afghan peace process.

No Dialogue with India

Prime Minister Imran Khan made it clear that Pakistan will not initiate any talks with New Delhi until the curfew in occupied Kashmir is lifted, and India has revoked all its unilateral and illegal decision taken across the disputed Himalayan territory.

He said, “There is no chance of talks between India and Pakistan until India lifts the curfew in Kashmir and reverses the abolishment of Article 370.”

Read more: There is no dialogue until Kashmir Curfew is lifted: PM Khan’s NYT article

He said that India has been occupied by racist and extremist Hindus, and the RSS ideology is fuelled with hatred against Muslims and Pakistan. Prime Minister Khan pledged that he will forcefully present the case of the Kashmiri struggle like it has never been presented before at the UN General Assembly session.

Prime Minister Khan said that Indian Prime Minister Narendra Modi is an “extremist” who has kept the innocent people of occupied Kashmir under curfew for 45 days. Responding to a question, he warned the Pakistan people thinking of going to Kashmir to “fight Jihad”.

The premier said that anyone who undertakes this agenda will be doing a “disservice” to the people of Kashmir. He said that if anyone from Pakistan crosses over to the occupied valley of Kashmir, New Delhi will “find an excuse” to oppress and torment innocent Kashmiri using the excuse of cross-border terrorism.

The Premier observed that India is faced with constantly escalating international pressure, “but if anyone decides to cross the border from Pakistan, I will say that they are the enemies of both, Pakistan and Kashmiris.”

Condemning the Ghotki incident of mob violence against Hindus and the destruction of Hindu properties, Prime Minister Imran Khan regarded the incident as a conspiracy against the nation ahead of his upcoming address at the UN General Assembly. He said that the attacks targeting religious minorities are contradictory to Islamic teachings and the constitution of Pakistan.

The premier also reiterated his stance on brokering a deal with corrupt former leaders. He said that no NRO will be provided to former rulers who plundered the nation’s wealth and emptied the national exchequer.

Previous articleKasur incident: Shahid Afridi wants the rapists to be hanged publically
Next articleImran Khan working on bringing Madrassas in fold to provide Equal Education to all

21 May 2022
Load more
Previous articleKasur incident: Shahid Afridi wants the rapists to be hanged publically
Next articleImran Khan working on bringing Madrassas in fold to provide Equal Education to all

How to live a productive life?

India orders installation of CCTVs in each & every corner of Kashmir

No NRO for the Corrupt Until I am Alive: PM Imran Khan