After surpassing PM Modi in the popularity stats even before maiden UNGA speech, PM Khan continued to be a global social media phenomenon. 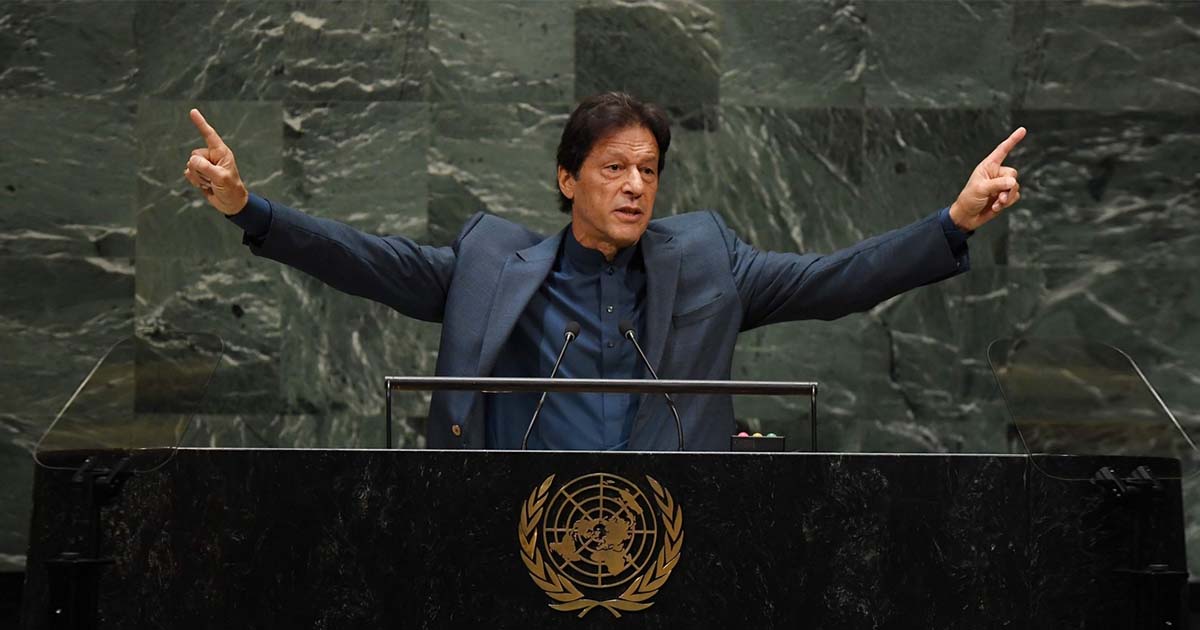 Yesterday premier Imran Khan shook Pakistan and the world with his maiden UN speech, shedding light on the rise of Islamophobia, money laundering, the climate change and Kashmir cause-all of which is affecting Pakistan adversely.

#ImranKhanVoiceofKashmir was a worldwide top trend and Google revealed that Imran Khan was the second most searched for leader on the search engine ahead of Narendra Modi.

Mesmerized with his speech, the social media felicitated Prime Minister Khan and his delegation including Foreign Minister Shah Mehmood Qureshi, and Pakistan’s permanent ambassador to UN Maleeha Lodhi for leading a vigorous campaign for Pakistan at the international forum.

From celebrities to politicians and even Indians had something to say on PM Khan’s assertions at UN.

Finally got to watch the speech… @ImranKhanPTI you make us proud!!♥️🇵🇰

Our PM’s address to the UNGA was awe inspiring. So glad that we have a leader who so eloquently put our case to the world. The UN has to take heed & end the oppression in Kashmir. Remember the Pakistani nation are like cornered tigers don’t provoke us! 🇵🇰#ImranKhanVoiceOfKashmir

No one has ever represented not only Pakistan but 1.3billion Muslims the way PM @ImranKhanPTI did today during his speech at #UNGA2019 A true leader spoke 2day who has the right to represent Muslim world.May Allah protect him and make him achieve what he is willing for Humanity

This is the stuff leader's are made of. A heartfelt, sensitive, well backed and impassioned plea for #HumanRights and awareness by our PM @ImranKhanPTI to the United Nations General Assembly.@PTIofficial.

Prime Minister Imran Khan packs a powerful punch with his eloquent speech and tremendous passion. As a truly dynamic leader, he gets the message across loud and clear. So proud of him! #UNGA2019 pic.twitter.com/n9jlZ6LbzK

Pakistani politicians, commentators, and anchorpersons were amazed by PM Khan’s substantial speech, which forced even his staunch critics to laud him.

This speech could not have been any better…https://t.co/Af6pOWjzrV @ImranKhanPTI spoke like a true statesman and representative of not just Pakistan but the Muslim world. Articulate, clear, forceful and more than everthing else…honest. #UNGA2019

Lmao 😉
That's it? Too low from a news agency's official handle though. https://t.co/QxYnOLaPUK

PM Imran Khan delievers one of best speeches of his life. He has rightly warned deadly consequences for Kashmiris,Pakistani and Indians. Its high time sanity must prevail. Indian @PMOIndia & @ImranKhanPTI should meet,sit,show leadership and save region from catastrophe& disaster.

Absolutely! Credit is due. Let's put aside our battles for one day.
For Pakistan 🇵🇰🇵🇰🇵🇰 https://t.co/VdIfghumQI

The criticism pouring in from his critics was reduced to the assertion of alleging PM Khan for not presenting a strong case of Kashmir at the UN. Including Bilawal Bhutto Zardari, the chairperson PPP expressed displeasure over ‘not saying enough’ at the UNGA. Others believed that his assertions of Islamophobia and money laundering were unnecessary.

Disappointed PM did not make stronger case for Kashmir’s right to self determination as enshrined in UN resolutions. The fate of the people Kashmir must be decided by the people of Kashmir not Islamabad & Delhi. 1/2

Why did Imran Khan use up time to talk about offshore accounts in Pakistan? His own party has them! Then more on army training jihadis etc! Why?Then long rambling history lesson! Red time light beeping and he begins so late on Kashmir!! This is not a container!

We were told #Kashmir and only #Kashmir would be the focus of #UNGA address!