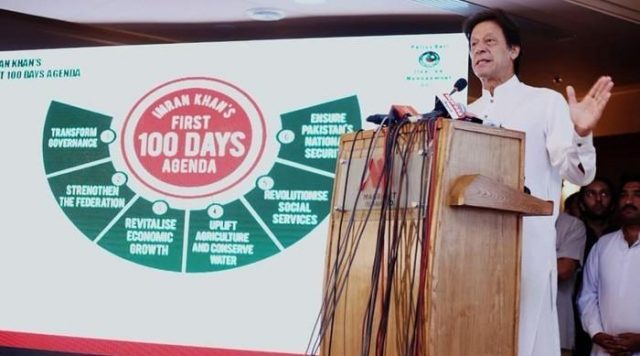 The Pakistan Muslim League-Nawaz (PML-N) senior leaders have vigorously criticized PTI’s ambitious 100-day agenda, calling it a shoddy copy of their 2025 vision. The ruling party reacted sourly to Imran Khan’s agenda which aims to change the policies of the country in the first 100-days of the government if PTI comes into power.

On May 20th, PTI presented the 24-page 100-day plan to be implemented if PTI came in to power. The 11 point was laid out by Chairman Imran Khan at the historic jalsa in Lahore.

The six themes of the agenda include transforming governance, strengthening the federation, revitalizing economic growth, uplifting agriculture and conserving water, revolutionizing social services and ensuring Pakistan’s national security. Under these themes, the PTI government is willing to ensure the merger of the Federally Administered Tribal Areas (FATA) with Khyber Pakhtunkhwa (KP) and the bifurcation of Southern Punjab on administrative grounds.

Most of the mainstream political parties have severely criticized the plan and termed it a political gimmick to lure voters.

In a press conference which was canceled a day before, ministers of the PML-N government including Interior Minister Ahsan Iqbal, Finance Minister Miftah Ismail and Special Adviser to PM for Revenue Haroon Akhtar Khan lambasted PTI for presenting an unrealistic agenda, which is utterly impossible to accomplish.

Ahsan Iqbal, who is also the Minister for Planning, Development, and Reforms, claimed that PTI’s plan is plagued with internal contradictions. He further accused PTI of copying the PML-N’s vision 2025. “Even, if PTI wanted to copy our vision, they should have used their brain to do it,” the minister added.

Pakistan can only be won over with performance and PML-N is the only party which has performed remarkably well in last 5-years, he asserted.

Earlier, opposition leader Khursheed Shah claimed that PTI has no right to present a 100-day agenda. He termed it pre-poll rigging.

Iqbal also claimed that PTI had no right to present the 100-point agenda without shedding light on its ‘progress card’ in KP in last 5-years.

The newly inducted Finance Minister, Mifta Ismail used the numbers to conclude that PTI’s 100-day plan is a farce.

Since the public will have to bear the cost of the PTI’s extravagant agenda. It was important to present the real picture using numbers to demonstrate that it is not achievable at all.

He said, if PTI decides to go ahead with its plans to create a new province in Punjab, taxpayers will have to bear the expense of Rs50 billion. Moreover, the creation of 10 million jobs would cost approximately Rs140 billion, and the proposed reduction in the electricity cost would require another Rs55 billion. Similarly, if PTI extends an incentive package for exports, it will have to dole out another Rs100 billion.

Overall, PTI will spend a staggering Rs 1,598 billion in a year. In addition, in its five tenure, PTI will end up spending Rs 8 trillion – more than the PML-N government’s current expenditures.

Pakistan has been relying heavily on external debt to continue its operations.

In PML-N’s tenure, Pakistan accumulated record debt. Pakistan’s external debt increased from $60.90 billion in May 2013 to $91.76 billion in May 2018, which is the increase of 51%. Mifta believes if PTI sticks to its agenda, the Federal Government debt will increase by a whopping 67%.

The PML-N leaders made two claims in general; the first was that PTI’s agenda is unrealistic and secondly, PTI’s government has completely failed in KP.

Asad Umar, who will hold the portfolio of the finance minister, said that if PTI comes to power, PTI’s economic policy will be formed by the consensus of eminent Pakistani economists.

In a video message recorded in response to PML-N’s press conference, Asad Umar ridiculed the PML-N government for showing hypocrisy. He said, PML-N claims that we copied their 2025 vision and it is an impractical and pragmatic agenda.

If this is so, then PML-N must decide which one of these two was correct because both cannot be possible at the same time.

Most of the economists who were asked to give a feedback on PTIs plan termed it an impossible target, unless the economy performs spectacularly and outperforms all the expectations and therefore, it may become one of the fastest growing economies in the world.

US is destined to lose Afghan War with or without Pakistani bases: PM IK writes in Washington Post