PML-N may support Aitzaz Ahsan, only if he apologizes to Nawaz: Pervez Rasheed 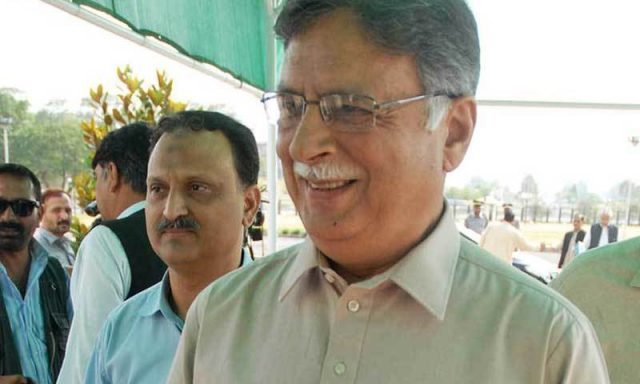 The Pakistan Muslim League-Nawaz (PML-N) has decided to back the Pakistan Peoples Party (PPP) presidential candidate Ch. Aitzaz Ahsan. But the PMLN leader Pervez Rasheed has also said that his party will support Mr. Chudhary Aitzaz only if he apologizes to the party supreme Nawaz Sharif. It is interesting to mention here that the two mainstream political parties were found at loggerheads when the PPP decided not to vote for the PML-N president in the Prime Minister Election.

The PPP decided not to vote in the Prime Minister election because the party leader Asif Ali Zardari did not approve Shehbaz Sharif as the candidate for the high executive post. Earlier it was expected that Shehbaz Sharif will be the candidate for the slot of Prime Minister by the joint opposition. But sources revealed on 17th August that a consultative meeting took place at the chairman secretariat where the PPP deiced to remain ‘indifferent’ during the election. The meeting was chaired by PPP Chairman Bilawal Bhutto Zardari and co-chairman Asif Ali Zardari.

The PML-N, however, has to keep into mind that the spilt in the opposition will ultimately benefit the government. This is what can unite the opposition despite some of the prevailing issues.

Why did Asif Ali Zardari not Approve Shehbaz Sharif?

President of the PML-N Shahbaz Sharif once alleged that President Asif Ali Zardari was a callous man as he had ordered foreign doctors treating dengue patients in Punjab to suspend their operations. Addressing a press conference here on May 09, 2013, he claimed that the president had asked the doctors to stay in Karachi instead of treating patients in Lahore. Shehbaz Sharif further said that he was even ready to take the oath and appear before the Supreme Court over his claim.

He also said that when the PML-N would come into power “they will drag [former] President Asif Ali Zardari in the streets of Larkana, Karachi and Lahore if it comes into power.” Mr. Shehbaz has termed Mr. Zardari a plunder, corrupt and a person of questionable character many times during his public speeches. According to sources, due to derogatory language used by the president of the PML-N against the former President, the latter was not willing to vote for the former.

This rift in the joint opposition was clear at the initial stages when MaualnaFazulRehman presided over a multi-party conference to present their reservations over the alleged rigging during the general elections. The differences between the mainstream parties helped Imran Khan who had already the simple majority to become the prime minister.

President of the PML-N Shahbaz Sharif once alleged that President Asif Ali Zardari was a callous man as he had ordered foreign doctors treating dengue patients in Punjab to suspend their operations.

Nawaz Sharif and his daughter Maryam Nawaz have been given 10 and 7 years imprisonment respectively. Mr. Ch is known for his critical remarks about the former PM Nawaz Sharif and some of his cabinet members. It is unlikely that Mr. Ch who enjoys unshakable repute across the political and legal communities will apologize for his quite reasonable remarks.

If Aitzaz Ahsan apologizes to please the leadership of the PML-N, it will be tantamount to surrender before the party president and former PM. Moreover, the PML-N had to face utmost humiliation at the hands of PTI’s Imran Khan who managed to defeat Shehbaz Sharif single-handedly. Now the PML-N is in a position to give tough time to ‘uncompromising’ Asif Ali Zardari and the PPP.

The PML-N, however, has to keep into mind that the spilt in the opposition will ultimately benefit the government. This is what can unite the opposition despite some of the prevailing issues. The senior leaders from both parties are trying their level best to bring the opposition at the same page in order to organize a joint opposition and give a tough time to Imran Khan, who is eager to implement his idea of change and Naya Pakistan.

Amina Saeed - 31 July 2021
Various areas of Islamabad faced severe damages after a cloudburst that caused urban flooding in the Federal Capital of Pakistan. According to the meteorological...

Analyzing the dynamics of institutional imbalance in Pakistan

Manzoor Pashteen spoke up in Lahore; what’s the solution to their problems?