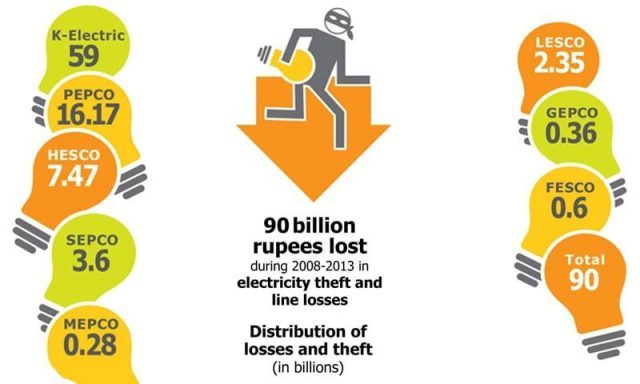 The Ministry of Energy (Power Division) on Monday admitted that Pakistan’s deplorable old transmission system is the main cause for load shedding and major breakdowns across the country.

The power division reported that the absence of political will to address the chronic crisis along with the inability to make recoveries, increasing receivables and power losses are the main hurdles which the power sector faces.

More needs to be done to overcome the structural and chronic problems facing the transmission and distribution tiers of the electrical network of the country.

The ministry admitted before the parliamentary panel that ineffective transmission system was unable to pick and transport the power despite an increase in the power generation ability.

Secretary Power Yousaf Nasim Khokhar admitted that shortfall facing the country remains almost unchanged at 4,559MW in the first week of June 2018 as compared to 4,530MW in July 2017.

The officials admitted that currently, demand stood at 23,301MW while the power generation was 18,742MW.

But it did claim that system was able to record 20,800MW power generations in the current year, but distribution system lacked the ability to pick it. Moreover, the distribution companies are facing high losses and have no funds to improve their power systems, Khokhar remarked.

“There is a culture of collusion and corruption in the (power) system that we consider a part of the governance problem,” Khokhar added. He blamed provincial governments for not paying heed to letters written to conduct the meetings to address theft and recovery issues.

The previous government of PML-N had always been claiming that it added 10,000 to 11,000 MW electricity in the system and it had more surplus power. But after the government’s tenure, power ministry officials have completely refuted these tall claims. It said that Pakistan is currently facing 4,599MW shortfall and demand and supply situation remains unchanged from previous year.

The NTDC commenced operations in December 1998 to deal with the transmission of energy from generating stations to the distribution network.

It also nullified the figures quoted by the ministry during the PML-N era. It blamed the previous governments for focusing more on power generation and ignoring overhaul of transmission lines and distribution.

After the current surge in the load shedding during Ramadan, National Electric Power Regulatory Authority (Nepra) had reprimanded Transmission and Dispatch Company (NTDC) and blamed it for not addressing the issue. Nepra accused NTDC of not improving the transmission issues despite huge investment of Rs96.63 billion in last three-years.

The ministry also argued that power division had demanded the allocation of Rs20 billion from the federal Public Sector Development Program (PSDP) for improving their distribution systems. But the government refused to allocate the necessary funds.

The receivables of the sector surged by 46 % to Rs 633bn last week from Rs 434 bn in June-2015. Discos claimed that it would cut off the defaulters after two months of non-payment, but receivables against disconnected defaulters stood at Rs99 billion.

Despite the decline of 6.41% in the government sector receivables, the power division also failed to make inroads to decrease it decisively as it remains at Rs146 billion against the Rs156 billion in 2015.

To make matters worse, this decline was due to Rs50bn write off allowed by the PML-N government to Sindh government in 2016. If one takes into account this figure, receivables from government sector have in fact increased 21% from Rs. 115 billion in 2017 after the write-off of Rs50 billion from Rs.169 billion in 2016.

Moreover, the distribution companies are facing high losses and have no funds to improve their power systems, Khokhar remarked.

The private receivables also witnessed the increasing trend. The system losses have soared by 0.4 % and recovery of bills declined by 3.6% this year.

Moreover, theft and failure to make recoveries hampered the division. Ministry proposed that privatization of power sector and provincial takeover of Discos may resolve the chronic issues. The feeders should be leased out to local contractors who can challenge electricity theft.

Adding generation capacity is a step in the right direction. The government should be lauded for power generation. But, its failure in transmission and distribution has put the question mark on its performance.

Electricity issue can be resolved if the government ensures that generation, transmission, and distribution operate effectively to ensure smooth supply of electricity where there is demand.

It is entirely possible that we may have a system with excess generation capacity but without an effective way to make sure that energy actually reaches the consumer. This is exactly what is happening currently, which can only be overturned with political will and actions rather than mere rhetoric and slogans in public gatherings.