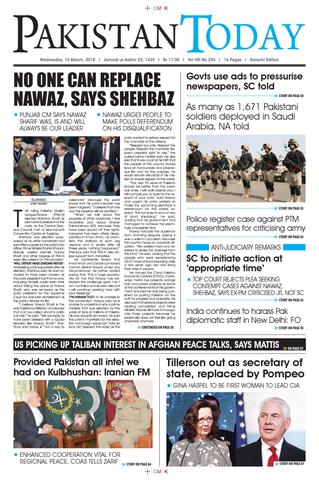 Shehbaz Sharif, Chief Minister, Punjab and the recently elected president of Pakistan Muslim League Nawaz is making frequent visits to the Pakistan People’s Party-ruled Sindh and its capital city, Karachi, in a bid to bag support of his former political rivals.

Shehbaz Sharif – who is considered more suitable than his brother when it comes to negotiations with political players and establishment – made his maiden trip as party head to Karachi on April 14th; however, his Sunday visit to the city is aimed at gaining the support of crumbling Muttahida Qaumi Movement and Awami National Party.

Although the firebrand leader denied having any political ambitions behind his tour – second in a span of ten days – even then the political commentators are witnessing the cementing of ties between PML-N and MQM with suspicion.

The Chief Minister Punjab met Shahi Syed, the leader of Awami National Party, and vowed to work jointly to improve Karachi’s situation, however, his huddle with Khalid Maqbool Siddiqui, leader of MQM Bahadurabad faction is of prominence in the purview of current political scenario.

What has set the tongues wagging is the fact that Shehbaz is focusing Sindh at a time when scores of lawmakers associated with the party in Punjab are jumping off PML-N’s ship, giving credence to the perception that Pakistan Muslim League Nawaz is playing a two-fold game with the parties of Karachi.

At one end, the Pakistan Muslim League Nawaz can assure MQM of its support, while at the other end; it can also fill the vacuum created by the purge of ethnic parties in the wake of Altaf Hussain’s anti-Pakistan tirade and ANP’s fragile position in the province.

Although things seem to be hunky dory between Punjab-centric Pakistan Muslim League Nawaz and Sindh-centric Muttahida Qaumi Movement now, the political players have never been on the same page.

Historically, the 1990s operation launched in mega-polis was under the instructions passed by Nawaz Sharif, former prime minister and even after assuming power in 2013, the Karachi operation had Nawaz Sharif’s backing, though Rangers and armed forces had a major say in the execution of the activity – for keeping it apolitical and widely transparent.

Moreover, Mutta­hida Qaumi Movement-Pakistan had also expelled Senator Mian Ateeq from the party for voting in favor of Pakistan Muslim League-Nawaz over the Election Bill 2017, however, it voted in favor of Shahid Khaqan Abbasi, as the Prime Minister of the country after the disqualification of Nawaz Sharif in the Panama Papers Case.

Even recently, when Pakistan Tehreek-e-Insaf and Muttahida Qaumi Movement came closer in a bid to replace Khursheed Shah, the Opposition Leader, Pakistan Muslim League Nawaz unleashed scathing allegations against Imran Khan for having partnered with his ideological rival, however, the party is now joining hands with MQM, just weeks before the next general elections.

Earlier, in 2010, Nawaz Sharif had categorically accused the Muttahida Qaumi Movement of killing innocent people in Karachi; blaming the party for the May, 12 carnage as well.Ignoring the historical perspectives of bittersweet ties between PML-N and MQM, there is a special aspect of the current nearness.

Pakistan Muslim League Nawaz is in a jeopardy to make electoral alliance with its former rivals including MQM – which is also looking for support from Sharifs, in a bid to gain face-saving seats in the upcoming elections.

Pakistan Muslim League Nawaz – which has been decrying mafia style politics in Karachi while having a handful of Gullu butts in Punjab –  might be thinking of giving a strong message to the establishment by siding with MQM – a party which holds ‘hidden forces’ as a reason behind its weakening majority in the province.

Read more:Nawaz Sharif may create the perception of winning public front, but…

After the disqualification of Nawaz Sharif as Prime Minister and his ineligibility to lead Pakistan Muslim League Nawaz, the ruling party feels and expresses, in a veiled reference that the establishment is behind the bundle of woes, unfolding every other day.

The allegations against establishment echoed with the claims made by MQM that the party was being muzzled, in the backdrop of Mustafa Kamal-led Pakistan Sarzameen Party’s growth.

With Shehbaz Sharif as the party president and repeated denials of support by Asif Ali Zardari, Pakistan People’s Party co-chairman, Pakistan Muslim League Nawaz is in a jeopardy to make electoral alliance with its former rivals including MQM – which is also looking for support from Sharifs, in a bid to gain face-saving seats in the upcoming elections.