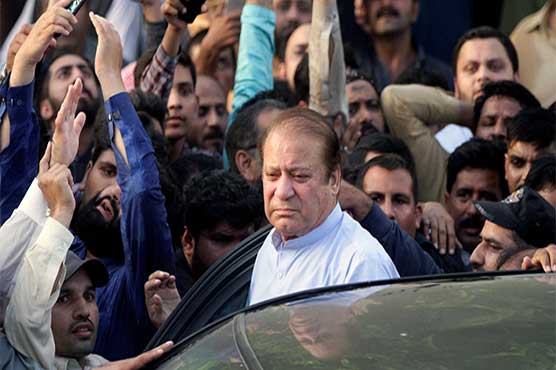 Nawaz Sharif’s disqualification, by Supreme Court of Pakistan, from the office of Prime Minister has led to a barrage of incendiary rhetoric from Pakistan Muslim League-Nawaz (PML-N) leaders. The PML-N, its supporters and sympathizers argue that the judicial ouster of Nawaz has little weight in law and that it was the result of a conspiracy to undermine democracy orchestrated by the “establishment”.

Nawaz loyalists, in their onslaught against the “establishment”, have termed the grounds of the disqualification a “minor technicality” of little significance.

However, a careful examination reveals that PML-N’s arguments in defense of Nawaz and their claimed grievances lack substance.

Grounds for the Disqualification

By receiving a salary from Capital FZE, Nawaz met the requirements for maintaining his UAE work permit or “iqama” which was valid until a year after his being elected as Prime Minister of Pakistan.

The grounds specified by the Supreme Court for the disqualification of Nawaz Sharif centered on his failure to declare a monthly 10,000 AED salary which was deposited into a bank account under his name from August 2006 to April 2014 by a UAE based company, Capital FZE. This company was founded by his son, Hussain Nawaz.

UAE law firm Khalifa bin Huwaidan Advocates had confirmed that Nawaz was employed as chairman of Capital FZE and that the payments continued for a year after Nawaz was elected to office.

At the heart of Nawaz Sharif’s claims of innocence lies the assertion that his “Iqama” was merely for visa purposes during his years of exile in the UK, the 10,000 AED salary does not constitute as an “asset” because it was never drawn. However, his “Iqama” was renewed in 2012, despite the fact that he was key opposition leader in Pakistan, with his party, PML-N, ruling the largest province of Punjab; and getting UAE visas was no more a problem. And the issue of the salary being a “receivable asset” or not is also not that simple as the PMLN apologists make it seem.

Nawaz’s supporters are merely making a “technical” defense, generally called “smart lawyering”. Because a bit of careful examination of the facts reveals that it is only by receiving a salary from Capital FZE, that Nawaz met the legal requirements for maintaining his UAE work permit or “iqama” which was valid until a year after his being elected as Prime Minister of Pakistan. Without receiving the salary, and its legal admittance, Nawaz’s “Iqama” could not have been valid, under the laws of UAE.

UAE law requires holders of work visas to receive a minimum of 10,000 AED monthly salary to maintain their visa status. Nawaz had signed a labor contract with Capital FZE and therefore was a legally employed in the UAE.

The monthly payments, in UAE, were “receivables”, legally and practically, meaning that they were paid into Nawaz’s account, as per law, and could be drawn if and when Nawaz so wished. Within UAE, these were “receivables” and without their being “receivables” Nawaz’s “Iqama” could not have been valid. Nawaz claiming subsequently that these don’t constitute “receivables” under the Pakistani Income Tax laws because he never withdrew them is more of semantics or at best defending himself through weak legal technicalities.

Hence, despite multiple statements by Nawaz Sharif, PML-N leaders and supporters dismissing the SC verdict, there can be no disputing the fact that the salary received from Capital FZE constitutes an asset. Moreover, Nawaz’s claim that he needed “Iqama” only for visa purposes is also less than convincing; given the fact that it was renewed in 2012 – when visas was not a challenge anymore. Claims of “Iqama” for “visa” have been insufficiently scrutinized in Pakistani media – but given the sequence of events they look “suspect”. There could have been other benefits accruing from maintaining “Iqama” in UAE, as some financial experts have argued. Overall Nawaz Sharif admitting facts in one jurisdiction (UAE) and denying them in another (Pakistan) merely on technical grounds makes a very poor defense. And for a top political office holder of a country, defending this strange inconsistency on technical grounds is mystifying to say the least.

Representation of Peoples Act (ROPA), 1976, clearly states that a candidate is liable to be rejected for nomination to the Parliament if he “submits any false or incorrect declaration or statement in any material particular”. The Supreme Court hence adjudicated that failure to disclose the salary from Capital FZE was legitimate grounds for Nawaz Sharif’s dismissal.

“Where respondent No. 1 did not disclose his aforesaid assets, it would amount to furnishing a false declaration on solemn affirmation in violation of the law mentioned above, therefore, he is not honest in terms of Section 99(1)(f) of the ROPA and Article 62(1)(f) of the Constitution of the Islamic Republic of Pakistan,” the SC concluded.

Legal experts have repeatedly stressed the importance of recognizing the reality behind PML-N’s rhetoric with some senior pundits terming the vehement speeches as no more than struggling breaths of a drowning breed of politics.

Supreme Court’s judgment disqualifying Nawaz Sharif – ignoring the fact that the highest office holder in the land was employed in a foreign company, in itself an unprecedented notion – is by no means a breach of judicial norms and is in line with the law and constitution.

(Writer is legal correspondent and researcher with GVS; analysis has additional input from Editor’s Desk)

Previous articleIs the failing Foreign Policy causing a drop in remittances for Pakistan?
Next articleYounger Sharif to be the next PML-N chief: how will Nawaz maintain his influence?

25 September 2021
Previous articleIs the failing Foreign Policy causing a drop in remittances for Pakistan?
Next articleYounger Sharif to be the next PML-N chief: how will Nawaz maintain his influence?

Pakistan can make fighter jets and tanks, but not cars and mobiles, complains Chaudhary

Prime Minister all set for trip to Beijing: CPEC is flagship project of OBOR