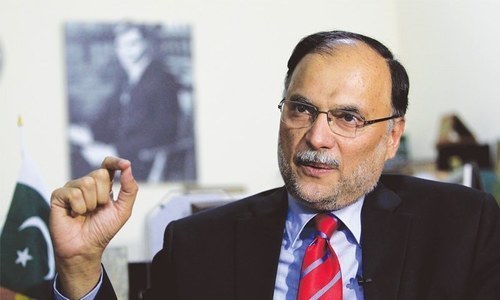 There are 206 bones in the human body. And all the bones in the body of PML-N have been fractured, leaving it severely injured. Looks like it can barely stand without the help of crutches – let alone rule the country.

After coming into power thrice, this party still doesn’t know how to run its institutions and how to govern. If anyone in the world wants to understand what sheer incompetence is, then he/she just needs to turn towards Pakistan and observe the style of (bad) governance of its ruling party – not to forget that the ruling party is headed by an individual, disqualified by the Supreme Court of Pakistan.

PML-Nawaz has been making a big deal out of Nawaz Sharif’s disqualification but it’s actually no one but Nawaz Sharif, who got himself bullied into public shaming time and again.

Ending it with a reminder for you: Pakistan Muslim League (N) was the same party that exploited Laal Masjid operation and held Army and General Musharraf responsible for the loss of life in that operation.

People in a developing country like Pakistan, over certain matters are extremely sensitive and emotional like drone attacks and violation of its territory, Indian atrocities in Indian Occupied Kashmir, and last but not least the Finality of Prophethood and blasphemy.

The government knew that their amendment has hyped up the sentiments of people to an extent, where they won’t back off from their demand of resignation of the Law Minister, Zahid Hamid.

Speculation about Zahid Hamid resigning sooner or later, in the inner circles of PML-N and the media, had been surfacing since the beginning of this sit-in.

Everyone sensed that government was going to force his resignation but then why was it not offered before the operation? Had it been offered earlier, it would have avoided the build up of rage and anger inside the protestors against the government and those who lost their lives in that police operation could have been saved and the government also would have been in a better position to negotiate and convince the TLYR and Khadim Rizvi to end the sit-in. All would have ended peacefully.

One wonders, what was the purpose of this whole exercise of amending the clause and then reverting the amendment? It maybe to save the House of Sharifs by provoking the Army to forcefully handle the sit-in and take charge and yet again make this government appear as a victim of civil military tensions.

Unfortunately, there have been many factors but currently for the last four and a half years mainly because of PML-N, this country, its institutions and its governing structure has become a joke.

Ayaz Amir a prominent columnist and analyst raised a question in a programme that the nation had been suffering for weeks all over the country, why could they not offer one man’s resignation earlier?

Well, whatever the motives of the government were and whatever it has achieved with all this chaos, one thing that is clear is that they deliberately delayed solving this issue and avoided going for the jugular.

Frustratingly, for about two days, all the private news channels and social media were shutdown. When the transmission of electronic media was restored, I turned on the TV and what I saw was utterly disappointing.

While the state is burning, Pakistanis fighting their fellow countrymen, damaging public and private properties, putting the vehicles on fire, tear gassing, baton-charged, stone pelting; our Minister of State for Information and Broadcasting, Maryam Aurangzeb, was cutting a cake on PTV celebrating its 70th birthday. All the eyes of the world on us keenly observing this mockery of democracy.

The government is dysfunctional, lacking authority and a sense of decision-making. The ruling party’s lawmakers’ and their residences were attacked by the protestors in Islamabad and yet Maryam Aurangzeb found a reason to celebrate on national television – makes me sick to my stomach.

Nabeel Gabol, spokesman of Pakistan People’s Party in a talk show predicted that the minute Senate elections to be held in 2018, are announced, Prime Minister Shahid Khaqan Abbasi would dissolve the assemblies.

Had I been with the protestors on the roads and had I seen Maryam Aurangzeb cutting a cake and celebrating on national TV while my country, its image and economy suffered like that because of her government, I would have demanded the lady’s resignation too for being this insensitive.

Our current situation reminds me of a song “Burning down the house”. Government officials and PML-N voters should listen to this song on repeat as its very relevant to what they have put us through.

Furthermore, even after signing an agreement with the TLYR cleric in Islamabad, several areas of Lahore are still locked down and protesters are now demanding the resignation of Rana Sanaullah, Law Minister of Punjab, for his irresponsible statement that he gave on media declaring Ahmedis as Muslims – (And another resignation is on its way too).

Nabeel Gabol, spokesman of Pakistan People’s Party in a talk show predicted that the minute Senate elections to be held in 2018, are announced, Prime Minister Shahid Khaqan Abbasi would dissolve the assemblies.

Haroon Rashid a prominent analyst and columnist on a current affairs programme supported the idea of dissolving the assemblies put forward by Pakistan Tehreek e Insaf, if the government fails to reinstate its writ. The option for dissolution of assemblies should be discussed with all the three branches of government and stakeholders – Judiciary, Legislature, Army, Executives, Opposition, etc.

Well, whatever the motives of the government were and whatever it has achieved with all this chaos, one thing that is clear is that they deliberately delayed solving this issue and avoided going for the jugular.

Government’s spokesperson Dr. Tariq Fazal Chaudhry, Minister of state for Capital Administration and Development, in a talk show last night, was asked, “Who exactly is the decision maker? Is it Shahid Khaqan Abbasi or Nawaz Sharif?” To which Dr. Tariq Fazal replied, “When Pakistan People’s Party was in power, their Prime Minister was Syed Yousaf Raza Gillani but the party was headed by Mr. Asif Ali Zardari, who had the final say in every matter, similarly our government’s   Prime Minister is Shahid Khaqan Abbasi but our party is headed by Nawaz Sharif.”

Having said this, Dr. Tariq Fazal evidently admitted that it’s none other than Nawaz Sharif whose holding the steering wheel even after facing humiliating disqualification by the Supreme Court.

Unfortunately, there have been many factors but currently for the last four and a half years mainly because of PML-N, this country, its institutions and its governing structure has become a joke. They have failed at every level from governing to resolving conflicts.

Moreover, this government is also known for holding the reports back. They were already facing criticism for not making Justice Baqir Najfi’s report public, and now they have held back Raja Zafar ul Haq’s report on this sensitive issue too?

Salman Ahmad, prominent musician and a Pakistani who feels for his country holds PML-N responsible for whatever Pakistan is going through at the moment and tweeted, “Newton’s law: For every action there is an equal & opposite reaction. When you subvert the run of law (like Sharif has done) law of the jungle prevails. The entire blame falls on PML-N leadership which has allowed a criminal ex PM to embolden all criminals & fanatics.”

According to Aristotle, “Democracy is, when the indigent, and not the men of property, are the rulers.”

A lot would change in the face of Pakistani politics after National Accountability court gets to decide the future of House of Sharifs – for them the sky could fall. But what is yet to be seen is how PML-Nawaz is going to get this highly sensitive issue defused while they’re in power, saving the social fabric of the country from further damage.

Ending it with a reminder for you: Pakistan Muslim League (N) was the same party that exploited Laal Masjid operation and held Army and General Musharraf responsible for the loss of life in that operation.

Will PPP rescue Nawaz after his Memogate regret?

Should FATA merge with KP or become an independent province?