PML-N’s U-turns in Jhelum for the second time, ignored by mainstream media 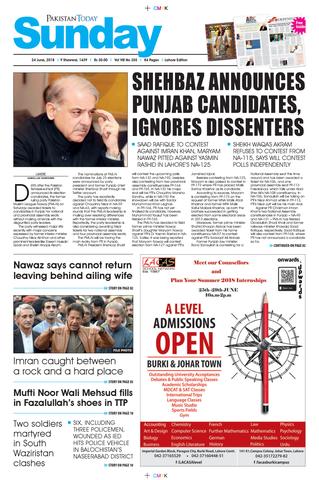 Media is crying foul over PTI’s decision to reverse some of the tickets already issued to candidates. Political parties, and PML-N in particular, term Imran Khan a  naïve politician, who fails to stick to his decisions. But, the reversal of tickets is something which is seen in other parties too, but PTI comes under scanner for all the wrong reasons. The other so-called experienced political parties escape such magnified scrutiny.

Media has highlighted PTI for its decisions on awarding tickets to electables for replacing the party loyalists. But, PML-N is not being judged or scrutinized in the same way. It’s an open secret how Nawaz welcomed electables from PML-Q, who served in the cabinet of General Musharraf. In Jhelum, PML-N made farsical errors which went unnoticed in mainstream media.

PML-N’s potential candidate, Nadeem Khadim was given the green signal in favor of another aspirant Mehar Fayyaz from Tehsil Dina, Jhelum. He is the former MPA from Muftian, Dina. It was reported that after ending the suspense over Jhelum’s constituency NA-66, PML-N handed the ticket for  NA-66 Jhelum to Chaudhry Nadeem Khadim. But later took a U-turn to award ticket to Mehar Fayaaz.

PML-N reversed its decision and issued a notification and replaced Mehar Fayyaz with Nadeem. Jubilant supporters of the local leader celebrated at his residence and thanked Shehbaz Sharif for taking the right decision.

Followings complaints from Chairman’s of different Union Councils, PML-N once again on June 27th over turned its decision, returning the ticket to Nadeem Khadim, making him a candidate for the second time for the same election. PML-N has reversed ticket decisions numerous times, as a matter of status quo.

NA-71-Gujrat IV in the Spotlight

PTI did the same in NA-71. PTI published names of the candidates on its website which included the name of Chaudhary Ilyas- President of Gujrat District. When PTI revised its list a couple of days ago, it removed Ilyas’s name, resulting in uproar from the party workers, already campaigning for him. Though, Ilyas is yet to be replaced, It is believed that party workers in Gujrat and Sarai Alamgir are giving a  hard time to party leadership.

Some sources are claiming that he is still favoured by the higher ups in PTI, but nothing can be said with certainty due to recent antics of the party. PML-N is also in disarray as its local leaders are campaigning against each other. Ex-MNA Malik Hanif Awan is another PTI hopeful.He decided to part ways with the party after it opted to award ticket to Chaudhary Abid Raza.

In 2013, ex-MNA Malik Hanif Awan was asked to run for the Punjab Assembly seat PP-114 instead of NA-71 (formerly NA-107). The seat, he had won by large margins in December 2012 by-elections. It miffed Awan and despite running for the provincial seat, he ran a campaign against Raza and helped Ilyas rake in more votes in 2013 general elections.

Awan family had a long association with the PML-N. Malik Hanif being a Sharif loyalist went through a tough period, when Nawaz was in exile. He also spent huge sums on elections campaigns and sacrificed a lot for the party. In 2013, Hamza Shehbaz replaced Awan with Raza saying that he had a commitment with latter to award him the ticket, even at cost of party loyalist Awan.

He won the constituency in 2013 election with huge margins defeating  Ch. Muhammad Ilyas of PTI by 33,200 votes. Though, Awan did not show much remorse back in in 2013. But, after being ignored once again in favor of Raza, Awan is likely to contest NA-71 independently. He is trying to put together his own independent panel on both the Punjab Assembly seats falling under the NA seat to fight against PML-N.

Ironically, after a fallout with PML-N, Awan had displayed a huge picture of PTI chief at his main election office at his residence. But, soon after the PTI announced to award ticket to Ch. Muhammad Ilyas, the picture was removed. Now, he is back in contention. But nothing concrete has emerged as yet to confirm that who is going to represent PTI from NA-71.

Interestingly, PTI has only nominated Syed Faiz ul Hassan from NA-70 Gujrat-III, it yet to name its candidates on rest of the three Gujrat seats. Rumors are abuzz that PTI will not field its candidates on NA-68 Gujrat-I and NA-69 Gujrat-II and may undergo a seat adjustment with PML-Q against the strong PML-N candidates.

Nevertheless categorically blaming only PTI for U-turns on candidates is not justified. Because PML-N has also experienced the same problems,  but media fails to scrutinize the same way as it does  PTI.

Iraqi jails feared to be once again oozing out Jihadists