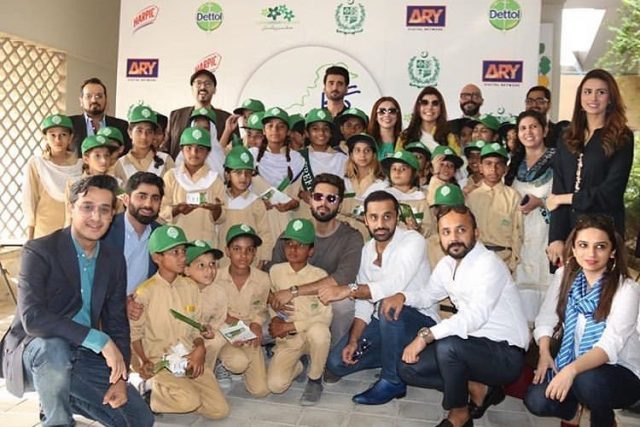 On October 8, 2018, PM Khan, while launching the countrywide ‘Clean and Green Pakistan’ campaign, urged people from all social strata to make it a success by actively participating in it. “This campaign is for our future. Everyone has to partake in it,” the prime minister urged, lamenting: “Pakistan is a gift but unfortunately we haven’t paid attention to its beautification.”

He vowed to make Pakistan a clean and green country by stretching the campaign to every part of the country. The cleanliness drive has three aspects, Mr. Khan explained and added the first aspect of the drive is spreading awareness among people, especially children, about the importance of sanitation and thus incorporate a lesson in this regard in school syllabus of grade-1 to 5.

The Research Data Centre will be the first and only RDC where students could access real-time data of international financial institutions.

Secondly, he said, the people of Pakistan, will be given awareness about dumping sites. He added his government will overcome challenges of load-shedding by generating electricity from trash. The prime minister said there will be contests regarding sanitation at tehsil level every two months and the official concerned would be rewarded or penalized on the basis of the state of cleanliness in their areas.

Emphasizing that the government alone cannot bring about change, PM Khan urged members of the civil society to complement the efforts of the government by creating necessary awareness about sanitation and environmental issues. The decision to launch a cleanliness drive across the country was taken during a meeting of the Council of Common Interests (CCI) presided over the prime minister last month.

The PM’s bid for a clean and green Pakistan has since then been boosted by the participation of several companies in the process. The National Bank of Pakistan is one such key national institution which has started to take part in the process as part of its Corporate Social Responsibility (CSR) activities.

The National Bank of Pakistan (NBP) in a bid to mitigate the impact of climate change and global warming and capitalizing on PM’s Clean and Green Pakistan campaign, planted saplings at Wali Khan University, in Mardan as part of national tree plantation drive of the government.

Pakistan is among the frontline states against Climate Change, it already is feeling the impact of the phenomenon through water shortages and recurring heat waves.

A proposal for the establishment of Research Data Centre (RDC) and its sponsorship by National Bank of Pakistan (NBP) was also discussed at the forum. The planned center access would be given to research students and all major universities of KP. The Research Data Centre will be the first and only RDC where students could access real-time data of international financial institutions.

Moreover, the importance of tree plantation, its uses, and benefits, impact on the environment was majorly emphasized during the meeting. It was also suggested that every student taking admission at the university should plant and adopt a tree and nurture it till their last day at the campus. This activity will inculcate a sense of ownership and responsibility among students.

National Bank: One of the three key financial institutions

The inclusion of NBP in the Clean and Green Pakistan campaign is a welcome sight as Pakistan is in dire need of all hands. NBP is one of the three largest banks in Pakistan – along with Habib Bank and UBL. State Bank requires these premier banking institutions to maintain larger reserves for stability. Pakistan is among the frontline states against Climate Change, it already is feeling the impact of the phenomenon through water shortages and recurring heat waves. Only through the response by key national institutions can the nation save itself from the debilitating effects of Climate change.