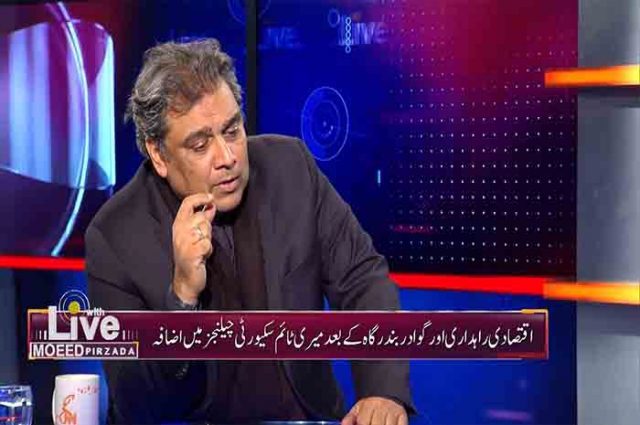 Federal Minister for Maritime Affairs Mr. Ali Haider Zaidi has said that his Ministry is trying to reduce traffic issues, transport expenses, and import bills both in Karachi city and within the sea, KPT and Port Qasim, which will be connected through FADE corridor. “This corridor will be constructed above the water like Hong Kong and Macao models, which will include a rail track, a sea road, and many oil and gas pipelines”, the Minister for Maritime affairs said.

Mr. Zaidi made these statements while speaking to prominent anchorperson Dr. Moeed Pirzada on his Prime-time Show “Live with Moeed Pirzada” at GNN. Mr. Zaidi said that the Ministry is most important and it is the only state-owned enterprise, which is not in loss. This ministry can bring a positive change in Pakistan because the role of ports is undeniable in the case of progression of Singapore and Dubai.

“Military sources said the ship has a fully loaded displacement of about 4,000 metric tons and is equipped with advanced radars and missiles. About 30 Type 054As are in service with the PLA Navy,” the newspaper said, quoting observers.

“I have serious challenges in front of me but there are huge opportunities too,” says the Federal Minister for Maritime Affairs. He added that Gwadar port is lacking train links and facing energy issues. “Many systems have not been incorporated yet,” said the Minister.

“There are huge problems in the case of lands of port Qasim because many illegal allotments have been done there”, the federal minister said. The minister claimed that the capacity of the ports is being increased and night navigation will be started in two weeks. “Obviously, the ultimate end is to enlist Pakistan’s name in the top global Maritime countries Chart”.

While asking about the dilemma of corruption and material lapses Mr. Zaidi said, “you are right but the main purpose is to stop the eminent losses of corruption which will then be directed toward infrastructural facilitation.

Mr. Zaidi claimed that “in 1947, PNSC had 70-75 ships but today they have only 9 ships, out of the four ships have been assigned for importing oil and remaining 5 are for charter and cargo purposes.” “Due to the lack of ships in PNSC last year, Pakistan had paid $4.2billion in import bills to other charter cargo ship companies.” Mr. Zaidi said.

China has started construction of an export version of one of its most advanced warships for export to Pakistan as part of a major arms deal, GVS earlier reported. According to China Daily, China State Shipbuilding Cop, a state-owned defense contractor, is building the warship at its Hudong-Zhonghua Shipyard in Shanghai.

“This corridor will be constructed above the water like Hong Kong and Macao models, which will include a rail track, a sea road, and many oil and gas pipelines”, the Minister for Maritime affairs said.

A statement by the contractor said the ship was a version of the Chinese Navy’s most advanced guided missile frigate. It will be equipped with modern detection and weapon systems and will be capable of anti-ship, anti-submarine, and air-defense operations.

“Military sources said the ship has a fully loaded displacement of about 4,000 metric tons and is equipped with advanced radars and missiles. About 30 Type 054As are in service with the PLA Navy,” the newspaper said, quoting observers. The report said Pakistan Navy had ordered four such ships.

Read more: What are the cornerstones of Pakistan’s maritime security strategy?

It said the warship would be one of the largest and technologically advanced platforms of Pakistan’s Navy and strengthen Pakistan capability to respond to future challenges, maintain peace and stability and the balance of power in the Indian Ocean region.