Police in Lahore summoned in court over missing activist 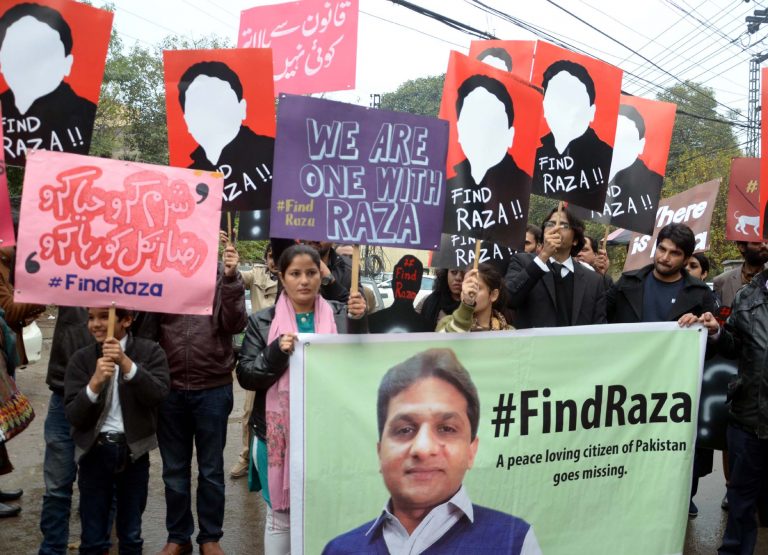 A Pakistani court on Wednesday summoned a police officer investigating the case of a missing peace activist who is believed to have been kidnapped by unidentified men this month.

Four activists critical of the army and its attitude towards militant groups went missing this year but reappeared after about a month. Two later said Pakistani military intelligence agents abducted and tortured them.

“Everyone discussed their views and, of course, Raza was very critical,” said a friend, Rahim-ul-Haq.

The military denied the accusations. The latest activist to go missing is Raza Mehmood Khan, 40, a member of Aghaz-i-Dosti (Start of Friendship) group that works to build peace between archrivalsand India.

He has not been heard from since Dec. 2 and his family filed a writ of habeas corpus in a court in the eastern city of Lahore in the belief he has been unlawfully detained, a lawyer acting for his family said.

The Lahore High Court took up the case on Wednesday and the presiding judge, Anwar ul Haq, asked for the officer in charge of the police station handling the case to appear at the next hearing on Dec. 19.

The lawyer, Usama Malik, told Reuters a neighbour had called police on the night of Dec. 2 to report that Khan was being kidnapped by unknown men.

Khan’s brother and police arrived to find Khan gone, along with his mobile telephones and computer, the lawyer said.

Police were not available for comment on the court summons on Wednesday. Police said earlier they had no suspect in the case and they were investigating.

On the day of his disappearance, Khan had spoken at a forum on militancy.

“Everyone discussed their views and, of course, Raza was very critical,” said a friend, Rahim-ul-Haq.

A Pakistani court on Wednesday summoned a police officer investigating the case of a missing peace activist who is believed to have been kidnapped by unidentified men this month.

Khan had also posted comments on Facebook critical of the military and its suspected link to some Islamist hardliners who at the time were protesting against the civilian government. Liberals in Pakistan have long criticised what they see as the military’s use of some militant factions to further its political and security objectives.

The army denies sponsoring militant factions. It regards security policy, especially towards neighbours India and Afghanistan, as its responsibility.