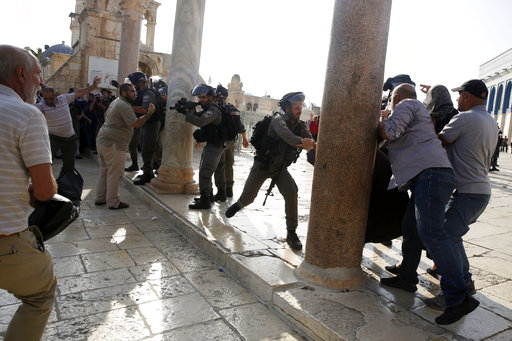 Police reinforcements have been called from different areas of Punjab and deployed in Rawalpindi to maintain peace in the city in case the government decides to use force to end the siege of Faizabad Interchange by a religious group.

Police officials in Rawalpindi have revealed that out of the 33 reserves of extra police deployed in the city, 16 platoons were called in from the Punjab Constabulary, eight from Sargodha, seven from Mianwali and two from Attock.

“The extra police have been provided with anti-riot tools including a large quantity of tear gas shells. The police contingents will be deployed at three points: Sadiqabad, IJ Principal Road, and Faizabad to prevent the protesters from entering Rawalpindi,” officials added.

The twin cities have been under siege by a few hundred religious zealots who have been demanding the resignation of law minister Zahid Hamid. Tehreek-e-Labaik Ya Rasool Allah’s leader Peer Khadim Rizvi has so far refused to heed to government’s request to vacate Faizabad.

Roads in the twin cities have been jammed packed due to the closure of main highway connecting Islamabad and Rawalpindi. Last week, a child died when his ambulance could not reach the hospital in time due to the traffic jam.

Citizens have requested both the government and protestors to solve the deadlock amicably so that life returns to normal. Traders have also been suffering losses due to the closure of roads and have expressed hope in the peaceful solution of the crisis.

Facebook Ban is no solution: You can’t destroy a country because it has few criminals

The chastised hero of an ungrateful nation: The end of an era

Akcent hints at singing the next PSL anthem, fans get excited