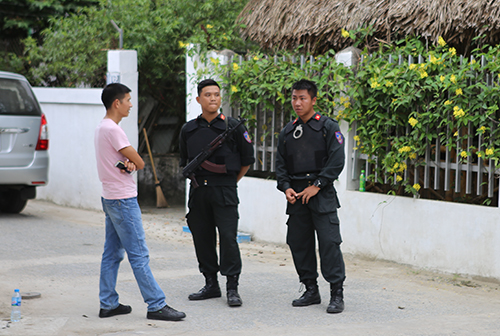 Police in central Vietnam have seized more than half a tonne of methamphetamine in one of the largest drug busts in recent years in the communist country where synthetic drug use is on the rise.

Four people were arrested after police stormed a house in central Nghe An province where they found 600 kilograms (1,300 pounds) of meth, some of it stuffed in speaker boxes.

The meth shipment was “about to be loaded onto trucks… for delivery”, according to a report from Cong An Nhan Dan, the official mouthpiece of the Ministry of Public Security, after the bust on Monday.

The one-party state is both a hub for drug use and also a popular thoroughfare for shipments of illicit narcotics.

Dozens of police swarmed a house where the drugs were being stored, occupied by an elderly couple believed to be related to one of the dealers, according to state-run Tuoi Tre newspaper.  Police said they were investigating the source of the meth and where it was to be shipped to.

The bust follows a weekend seizure of 30 kilograms of drugs in southern An Giang province, including about 18 kilograms of meth that was stored in packages for tea and vitamin supplements.

Synthetic narcotics manufactured in the lawless “Golden Triangle” region straddling Myanmar, Laos and Thailand often find their way into Vietnam, though homegrown labs have also been reported in recent years. The one-party state is both a hub for drug use and also a popular thoroughfare for shipments of illicit narcotics.

Police in central Vietnam have seized more than half a tonne of methamphetamine in one of the largest drug busts in recent years in the communist country.

Opium and heroin are the drugs of choice among older users, but youngsters are increasingly turning to party drugs such as ecstasy, meth and ketamine which have flooded the market. Last year seven young people died of suspected overdoses at an electronic music festival in Hanoi.

Vietnam boasts some of the world’s toughest drug laws, and anyone caught with more than 600 grams (21 ounces) of heroin or more than 2.5 kilograms of methamphetamine can face the death penalty.

Extension of the amnesty law: Syrian hopes of a ‘new’ life still alive