Pompeo in Saudi Arabia to discuss retaliation to Oil Attacks, after US blames Iran

Trump's administration is considering responses to the latest attack including a cyber attack or a physical strike on Iranian oil infrastructure or its Revolutionary Guards, NBC News reported 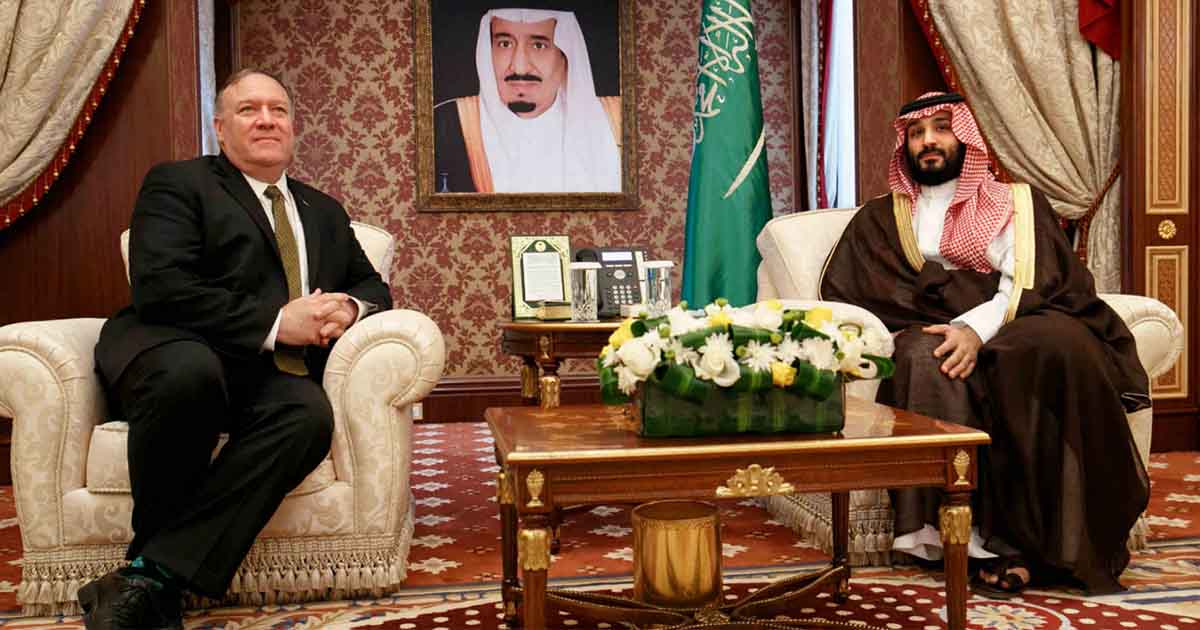 US Secretary of State Mike Pompeo departed for Saudi Arabia Tuesday to discuss possible retaliation after Washington said it had proof that attacks on Saudi oil installations originated in Iran.

Vice President Mike Pence announced that Pompeo was on his way to the kingdom to “discuss our response.” “As the president said, we don’t want war with anybody but the United States is prepared,” Pence said in a speech in Washington.

“We’re locked and loaded and we’re ready to defend our interests and allies in the region, make no mistake about it,” he said, echoing President Donald Trump’s words on Sunday.

Saudi Arabia oil supply was attacked. There is reason to believe that we know the culprit, are locked and loaded depending on verification, but are waiting to hear from the Kingdom as to who they believe was the cause of this attack, and under what terms we would proceed!— Donald J. Trump (@realDonaldTrump) September 15, 2019

A US official, speaking on condition of anonymity, said that the Trump administration has concluded that last weekend’s attack involved cruise missiles from Iran and that evidence would be presented at the UN General Assembly next week.

The apparent hardening of the US position came as Iran’s supreme leader ruled out negotiations with Washington “at any level.” This appeared to nix remaining hopes for a dramatic meeting between Trump and Iranian President Hassan Rouhani at the United Nations next week.

Speaking to reporters on Air Force One over California, Trump said he too had cooled on what had always seemed to be a diplomatic longshot. “I never rule anything out, but I prefer not meeting him,” Trump said.

Pompeo had also issued a harsh statement right after the Oil Attack.

We call on all nations to publicly and unequivocally condemn Iran’s attacks. The United States will work with our partners and allies to ensure that energy markets remain well supplied and Iran is held accountable for its aggression— Secretary Pompeo (@SecPompeo) September 14, 2019

Yemen’s Iranian-backed Huthi rebels claimed responsibility for Saturday’s oil installation attacks, which halved output from the petro-state, a close ally of Washington. But a senior US administration official cast doubt on that claim, saying that while the Huthis said they used 10 drones, one Saudi oil facility was hit “at least 17 times,” and another twice by “precision-guided munitions.”

Additionally, neither the type of drone “nor the cruise missiles employed in the attack can reach the facilities from Yemen. It’s not possible,” the official said. The Huthis are at war with Saudi-backed forces in Yemen, turning the impoverished nation into a proxy battlefield for bitter regional rivals Tehran and Riyadh.

Mike Pompeo departed for Saudi Arabia Tuesday to discuss possible retaliation after Washington said it had proof that attacks on Saudi oil installations originated in Iran.

The increasingly complex conflict dovetails with the Trump administration’s attempt to curb Iranian power through a “maximum pressure” campaign of crippling economic sanctions. Trump began that campaign after unilaterally pulling out of a 2015 international deal meant to reward Iran for allowing restrictions on its nuclear industry.

He says that Tehran is secretly cheating and trying to build nuclear weapons and must be stopped. Supreme leader Ayatollah Ali Khamenei said Washington’s real goal was to bring his country to its knees.

Read more: Locked and Loaded: Trump says US is ready to defend Saudis after oil attack

“The policy of ‘maximum pressure’ against the Iranian nation is worthless and all Islamic Republic of Iran officials unanimously believe there will be no negotiations with the US at any level,” he said in a televised address. Khamenei also said that as long as sanctions are in place, direct talks are impossible, including a meeting at the UN.

Whether the new stage of the long-running US-Iranian standoff leads to conflict is the big unknown. Saudi Arabia, which has bought huge quantities of US weaponry, is considered a strategic ally in the region, second to Israel, another bitter foe of Iran.

Trump began that campaign after unilaterally pulling out of a 2015 international deal meant to reward Iran for allowing restrictions on its nuclear industry.

Trump called off a retaliatory US missile attack on Iran in June after the Iranians shot down a spy drone. He said he did not want to kill what generals told him could be up to 150 people.

Trump’s administration is considering responses to the latest attack including a cyber attack or a physical strike on Iranian oil infrastructure or its Revolutionary Guards, NBC News reported, citing unnamed US officials.

Republican Lindsey Graham — a vital Trump ally in Congress — struck a belligerent tone Tuesday, charging that “such a sophisticated attack could not have occurred without Iran’s blessing and direct involvement.” “This is literally an act of war,” Graham said.

The strikes hit Abqaiq, the world’s largest oil processing facility, and the Khurais oil field in eastern Saudi Arabia. Oil prices receded more than five percent on Tuesday, reversing some of the previous day’s gains as analysts said they were expecting Saudi output to recover sooner than expected.

Energy specialists S&P Platt said around three million barrels per day of Saudi crude would remain offline for at least a month.

‘Pakistan is not the perpetrator of war but a victim of war against terror’, says Hamza Ali...