Pompeo vows ‘every last Iranian boot’ will be expelled from Syria 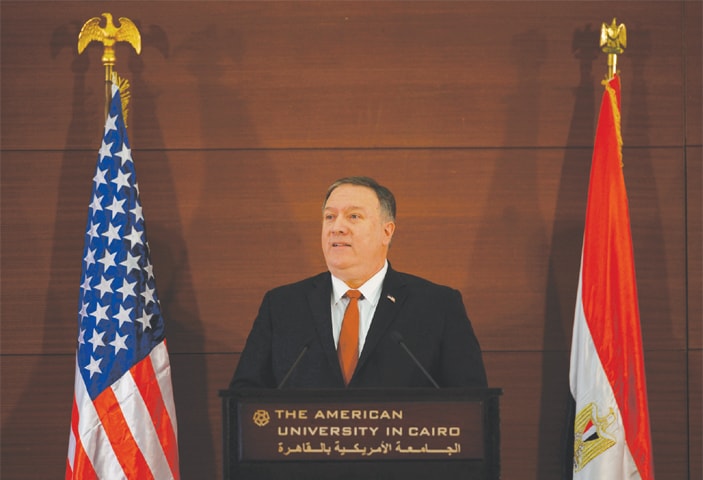 US Secretary of State Mike Pompeo vowed Thursday the United States and its allies would work diplomatically to expel all Iranian troops from Syria, urging Middle East nations to forge a common stand against Tehran. “It’s time for old rivalries to end, for the sake of the greater good of the region,” said Pompeo at a keynote address in Cairo.

America “will use diplomacy and work with our partners to expel every last Iranian boot” from Syria and bolster efforts “to bring peace and stability to the long-suffering Syrian people,” he added. Washington’s top diplomat was in Egypt on the latest leg of a whistle-stop regional tour aimed at reassuring US allies after President Donald Trump’s shock decision to withdraw 2,000 US troops from Syria.

United States and its allies would work diplomatically to expel all Iranian troops from Syria, urging Middle East nations to forge a common stand against Tehran.

In his speech at the American University in Cairo, Pompeo said the US was creating an anti-Iran front — the Middle East Strategic Alliance — bringing together Gulf countries as well as Egypt and Jordan. Pompeo said the US would ensure Israel has the military capacity to “defend itself against the Iranian regime’s aggressive adventurism.”

He stressed the troop pullout from Syria would go ahead, despite recent comments appearing to walk back on Trump’s decision, but said Washington would remain engaged. “We will withdraw our forces, our uniformed forces, from Syria and continue America’s crushing campaign,” Pompeo said at a press conference with his Egyptian counterpart Sameh Shukry.

In his speech at the American University in Cairo, Pompeo vowed a real “new beginning” in ties between the US and the Middle East, echoing former president Barack Obama’s landmark 2009 address to the Muslim world, also delivered from Cairo. Pompeo’s tour aims to urge US allies to continue to confront the “significant threats” posed by Iran and Islamic State group (IS) jihadists.

US allies after President Donald Trump’s shock decision to withdraw 2,000 US troops from Syria.

Multiple operations including American-backed assaults have ousted IS from most of the swathes of Syria and Iraq it captured in 2014. Pompeo said Obama had “grossly underestimated the tenacity and viciousness of radical Islamism”. But International Crisis Group chief Robert Malley, a Obama advisor on the Middle East, said hearing Pompeo’s speech was like “listening to someone from a parallel universe.”

It was as if the “war in Iraq…, US indifference to its allies’ human rights violations, or Washington’s own complicity in the humanitarian catastrophe in Yemen never occurred,” he said. “Back on planet earth,” Arabs will see Pompeo’s speech for what it is, Malley said: “a self-congratulatory, delusional depiction of the Trump administration’s Middle East policy.”

Read more: US military removes some equipment from Syria

Washington-based Human Rights First slammed the speech, saying it “doubled-down on blanket US support for the authoritarian regimes that have driven decades of instability in the Middle East.” Brian Dooley, the group’s senior advisor, said Pompeo failed to mention that Saudi Arabia’s war in Yemen “repeatedly violated international law” and brushed aside “how torture in jails is driving prisoners into the arms of ISIS.” As Pompeo arrived in Egypt, the State Department described the country as a “steadfast partner in the anti-terror fight, and a courageous voice in denouncing the radical Islamist ideology that fuels it”.

Pompeo will also visit Gulf countries including Bahrain, the United Arab Emirates, Qatar, Kuwait, Oman and Saudi Arabia. The tour comes amid rising concerns that US policy in the region has stagnated. A long-promised Trump plan for a peace deal between Israelis and Palestinians has so far failed to materialise.  Many of the Trump administration’s decisions have stoked confusion and angered regional allies.

“By most accounts, Trump’s Middle East policy has made a messy Middle East even messier,” Aaron David Miller, a former US diplomat and now an analyst at the Wilson Center, said on Twitter. He said Trump “makes new policy by tweet or phone call” and is “surrounded by risk-ready advisers who run cleanup, don’t respect deliberation and have objectives that aren’t clear or attainable”.

Pompeo’s tour aims to urge US allies to continue to confront the “significant threats” posed by Iran and Islamic State group (IS) jihadists.

One thorny issue is Washington’s dispute with its longtime ally and Syria’s neighbour, Turkey. The two are at loggerheads over the post-withdrawal fate of Syrian Kurdish forces, considered by Ankara as “terrorists”.

Read more: US begins withdrawing gear from Syria, but not troops

Turkish officials had a tense meeting this week with Trump’s national security adviser John Bolton in Ankara aimed at coordinating the pullout process after Bolton set conditions that appeared to postpone it indefinitely. The terms included total defeat of IS — still active in some parts of Syria — and ensuring that Kurdish fighters who fought alongside the Americans against the jihadists would be protected.

On Thursday, Turkey renewed its threat to launch an offensive against Kurdish forces. Turkish Foreign Minister Mevlut Cavusoglu told NTV television: “if the (pullout) is put off with ridiculous excuses like Turks are massacring Kurds, which do not reflect the reality, we will implement this decision.”