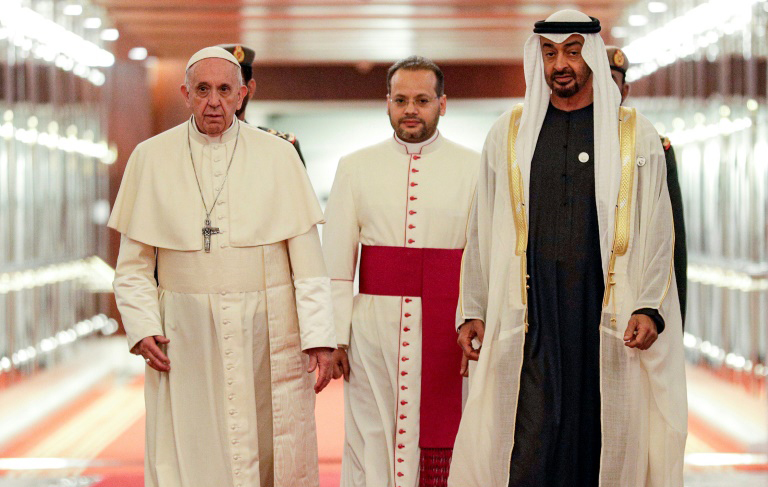 Pope Francis landed in the United Arab Emirates on Sunday for the first ever visit by a pontiff to the Arabian Peninsula — the birthplace of Islam. The pope touched down in Abu Dhabi for the 48-hour trip during which he will meet leading Muslim clerics and hold an open-air mass for some 135,000 Catholics.

He was greeted by Abu Dhabi Crown Prince Sheikh Mohammed bin Zayed and was warmly embraced by Sheikh Ahmed al-Tayeb, the imam of Cairo’s Al-Azhar, Sunni Islam’s prestigious seat of learning. The pontiff will take part in an interreligious conference on Monday with Sheikh Ahmed.

The UAE has however been criticised by rights groups for its involvement in a bloody Saudi-led military intervention in Yemen.

Hours before he flies back to Rome on Tuesday, he will lead mass in a stadium in Abu Dhabi — set to be the largest gathering ever in the UAE, according to local media. His visit comes with the UAE engaged in a long-running military campaign in Yemen and embroiled in a diplomatic spat with nearby Qatar.

Before heading to the Gulf, the pontiff urged warring parties in Yemen, where the UAE backs the government against Huthi rebels, to respect a truce agreement. “I appeal to all parties concerned and to the international community to allow the urgent respect of established accords to ensure the distribution of food,” he said.

“The population is exhausted by the lengthy conflict and a great many children are suffering from hunger, but cannot access food depots. “The cry of these children and their parents rises up to God.”

US Secretary of State Mike Pompeo hailed the pope’s arrival in the UAE as “an historic moment for religious freedom”. “The first Holy Mass by a pope in the Arabian Peninsula promotes peace and understanding between two of the world’s great religions,” Pompeo tweeted.

The pontiff will take part in an interreligious conference on Monday with Sheikh Ahmed.

Nearly one million Catholic migrants reside in the UAE, mostly hailing from the Philippines and India. Around 135,000 have secured precious tickets to Tuesday’s mass at Zayed Sports City Stadium. On Sunday morning, hundreds of Catholics queued in drizzling rain outside St. Joseph’s Cathedral in Abu Dhabi to get their passes.

“I think the pope coming really opens doors for conversations about tolerance that the whole world needs to hear,” said Collins Cochet Ryan, a 39-year-old expectant mother from the US. For Indian Doris D’Souza, who lives in Goa, Pope Francis’s trip to the UAE was not to be missed.

“Since I came to know about the pope’s visit to Abu Dhabi, we jumped (at) the  opportunity to be witness.” The UAE capital’s main streets and those leading to St. Joseph’s Cathedral — which the pope is set to visit on Tuesday — were lined with Vatican City flags and banners of the interreligious meeting.

Read more: Pope Francis’ visit to Egypt: an attempt to resolve differences between…

UAE minister of state for foreign affairs Anwar Gargash extended an official welcome to Pope Francis on Sunday. “It is a visit that carries great humanitarian value, and the UAE adds a new (chapter) in the history of fraternity and tolerance,” he tweeted.

Nearly one million Catholic migrants reside in the UAE, mostly hailing from the Philippines and India.

He took an apparent jab at Qatar, which hosts Islamist cleric Youssef al-Qardawi and is engaged in a bitter standoff with its Gulf rivals. Gargash pointed out the difference “between those hosting a cleric of violence and terrorism… and those who host the pope and the Al-Azhar sheikh for a dialogue of love and communication”.

The UAE, along with Saudi Arabia, Bahrain and Egypt, cut all ties with Doha in June 2017 over allegations it supports extremists. The UAE prides itself on its religious tolerance and cultural diversity.

It has eight Catholic churches. Oman, Kuwait and Yemen each have four. Qatar and Bahrain have one each, while ultra-conservative Sunni powerhouse Saudi Arabia bans all non-Muslim places of worship.

The UAE has however been criticised by rights groups for its involvement in a bloody Saudi-led military intervention in Yemen, where an estimated 10,000 people have been killed in four years of war. Millions of Yemenis face imminent starvation, according to the UN.

Rights groups have also slammed the Gulf state for upholding a 10-year prison term against activist Ahmed Mansoor on December 31 — two weeks after the UAE declared 2019 the “Year of Tolerance”.

“But the UAE has shown how sensitive it is to its image on the global stage, and Pope Francis should use his visit to press UAE leaders to meet their human rights obligations at home and abroad.”

It’s Australia vs India but not on cricket ground