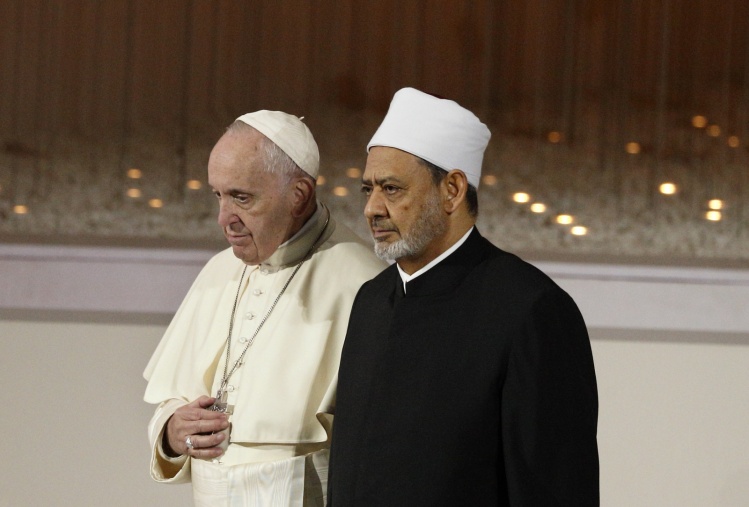 Billed as a bid to stimulate inter-faith dialogue, Pope Francis, on a visit to Egypt, is tiptoeing through a religious and geopolitical minefield.

Designed to improve the fragile position of Christians and other minorities in the Middle East, North Africa, and the larger Muslim world, the pope is walking a tightrope amid Saudi-inspired Sunni Muslim ultra-conservatism that fuels intolerance and sectarianism across the region, and a power struggle between Egyptian general-turned-president Abdul Fattah Al-Sisi and Al-Azhar, one of the world’s oldest and foremost seats of Islamic learning.

Addressing a peace conference at Al Azhar, the pope urged his audience to “say once more a firm and clear ‘No!’ to every form of violence, vengeance, and hatred carried out in the name of religion or in the name of God.”

In a boost of Orthodox Christian morale, Pope Francis paid homage to the scores of victims of the bombing earlier this month of two Coptic churches shortly after becoming the first head of the Vatican to set foot in Egypt in 17 years. The bombings were the latest jihadist attacks on religious minorities in the Middle East and North Africa that have persuaded Christians and others to flee their home countries, if not the region.

Read more: Aristotle’s God is not different from that of Islam or Christianity

The jihadist campaign is rooted in an intolerant, supremacist interpretation of Islam that traces its roots to the Arabian Peninsula long before Saudi Arabia was established as a state, offshoots of which have turned their violence as much on the kingdom as on others. It is further fuelled by increased Islamophobia abetted by the rise of anti-Muslim and anti-migration nationalism and populism across the globe.

It also feeds on autocratic leaders like Mr. Al-Sisi whose rule is based on brutal repression designed to mask their failure to deliver public services and goods or manage complex, politically risky transitions towards a post-oil era. These leaders have often abetted massive, decades-long Saudi funding of an ultra-conservative Sunni Muslim worldview that has embedded itself in Muslim communities across the globe, including Al Azhar.

Mr. Al-Sisi, often prone to hyperbole and self-aggrandizement, threatened the university’s scholars in 2015 that he would complain to God if they failed to act on his demand for reform.

Addressing a peace conference at Al Azhar, the pope urged his audience to “say once more a firm and clear ‘No!’ to every form of violence, vengeance, and hatred carried out in the name of religion or in the name of God.” Pope Francis issued his call as Al-Azhar was resisting efforts by Mr. Al-Sisi to persuade the institution to cut its ties to ultra-conservatism and reform its teachings.

In doing so, the pope was shining a spotlight on multiple complex battles for the soul of Islam as well as the survival of autocracy in the Middle East and North Africa. These battles include Saudi efforts to distance ultra-conservatism from its more militant, jihadist offshoots; resistance to reform by ultra-conservatives who no longer are wholly dependent on support of the kingdom; and strains in relations between Saudi Arabia and some of its closest Arab allies, including Egypt and the United Arab Emirates, that are fought in part over ultra-conservativism and political Islam.

Resistance to Mr. Al-Sisi’s calls for reform of Al-Azhar is rooted not only in Saudi-inspired ultra-conservatism but also an ingrained animosity towards government interference and the president’s high-handed approach. Mr. Al-Sisi, often prone to hyperbole and self-aggrandizement, threatened the university’s scholars in 2015 that he would complain to God if they failed to act on his demand for reform. “Allah Almighty be witness to your truth on Judgment Day concerning that which I’m talking about now,” Mr. Al-Sisi said.

“God made me a doctor to diagnose the problem, he made me like this so I could see and understand the true state of affairs. It’s a blessing from God.”

Mr. Al-Sisi’s campaign against Al-Azhar highlights the pitfalls of Saudi Arabia’s long-standing use of religious ultra-conservatism backed by its financial muscle as a soft power tool and the kingdom’s more recent efforts to shave off the rough edges of its ideology rooted in both religion and an austere Bedouin culture, and project it as open-minded, tolerant, and peace-loving.

Mr. Al-Sisi rose to power in a Saudi-backed military coup in 2013 that toppled Mohammed Morsi, a Muslim Brother and Egypt’s first and only democratically elected president. Mr. Al-Sisi recently traveled to the kingdom to patch up differences over Syria, Yemen, Saudi unhappiness with his inability to whip Egypt’s troubled economy into shape, and his attempted crackdown on ultra-conservatism that led the kingdom to temporarily curtail economic support for his regime.

Among the pope’s interlocutors in Egypt, was former Egyptian grand mufti Al-Goma, an advocate of a Saudi-propagated depoliticized form of Islam that pledges absolute obedience to the ruler, an opponent of popular sovereignty, and a symbol of the tension involved in adhering to both Saudi-inspired ultra-conservatism that serves the interests of the Saudi state, and being loyal to the government of his own country.

Al-Azhar scholars compete “frantically” for sabbaticals in the kingdom that could last anywhere from one to 20 years, paid substantially better, and raised a scholar’s status.

A prominent backer of Mr. Al-Sisi’s grab for power, Mr. Goma frequently espouses views that reflect Saudi-inspired ultra-conservatism. In an interview with MBC, a Saudi-owned media conglomerate, Mr. Goma recently asserted that women did not have the strength to become heart surgeons, serve in the military, or engage in sports likes soccer, bodybuilding, wrestling, and weightlifting.

Mr. Goma’s remarks came as Saudi Arabia’s ultra-conservative religious establishment was fighting a backbench battle against efforts by Deputy Crown Prince Mohammed Bin Salman to slightly loosen the kingdom’s austere social and moral codes as part of an effort to upgrade Saudi autocracy and take it into the 21st century as well as diversify and rationalize the economy.

Prince Mohammed’s plans laid out in his Vision 2030 plan involves a degree of greater inclusion of women in the workforce as well as greater sporting opportunities for women in a country that does not include physical education for girls in the curriculum of public schools, has no public sports facilities for women, and bans women from driving.

“When I asked El-Tayeb why Al-Azhar was not seeing changes and avoidance of dogma, he said: ‘my hands are tied.’”
– Mohammed ibn Abdul Wahhab

Pope Francis’ interlocutors in Cairo also included the imam of the Al-Azhar Grand Mosque, Ahmed El-Tayeb. A prominent Islamic legal scholar, who opposes ultra-conservatism and rejected a nomination for Saudi Arabia’s prestigious King Faisal International Prize, recalls Mr. El-Tayeb effusively thanking the kingdom during panels in recent years for its numerous donations to Al-Azhar. Al-Azhar scholars, the legal scholar said, compete “frantically” for sabbaticals in the kingdom that could last anywhere from one to 20 years, paid substantially better, and raised a scholar’s status.

“Many of my friends and family praise Abdul Wahab in their writing,” the scholar said referring to Mohammed ibn Abdul Wahhab, the 18th-century religious leader whose puritan interpretation of Islam became the basis for the power-sharing agreement between the kingdom’s ruling Al Saud family and its religious establishment. “They shrug their shoulders when I ask them privately if they are serious… When I asked El-Tayeb why Al-Azhar was not seeing changes and avoidance of dogma, he said: ‘my hands are tied.’”

Read more: Religion and Education Around the World

To illustrate Saudi inroads, the scholar recalled being present when several years ago Muhammad Sayyid Tantawy, a former grand mufti and predecessor of Mr. El-Tayeb as imam of the Al-Azhar mosque, was interviewed about Saudi funding. “What’s wrong with that?” the scholar recalls Mr. Tantawy as saying. Irritated by the question, he pulled a check for US$100,000 from a drawer and slapped it against his forehead. “Alhamdulillah (Praise be to God), they are our brothers,” the scholar quoted Mr. Tantawy, who was widely seen as a liberal reformer despite misogynist and anti-Semitic remarks attributed to him, as saying.

Mr. Al-Sisi with his brutal repression that threatens to enhance rather than limit ultra-conservatism.

In an illustration of the sometimes contradictory pressures emanating from ties to ultra-conservatism at a time that the Saudi-inspired worldview is on the defensive, Mr. El-Tayeb together with Mr. Goma last year attended a UAE and Russian-backed conference in the Chechen capital of Grozny that had Mr. Al-Sisi’s tacit support. The conference put Saudi Arabia on the spot with its condemnation of ultra-conservatism as deviant and exclusion from its definition of Sunni Muslim Islam.

The conference and Mr. Al-Sisi’s self-serving kick back at ultra-conservatism illustrates the tightrope the pope walks as he seeks to further inter-faith dialogue in a bid to counter the threat to Christians and other minorities in the Middle East, North Africa, and the Muslim world and position the church as a bastion in the fight against Islamophobia.

Read more: The “peaceful” Buddhists take up arms against Muslims

The pope’s problem in Egypt is manoeuvring between problematic partners: Mr. Al-Sisi with his brutal repression that threatens to enhance rather than limit ultra-conservatism and militancy or Islamic scholars torn between the influence of Saudi Arabia’s ultra-conservative religious establishment and their adherence to Saudi-backed notions of obedience to the ruler that dictates as well as complicates their relationship with an Egyptian leader who positions himself somewhere between them and God.

Previous articleBREAKING: Rao Tehseen to take Nawaz Govt. to court over dismissal in “Dawn Leaks”
Next articleMother of All Bombs: nothing more than a mere theatrical act by the US?

It’s not only Nawaz & Zardari but also India upset over...

News Desk - 26 July 2021
According to the unconfirmed and unofficial results by the Election Commission of the AJK, the PTI won 24 seats.

24 July 2021
Previous articleBREAKING: Rao Tehseen to take Nawaz Govt. to court over dismissal in “Dawn Leaks”
Next articleMother of All Bombs: nothing more than a mere theatrical act by the US?

Petro-Islam: The Genesis of Islamic Radicalism and Jihadism