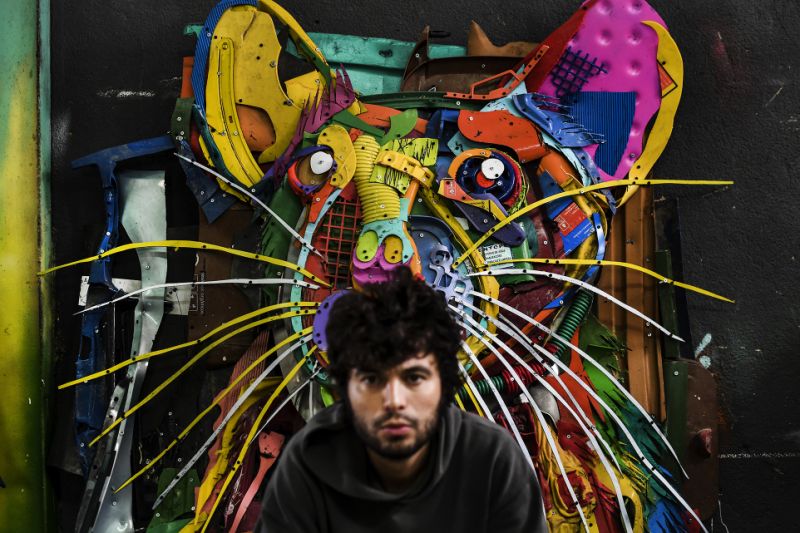 Broken crates and worn pipes pile up in the studio of Portuguese artist Bordalo II, who uses rubbish to create surprising animal sculptures to warn about the dangers of pollution. The bearded 31-year-old has decorated the Portuguese capital and other cities around the world with his colourful foxes, owls, monkeys and chameleons.

In Lisbon, one of his best-known works is a four-metre (13-foot) high raccoon assembled from old tyres, car bumpers and electronic components that gazes down on pedestrians in the riverside Belem district.

“Animals are the characters which the public can identify most easily with when I want to show the ravages of our society on nature,” said Artur Bordalo, who prefers the artistic name Bordalo II, a tribute to his late grandfather, painter Artur Real Bordalo.

In a sign of Bordalo II’s mainstream success as an artist, Lisbon’s’ prestigious Gulbenkian Foundation, one of Europe’s richest collections, is displaying one of his works in its garden until the end of the month.

He uses materials in his work that are harmful to animals to raise awareness, he said, in an interview with AFP at his Lisbon studio, as he hand drilled a paw out of plastic cut from a rubbish bin lid for a rodent sculpture. Bordalo II, who wore a grey hoodie and jogging pants that revealed his tattooed calves, collects the trash he uses to make his sculptures from Lisbon’s rubbish dumps and curbsides.

When he is not travelling abroad, he works on his sculptures in his tiny studio on the ground floor of a building in a working class northern Lisbon neighbourhood while listening to electronic music. “I have a busy schedule for the next few years. The problem is going to be finding time!” the artist said, smiling.

Read more: 10 signs you’re exceptionally smart though you don’t appear to be

Born in Lisbon in 1987, he took his first steps as an artist in the studio of his grandfather, a painter known for his watercolours of Lisbon who died last year. Bordalo II went on to study art at the University of Lisbon but he decided to focus on his passion — graffiti.

He said he got the idea to make sculptures from trash while doing graffiti. “One day I started to assemble objects I had put aside to create a stand to paint on and then I realised I could use these objects to create something aesthetically interesting, while giving them meaning,” he said.

“My productions depend a lot on wherever in the world I find myself,” said Bordalo II, whose works have decorated streets in Berlin, Paris, Las Vegas and Baku in Azerbaijan. The message he wishes to convey though is always the same.

In Lisbon, one of his best-known works is a four-metre (13-foot) high raccoon assembled from old tyres, car bumpers and electronic components that gazes down on pedestrians in the riverside Belem district.

“We must be interested above all in the state of the world and nature,” he said. Art in public spaces is an ideal way to change mentalities because “it has the power to mark spirits,” he added.

In a sign of Bordalo II’s mainstream success as an artist, Lisbon’s’ prestigious Gulbenkian Foundation, one of Europe’s richest collections, is displaying one of his works in its garden until the end of the month.

The statue of a bear and her cub “draws attention to the ecological damage we are leaving to future generations,” said the museum’s spokeswoman, Ines Rapazote. Bordalo II is part of a growing group of artists such as Vhils and Pantonio who have used Lisbon’s streets to display their works, thanks to municipal policies that favour street art.

“Lisbon is one of the first world capitals to have created a legal framework that allows artists to paint on walls,” said Pedro Farinha, of Estrela d’Alva Tours, which has since 2014 staged tours of the city’s street art. Bordalo II said Lisbon “understands that urban art is a plus for the city.” “Grey walls have nothing to tell,” he added.

Independent Observers arrive in Pakistan, as the nation gears up for Elections

Has Shehbaz Sharif filed a case in London’s court against Daily Mail?

‘Immediate’ release of Turkish philanthropist ‘Kavala’ demanded by US