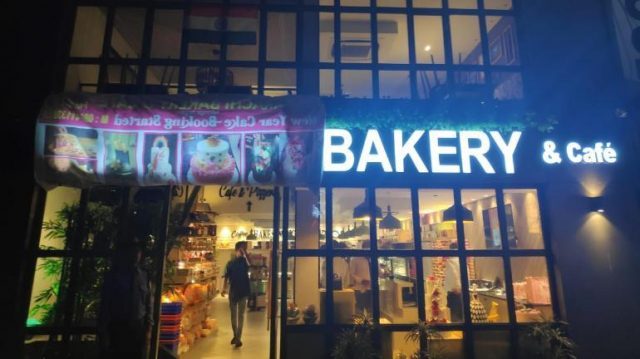 India’s popular bakery named, “Karachi Bakery” has been targeted by the furious mob who protested and harassed the staff of the bakery in Bengaluru, India to pull off the name ‘Karachi’ from the signboard.

The management of Karachi Bakery has been under the constant pressure from the public to show patriotism and remove the name ‘Karachi’. To satisfy the people and demonstrate their loyalty to their country, the management had hidden the word ‘Karachi’ with the poster in the signboard.

Few unidentified people arrived at Karachi Bakery in Bengaluru's Indiranagar and demanded that the name of the bakery be changed. The people running the bakery covered the word 'Karachi' and displayed the India flag to pacify and diffuse the situation. pic.twitter.com/zaqGAK6vvt

On Friday, at least nine people were arrested by the Police who harassed the bakery staff to pull off the name ‘Karachi’. The protestors hoisted the Indian flag at the bakery. They, however, ran when Police approached but were arrested later after being tracked down through CCTV footage. The Police has registered the case of rioting and criminal breach of trust against the arrested miscreants.

Karachi Bakery was founded by Khanchand Ramnani who migrated to India during I947 partition. Bakery’s first outlet was established in Bengaluru, Hyderabad, India and flourished into a big confectionary having nationwide franchises.

The criminals, however, dubbed their protest as a “patriotic” act in the wake of Pulwama terror attack. Seven of the suspects claimed to be “social workers” but failed to prove their ties with any social organization. The Police bashed the arrested suspects for moral policing and taking the law and order in their hand.

The manager of the bakery later talking to media stated, “The mob stayed for about half an hour. They demanded us to change the name. The men claimed to know people in the army. They thought we are from Pakistan. But we have been using this name for the last 53 years. The owners are Hindus; only the name is Karachi bakery. To satisfy them, we put up the Indian flag.”

The employee working in other outlets of the bakery stated to have been receiving threats to either change the name of the bakery or shut down their business since February 17.

Karachi Bakery was founded by Khanchand Ramnani who migrated to India during I947 partition. Bakery’s first outlet was established in Bengaluru, Hyderabad, India and flourished into a big confectionary having nationwide franchises.

Following the row, many sane voices from India have condemned the incident and dubbed it sheer extremism.

The jobless goons in Bengaluru who want Karachi bakery name changed have zero understanding of history: when you can't give a real 'mooh-tod' jawaab, we resort to these cheap gimmicks. All to keep 'nationalist' outrage factory working..

My hardcore vegetarian family (no onion, no garlic) always get cakes & cookies from #KarachiBakery.
The owners are orthodox Sindhis who chose India during partition.
Patriots need to channel their anger less dumbly.https://t.co/8PMAJGGzMS

As pictures of the incident circulated on social media, the people in Pakistan reminded the fellow Indians about a famous bakery named Bombay Bakery operational in Hyderabad for decades.

The incident was condemned from the people residing on this side of the border and hoped a better sense prevail in India. Many pleaded that such shared cultural symbols must not be eroded by ‘patriotism’ and ‘extremism’.

Previous articleHow Fleet Management Companies Can Continue To Be Efficient Through The Shelter In Place Orders
Next articleIndian aircraft violate LoC, forced back by timely response: DG ISPR

22 June 2021
Previous articleHow Fleet Management Companies Can Continue To Be Efficient Through The Shelter In Place Orders
Next articleIndian aircraft violate LoC, forced back by timely response: DG ISPR