With the sprouting disagreements between the elected Ashraf Ghani Govt and Opposition Leader Abdullah Abdullah on one hand and the refusal of Talebans to engage politically with the elected Govt on the other; the sustainability of the recently reached peace deal between US and Talebans is greatly put up into question. These disagreements coupled with role of the neighboring countries posses immense difficulty in sustaining peace in Afghanistan. 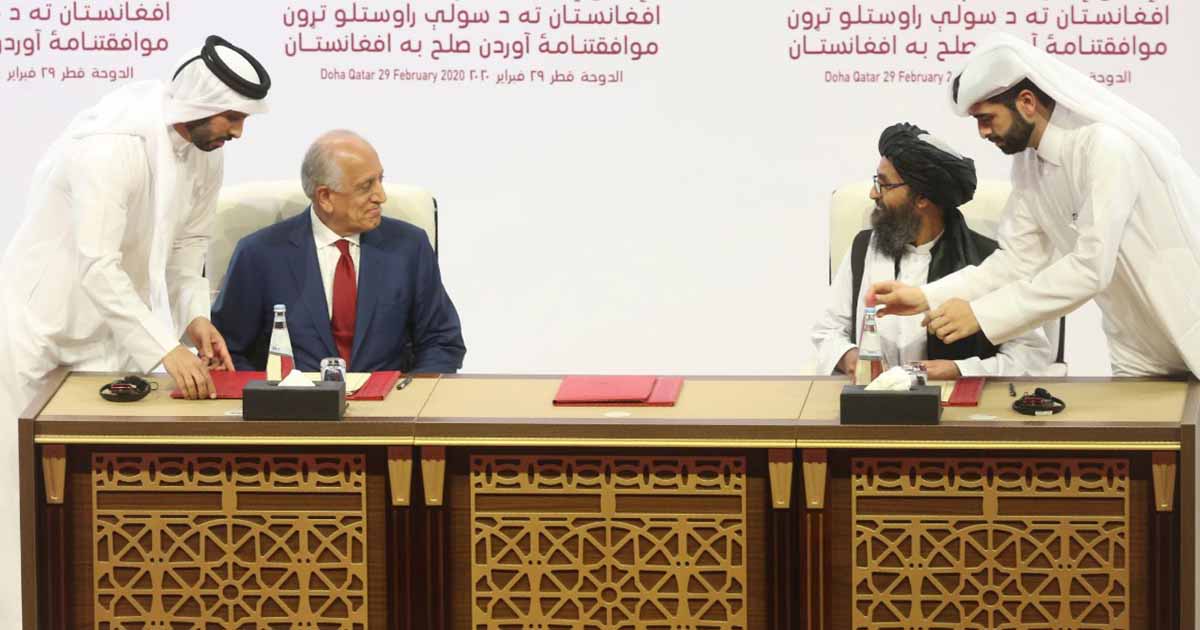 Taliban US Peace Agreement in Doha ,Qatar, is the most significant development in 18 years war between Taliban militant and United states in Afghanistan since  October 7, 2001 when US underwent (OEF-A) Operation Enduring freedom- against Al-Qaeda and Taliban.

Peace deal is neither failure of the Taliban nor United States, but victory of both; Taliban and United States. Taliban demand for withdrawal of foreign Forces from Afghan soil and in exchange United States has sought surety that Afghan land would not be used against US interests.

Taliban showed their interest in direct peace talk with US and they are not interested in talking to the Afghanistan government.

Afghanistan is facing corruption as a major issue. Despite of United States involvement still there is still corruption a big threat to society

Now the Question aroused that who and how will ensure the reconciliation and political settlement process in Afghanistan? Afghanistan has faced certain domestic and international challenges to the peace process.

Opposition leader Abdullah Abdullah also declared his own victory and blamed Election commission for favoritism. He called his supporters to form their own government in Kabul.

Hence, a struggle has continued between Ashraf Ghani and opposition leader Abdullah Abdullah to control the government. This development of political crisis will be challenge for the Afghan peace process and it can affect the peace process.

Afghanistan is facing corruption as a major issue. Despite of United States involvement still there is still corruption a big threat to society.

48 % Afghani are below the line of poverty, 35% youth are unemployed, 91% Afghan children are exposed to abuses, inequality with women, kidnapping by warlords for financial gain and so many others

Transparency International current reports have shown that Afghanistan is the second most corrupt country of the world. Taliban during their ruling period in 2000 has eradicated opium production.

Now more than 80 % world opium is produced in Afghanistan despite of $ 10 billion investment by the United States to counter opium production in Afghanistan.

48 % Afghani are below the line of poverty, 35% youth are unemployed, 91% Afghan children are exposed to abuses, inequality with women, kidnapping by warlords for financial gain and so many others. Due to these practices Taliban popularity is growing in Afghanistan.

The role of neighboring regional powers China, Pakistan, India and Iran cannot be ignored. They will try to influence Post Agreement talks between the Taliban’s and others Afghans groups. By supporting or opposing their favorite groups.

Awkwardly Afghanistan is landlocked and has limited resources, therefore as a result Afghanistan depends on their neighbor’s for communication, trade and commerce with the external world.

The Neighbors’ states have always strategic interests in Afghanistan. Moreover, they interested to gain influence in Kabul.

Pakistan, India, Iran and China have their own strategic interest in Afghanistan. Pakistan and India pursue its rivalry on the Land of Afghanistan territory since 1947.

In the previous Pakistan supported Taliban while India supported Northern Alliance for their interest in Afghan Politics.

The blame game is ongoing between Pakistan and India over Afghanistan. India opposed peace talks with Taliban in past.After 9/11 China refused to participate in direct military operation in Afghanistan

Presently, India pursues its interest in development of Afghan economy and infrastructure to establish itself as a regional power.

Thus, the blame game is ongoing between Pakistan and India over Afghanistan. India opposed peace talks with Taliban in past.

After 9/11 China refused to participate in direct military operation in Afghanistan. China role in Afghanistan was passive for many years. In 2006 China signed a treaty of Friendship, cooperation and good neighborly relation with the Kabul government.

Read more: Why is Russia so invested in the Afghan peace process?

Due to proximity to China, Afghanistan has direct influence on china security. The East Turkestan Islamic movement through Afghan border wakhan corridor into chines province Uyghurs. China one belt one road project and CPEC connectivity cannot materialize without peace and stability in Afghanistan.

Currently, China is the biggest foreign investor in Afghanistan. Moreover, China is interested to play their role in Afghanistan affairs because of their own strategic interest.

Iran has their own strategic interest in Afghanistan, Iran wants such type of Government in Kabul who favors the Iranian interest and it is also observed that Iran interest to minimize the Pashtuns influence in Afghanistan Politics.

It is the need of hour to overcome domestic and international challenges; faced to Taliban US peace deal in order to bring fruitful results of the deal.

The Neighbors and regional powers should assure that “Afghan owned Afghan led” peace talks will be fruitful because only Afghan have right to decide their own future.

Any negative response can devalue the whole peace process. Probably these situations will push Afghanistan into another Civil war.

China’s growing power in Central Asia & Middle East: Challenge for the US