The United States has the highest rate of mass shootings in the world. Responsible for far more killings annually than Islamic terrorists, “regular” Americans have been locked in a cycle of deadly shootings for decades amidst a heated gun control debate. 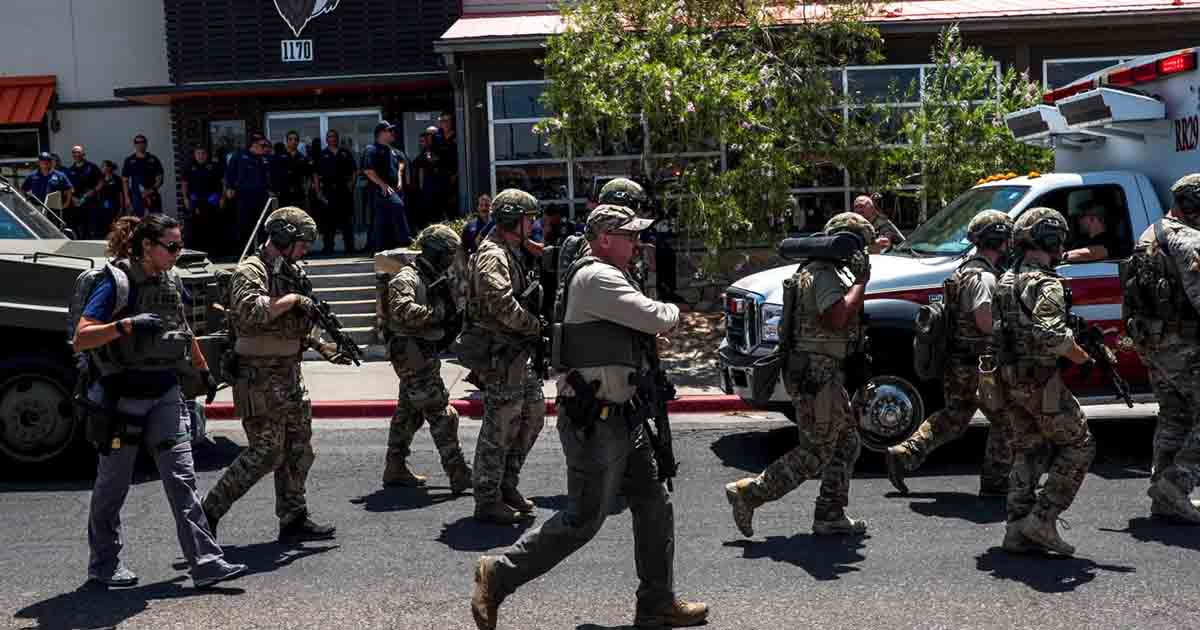 Mass-shootings are one of the biggest problems that the US faces in terms of crime and it is a notoriously hard issue to deal with. Democrats and Republicans just cannot seem to come to terms with each other over how to contain this menace. The two shootings in one day are just the latest iteration of this increasingly common menace. In one instance, an attack on a Walmart store in El Paso, Texas, left 20 dead. In the second shooting, nine died in a shooting in Dayton, Ohio.

President Trump was quick to express his condolences for both shootings and commit to coming together with Democrats for some sort of gun control, most likely focused around background checks.

After the shooting in El Paso, Texas Governor Greg Abbott commented that the gun assault is suspected to be a hate crime, and police revealed a “manifesto” they attributed to the suspect, 21-year-old Patrick Crusius, as evidence that the carnage was racially motivated.

Online message boards like 4Chan and Reddit are favorites for mass shooters, and the police cited a 4-page document that the shooter had uploaded earlier and described his actions as “a response to the Hispanic invasion of Texas”.

In Dayton, Ohio, 24-year-old Connor Betts opened fire in a popular nightlife district during the early hours of Sunday morning. Camera footage shows scores of scared partygoers running through the doorway of the Ned Peppers nightclub. The shooter can be seen running into the venue but being struck down by police gunfire as he almost crashes the threshold. Had he made it inside, this massacre would have been far worse. The gunman claimed that his own sister was amongst those he had killed. The motive for the crime, however, still remains unclear.

The US Gun-control Debate Sparked Again

The right to bear arms is a constitutional tenet of fundamental importance for a large majority of the Republican voters who voted President Trump into office. It is commonly justified through the 2nd amendment which makes a provision for civilians to bear arms in caution of government tyranny so that they have some substantial means to protect themselves. Those who agree with this interpretation tend to support the right to own and use most types of arms, including bigger guns like the controversial AR-15 rifle which is the weapon of choice for a vast number of mass shooters. These individuals also typically are in favor of “open-carry” laws and minimal background checks. However, President Trump has come out in clear favor of stricter background checks after these two shootings.

On the other hand, a large number of Democrats disagree with this interpretation, claiming that the 2nd amendment rights only apply to the creation of armed militias in times of need rather than regular civilians carrying arms. While some support the complete removal of guns from civilian hands in the US, most proponents of stricter gun laws support stricter background checks, bans on automatic weapons and a restriction on certain modifications and types of ammunition. They argue that restrictions such as stricter background checks will ensure that the mentally ill and the violent do not get a hold of guns, and that even if they do, their damage will be limited by the fact that they only have access to handguns and not automatic rifles. They see this as a panacea to mass shootings and think this will put a stop to them once and for all.

Using the hashtag #GunControlNow, people are calling on the US government to enact gun control legislation following a deadly mass shooting in El Paso, Texas.https://t.co/3tdFBZnbCY

Republicans, including President Trump, think of this as a lazy solution that does not target the source of the problem. While most republicans compromise on background checks to some extent, they maintain that “guns don’t kill people, people kill people” and that the mainspring for these vicious shootings is the mental health and extreme anomy of disenfranchised individuals in modern America. This valid point is often manipulated to feed into the narratives of white supremacists in the rust belt and even “Incels”, which discredits the Republican view which actually has a strong element of truth to it.

Read more: Amid plague of US mass shootings, ‘heroes’ emerge

In an era of political divisiveness, President Trump has fortunately called for Democrats and Republicans to come together to legislate on the issue. Countries like Australia and Norway put extensive gun control legislation into place after both countries experienced mass shooting hate crimes and saw their mass shooting rate plummet. Hopefully a similar benefit will be accrued in the US as a result of these tragedies.

Is there a Muslim-Buddhist conflict brewing in South East Asia?

The only solution to america’s healthcare woes