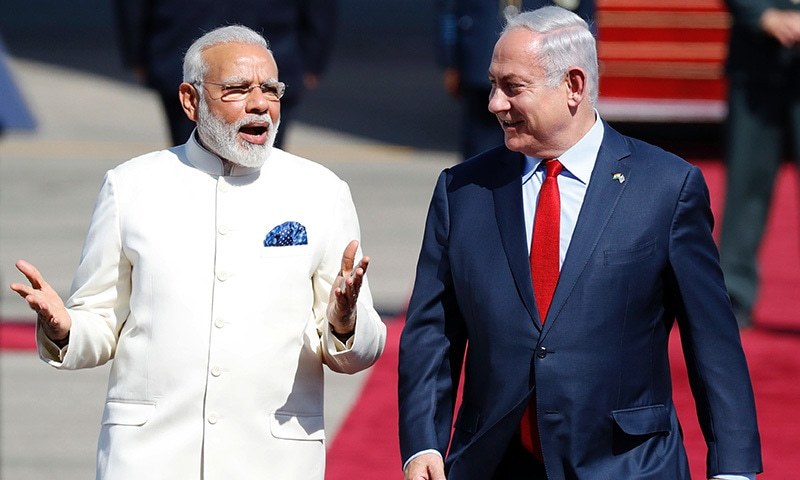 Narendra Modi has become the first Indian Prime Minister to visit Israel, arriving in Tel Aviv on Tuesday as part of a three-day visit to mark 25 years of diplomatic relations between the two nations.

Commenting on social media ahead of his departure, Modi said he was looking forward to holding extensive talks with Israeli Prime Minister Benjamin Netanyahu, whom he called “my friend, who shares a commitment for vibrant India-Israel ties.”

“From boosting economic ties to furthering people-to-people interactions, my Israel visit has a wide range of programs,” added Modi.

Am confident that the strength of India-Israel links, old & new, will hold us in good stead as we forge a partnership for the 21st century.
— Narendra Modi (@narendramodi) July 5, 2017

The landmark visit includes meetings with industry leaders and members of the Indian community as well as Moshe Holtzberg, a boy whose parents were killed in the 2008 Mumbai terrorist attacks.

The trip follows Modi’s meeting with US President Donald Trump in Washington on June 27.

In the past, however, the relationship has always been a balancing act given India’s sizeable Muslim population and the country’s dependence on oil imports from Arab countries and Iran.

Mr. Netanyahu has described Mr. Modi’s visit as “historic”, saying it would “deepen co-operation in a wide range of fields – security, agriculture, water, energy – basically in almost every field Israel is involved in”.

We are confident that 25 years from now, Indians and Israelis will look back on this visit as the first of many historical milestones (1/2)
— PMO India (@PMOIndia) July 4, 2017

Defense ties between India and Israel

Israel has in recent years become an important defense supplier for India. The two countries signed an air and missile defense deal worth almost $2 billion in April, in what Israel termed the “largest defense contract deal” in its history.

For years, Israel and India have been working closely together on counter-terrorism and defense issues and India has been a regular customer of arms from the Jewish state.

Working to modernize its military to counter China and Pakistan, India is now Israel’s biggest arms market, thought to be worth about $1bn (£770m) per year, according to Reuter’s news agency.

Economic relations between India and Israel have flourished since the establishment of formal diplomatic ties in 1992.

Bilateral trade at the time was worth $200 million and mainly consisted of diamonds. By 2016, that figure had skyrocketed to $4.16 billion, excluding defense expenditure.

In 2016, India accounted for 3.3% of Israel’s trade, with imports and exports including agriculture, textiles, machinery, and chemical and mineral products.

Under a program titled “Make in India,” Modi has been looking for foreign companies to set up production in India. Modi’s trip, which includes scheduled meetings with Israeli CEOs, is likely to be viewed as an opportunity to encourage Israeli businesses — ranging from diamond merchants to tech firms — to sell their wares in India.

The Prime Ministers of India and Israel also share an ideological worldview. As one Indian writer put it, Indian nationalists “not only envisage India following Israel’s apartheid model to deal with the minorities at home, but also always dream of turning India into an aggressive state like Israel”.

India over the decades strived to maintain neutrality on major international issues. It allowed India to navigate the complexities of international politics tactfully without compromising Indian national interests.

However, under PM Modi, this is set to change. India seems to have firmly placed itself in the camp of USA against the rising China and resurgent Russia. The recent visits by Indian premier to USA and Israel signaled this shift in Indian foreign policy.

Read more: The 4th generation war: Who is running away with the show?

The recent escalation of tensions between China and India comes at a time when PM Modi was in Washington. India which is unhappy with the CPEC project and has publically voiced its reservations on the project seems to be willing to adopt an increasingly aggressive stance towards China on border disputes.

Indo-Israeli ties will be seen with suspicion in Tehran which is a close Indian ally and refuses to recognize Israel. Whether India can play a role to defuse tensions between Israel and Iran is yet to be seen.

International politics is becoming increasingly complex and realignments are taking place. India has chosen its side. The Russo-Chinese reaction to it will be clear soon.

Another UK Election because of Brexit?

Pakistani Taxi driver & Indian girl: Act of honesty that won everyone over