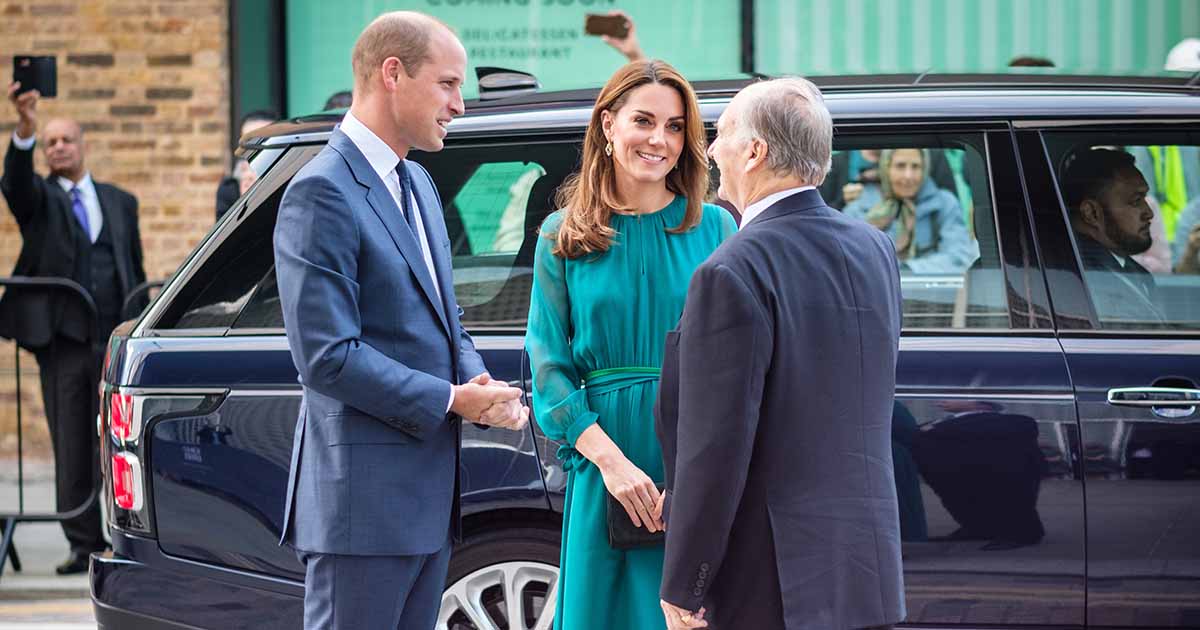 Kate Middleton attended a special event at the Aga Khan Centre in London today — and her beautiful earrings are a special nod to Pakistan, where she'll be visiting soon! pic.twitter.com/cKLbssdRh4— InStyle (@InStyle) October 2, 2019

Prince Aga Khan received the royal couple at the entrance of venues, where they exchanged greeting, he then escorted the couple into the venue.

At the end of the event, the Aga Khan, as well as Pakistan’s High Commissioner to the UK Nafees Zakaria, accompanied the couple.

At the Aga Khan Centre The Duke and Duchess of Cambridge met a range of people from Pakistan, including DJ and Producer @NaughtyBoyMusic, tabla virtuoso @tablashahbaz, flute maestro Muhammad Noman and @Seriouslive's Maha Malik 🇵🇰🇬🇧 pic.twitter.com/4KKGpY4XYQ

The gorgeous Kate Middleton donned a green dress, with earrings by a Pakistani clothing and accessories designer Zeen. The Aga Khan center has restored the unique collection of gardens, courtyards, and terraces, which provides an insight into the diversity and influence of Islamic landscape design around the world and through history.

Mahmood Khan, the Chairman of Aga Khan Development Network, described it as a fabulous ‘opportunity for royal highnesses to visit the Aga Khan Centre.’ Adding, “This building promotes the notions of pluralism and also represents our network which does a lot of work in the developing world.”

“We have a special relationship with Pakistan, but because of their royal highnesses’ upcoming visit there, we decided to invite them here so they could meet the Pakistani diaspora and people from different walks of life-based here in the UK,” he said, adding that the guests included people from Pakistan who had made their homes here and excelled. The couple met with Pakistani community leaders, chefs, musicians, artists and people involved in the UK and Pakistan’s business relationship.

A notable dignitary of the Pakistani community businessman Aneel Musarrat was also spotted at the event. British-Pakistani chef Saliha Mehmood Ahmed who won the Master Chef was entrusted with the opportunity to make a Pakistani themed lunch menu.

“It introduces them [Kate and William] to Pakistan. It allows them to talk a little bit to people from there and to get a flavor of where they are going.”

The Duke and Duchess of Cambridge met today with Aga Khan IV for a special event at the Aga Khan Centre ahead of their official visit to Pakistan from 14-18 October 2019.#duchessofcambridge #princewilliam #duchesscatherine #duchesskate #katemiddleton #catherinemiddleton pic.twitter.com/bS7F8HCOS2— europeroyals (@europeroyals_ig) October 2, 2019

Organizers of the event asserted that the event was organized to acquaint the royal couple with the culture, heritage, and traditions of Pakistan ahead of their visit to the country from Oct 14-18.

Later, Kensington Palace also shared the picture of the royal couple mingling with other Pakistani guests at the event.

Sadiq Khan declares he is a feminist

Shoaib Akhtar wants Salman Khan to play him in a biopic