Amid Pakistan’s economic slump Suzuki has decided to discontinue one of its most used and affordable vehicles from the market, providing an alternative with its newest budget-friendly ‘Prince Pearl’.

Suzuki’s decision to discontinue Mehran has greatly affected the automotive buying power of the lower-income and middle-class individuals, as the cheapest car from Pakistan’s leading automotive companies now costs more than Rs.1.5 million.

This led to a widespread demand in Pakistan’s auto industry for an alternative to Suzuki Mehran, which continues to have a dominant presence on roads across the country. United Bravo emerged as the first car that truly had the potential to emerge as a budget-friendly ride, however, it failed to satisfy consumers in terms of quality. The same can be said for the recently launched Suzuki Alto, as its quality has failed to substantiate the price for which it is being sold in the markets.

Prince’s Pearl REX7 Hatchback appears to be the newest contender for budget-conscious auto enthusiasts, and this 800cc car is the product of a joint venture between China’s DFSK and Pakistan’s Regal Automobiles.

Authorized dealers are pre-booking Prince Pearl for Rs.0.9 million to Rs.1 million, which is around 9 to 10 lac rupees. However, there have no reports that disclose the actual price of the vehicle at this point

Ever since its emergence, Prince Pearl has given a tough competition to United Bravo with one dominating difference: Prince Pearl offers a four-forward ride while United Bravo is a five-forward drive. Other than that, the Pearl appears to be the best option to replace the position garnered by Suzuki Mehran, as long as the Prince brand name succeeds in upholding its quality, a factor that United appears to have neglected in its Bravo.

Given the lack of affordable small hatchbacks, Prince Pearl has garnered a powerful surge of demand as it offers both, superior quality and a contemporary design despite the cost-efficient price tag.

Presently, there are 13 3s dealerships (Sales, Service & Spare Parts) across Pakistan from where you can make a pre-booking for Prince Pearl. Media reports reveal that authorized dealers are pre-booking Prince Pearl for Rs.0.9 million to Rs.1 million, which is around 9 to 10 lac rupees. However, there have no reports that disclose the actual price of the vehicle at this point.

Authorized dealers have informed all potential buyers that the actual price tag will lie within the range of 9 to 10 lac rupees, which has been disclosed to the interested customers.

Prince Pearl is presently being pre-booked on a first-come, first-service basis. The cars that have been booked so far are expected to be delivered in the first week of November; however, there can be further delays depending on when the pre-booking was made.

The pre-booking for Prince Pearl is due to the end a week before the automotive company will begin distributing the vehicles.

Listed below are the details of all 13 dealerships from where you can pre-book your Prince Pearl: 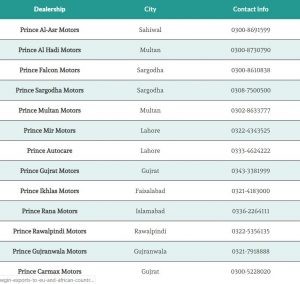 ‘Feels terrible’: Iran a year after US sanctions reimposed

February 20, 2020
Kumar Sangakkara, the skipper of Marylebone Cricketing Club(MCC) and a former Sri Lankan player, says the team is overwhelmed with the amount of love...

Umar Akmal seems not to care about suspension: Tweets Hilariously

Why would each PSL 5 match cost 23 billion loss to traders?

US alleges Iran of supplying arms to Huthis