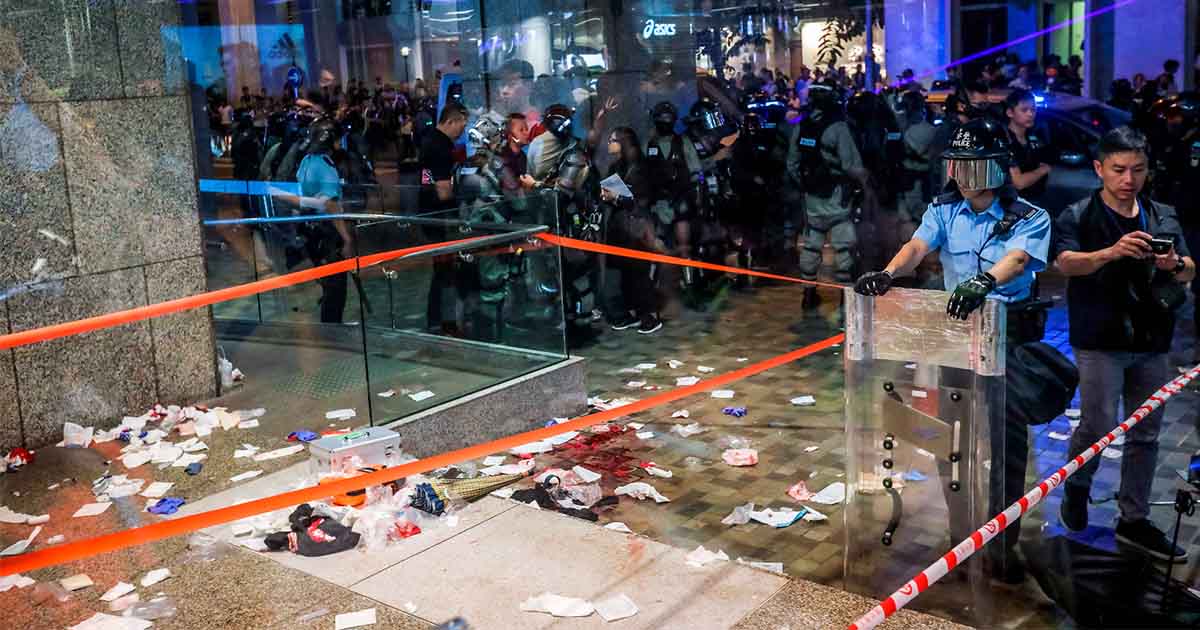 A firebrand pro-Beijing politician in Hong Kong was wounded in a knife attack on Wednesday, the latest tit-for-tat political violence to break out in a city engulfed by seething pro-democracy protests.

The stabbing came as the city’s unpopular leader Carrie Lam said her resolve to crack down on the protesters had been bolstered by a recent meeting with Chinese President Xi Jinping.

The international finance hub has been convulsed by five months of huge and increasingly violent protests calling for greater democratic freedoms and police accountability. With Beijing and Lam refusing to offer a political solution to the protesters’ grievances, violence has spiralled on both sides of the ideological divide.

Ho, 57, was conscious when he got into the ambulance. His bloodstained white shirt and wound dressings could be seen on the ground in the aftermath of the attack

In the latest incident a man holding a bouquet approached pro-Beijing lawmaker Junius Ho on Wednesday morning as the politician was campaigning in his constituency of Tuen Mun, a town on the outskirts of Hong Kong near the border with China.

Footage posted online showed the man handing Ho the flowers and asking for a picture. He then pulled a knife from his bag before striking his victim in the chest. Police said three people were wounded in the incident, including the attacker, who was subdued by Ho’s aides as he shouted in Cantonese: “Junius Ho, you scum!”

A police source, who declined to be named, told AFP that Ho received a stab wound to the left side of his chest and the attacker was arrested. Ho, 57, was conscious when he got into the ambulance. His bloodstained white shirt and wound dressings could be seen on the ground in the aftermath of the attack.

The stabbing came as Lam wrapped up a series of talks in mainland China with top Communist Party officials, including President Xi who threw his support behind the beleaguered leader when they met on Sunday, according to state media.

“President Xi’s trust and support to me and the Hong Kong government has strengthened our resolve to stop the violence and curb the chaos,” she said on Tuesday as she met in Beijing with Vice Premier Han Zheng.

China has run the city under a special “one country, two systems” model, allowing Hong Kong liberties not seen on the mainland, since its handover from the British in 1997. But public anger has been building for years over fears that Beijing has begun eroding those freedoms, especially since Xi came to power.

Footage posted online showed the man handing Ho the flowers and asking for a picture. He then pulled a knife from his bag before striking his victim in the chest.

Protesters have issued a list of demands, including universal suffrage and an investigation into abuses by police. Beijing has shown no willingness to meet demonstrators’ demands and recently signalled it plans to tighten its control over Hong Kong following a four-day meeting of party leaders.

Protesters show no sign of leaving the streets with 22 consecutive weekends of unrest while fights have broken out with growing frequency. Beijing supporters have attacked opponents throughout the summer, often in targeted assaults against prominent government critics and opposition politicians.

Eight pro-democracy figures have been attacked, including protest organiser Jimmy Sham who was hospitalised last month by men wielding hammers. On Sunday, a man with a knife attacked democracy protesters including a local politician who had part of his ear bitten off.

But the violence is far from one-sided. Crowds of pro-democracy protesters have routinely beaten their ideological opponents, usually in spontaneous mob violence during rallies, including a man on Saturday who was pummelled unconscious and stripped. Junius Ho has become one of the most loathed establishment figures among democracy protesters.

He has long been one of the most stridently pro-Beijing politicians in the city. But he shot to notoriety on 21 July after he was filmed shaking hands with a group of men in the town of Yuen Long who went on to beat protesters with sticks and poles, hospitalising 40 people.

He has delivered multiple speeches supporting Hong Kong’s police force and echoing Beijing’s condemnations of protesters, often using incendiary language. Last month he accused a prominent opposition lawmaker of “eating foreign sausage” because she is married to a British journalist.

After the Yuen Long attack, Ho’s office was ransacked by protesters and the graves of his parents were also vandalised.