Pakistan’s ambitious and visionary Project Azm includes the design and development of multiple innovative aviation projects, including the development of the fifth-generation fighter aircraft (FGFA), unmanned aerial vehicle (UAV), and other projects. 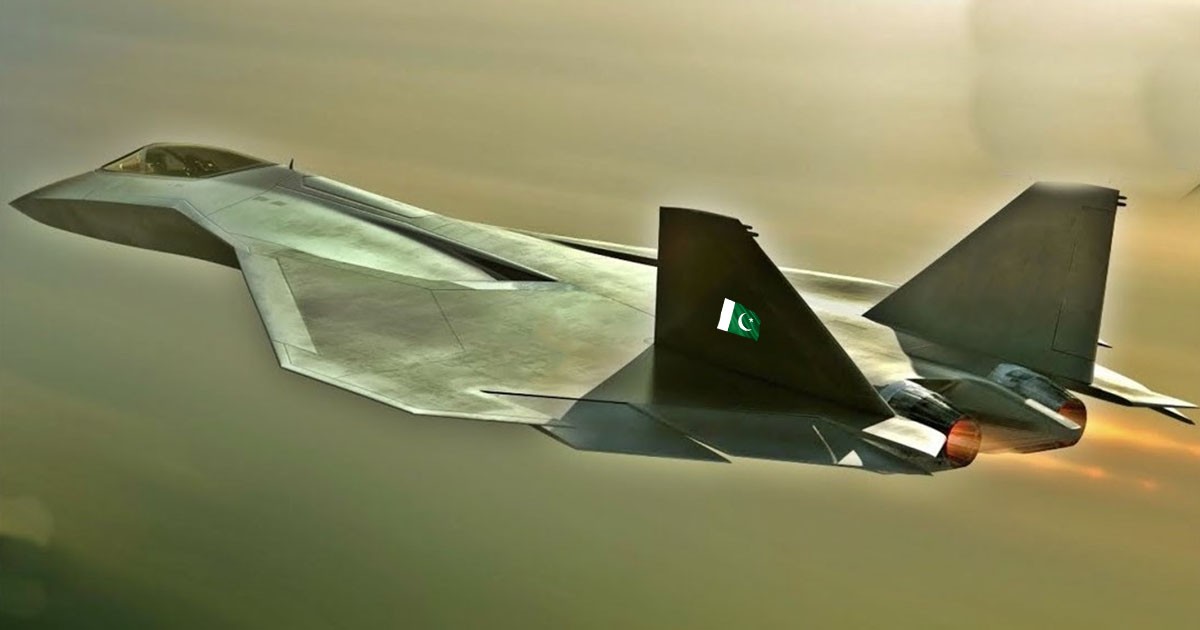 Pakistan Air Force showcased the conceptual design of its future stealth aircraft on the tail of the PAF C-130 at the Royal International Air Tattoo (RIAT) 2019.

As per the yearbook of the Pakistan Ministry of Defence Production (MoDP) for the year 2017-2018, the Aviation Research, Innovation and Development (AvRID) Secretariat has finalized the first of the four conceptual design stage cycles for the development of the Pakistan Air Force’s Fifth-Generation Fighter Aircraft (FGFA) program.

One of the Pakistan Air Force (PAF's) C-130B, participating in RIAT 2019 Tail Art displays PAC's (possible) concept/design for the FGFA under project "AZM". A Dual Engine 5th Generation Aircraft concept/design of Canard Delta can be seen.

The Fifth-Generation Fighter Aircraft (FGFA) is the highlight of the much-anticipated Project Azm, which outlines the PAF’s ambition for developing a state of the art aviation industrial base within the country. This aviation industrial complex will support the defense capabilities of the country, alongside fulfilling civilian and commercial aviation needs.

The Pakistan Air Force is here with this special scheme Herc from No. 6 sqn. Fourth year running for the PAF at the show.#riat #AirTattoo #RIAT2019 pic.twitter.com/mOxgynajJn

Project Azm was formally initiated by the PAF back in July 2017, and its agenda is to develop an FGFA, a medium-altitude, and long-endurance (MALE), new munitions, unmanned aerial vehicle (UAV), and multiple other projects.

Upon announcing the initiation of Project Azm, the then Chief of Air Staff (CAS) Air Chief Marshal (ACM) Sohail Aman had informed that the design phase of the Male Unmanned Aerial Vehicle (UAV) has reached its “final stages”.

The previous Chief of Air Staff (CAS) of the Pakistan Air Force (PAF), retired Air Chief Marshal (ACM) Sohail Aman had reportedly stated at the Islamabad Chamber of Commerce that the PAF had completed the design of Project Azm, its next-generation fighter. https://t.co/2hJrTOiYVb

According to the MoDP’s 2017-2018 yearbook, the scheduled deadline for the first flight of the MALE UAV was June 2019. The yearbooks of the MoDP are intended to reveal projects that are completed during a period of 12-18 months before the publication, which indicates that the MALE UAV has either flown or has been delayed, while the FGFA is well into the design phase of the project.

A recently conducted interview with the Pakistan Air Force Chief of Air Staff (CAS), Air Chief Marshal Mujahid Anwar Khan revealed that he does not expect the 5th generation fighter aircraft to make its maiden flight for “another decade”.

The Chief of Air Staff further added that the current Air Staff Requirements (ASR) for the 5th generation fighter jet, which include “twin-engine single-seater, boasting the likes of super-cruise and laser weapons (directed energy weapons).”

The FGFA is expected to be designed as a medium-to-heavyweight, high-performance fighter aircraft with a clean-sheet jet. The new design configuration reveals that the PAF intends to design a fighter aircraft that is equipped to carry heavier payloads and boosts a greater range than the JF-17.

If my calculations are correct, the aircraft we'll see being developed under Project Azm 2030 will be a clean sheet design, built around a SINGLE advanced derivative of the WS-15 class engine. It'll have low observable characteristics and PAF defined specifications.

Analysts believe that the PAF intends to design a platform that is optimized for offensive counter-air (OCA), maritime, and deep-strike platforms, making it next-in line of the F-16A/B Block 15s and the Mirage III/5.

Defence analyst Shahid Raza observed, “If my calculations are correct, the aircraft we’ll see being developed under Project Azm 2030 will be a clean sheet design, built around a SINGLE advanced derivative of the WS-15 class engine. It’ll have low observable characteristics and PAF defined specifications.”

The Pakistan Air Force showcased its lightweight JF-17 Thunder fighter aircraft, which Pakistan began constructing ten years ago in collaboration with China. The PAF announced its plans to procure around fifty of the JF-17 Thunder’s improved Block III variant by 2024.

The aircrafts are being constructed with a 58/42 percent split, as the airframes are being jointly manufactured by China and Pakistan. The PAF also announced its decision to procure 26 two-seat JF-17Bs with additional fuel storage in a dorsal fin and improved training application for potential strike missions.

A report by National Interest stated that the new Block III is expected to cost around $32 million each. The new version boosts a helmet-mounted display system that is designed to allow enhanced flexibility in the targeting of short-range missiles in close dogfights.

Air Chief Mujahid Anwar Khan has said that production of Block III variant of JF-17 Thunder fighter jets is expected to begin this year.
He further said that a new Chinese radar will be used in these aircrafts.#PAF #JF17thunder #Airforce pic.twitter.com/CtAcKKHkEi

The report stated, “The jet intakes are widened to improve airflow, and the Russian RD-93 engine may eventually be replaced by a Chinese manufactured WS-13 turbofan. Additional thrust, combined with lightweight composite materials could potentially boost the type’s speed and range.”