Punjab University did not cancel degree of any student taking part in the Student Solidarity March. We reject the rumors, PRO PU. 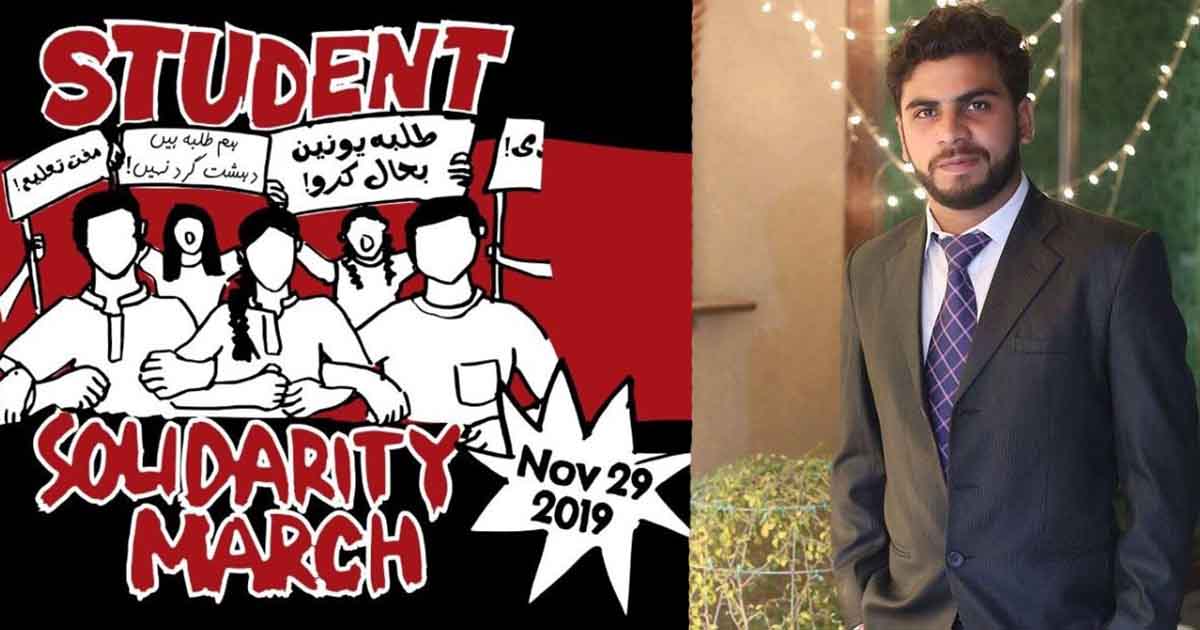 Some media reports claimed that the Punjab University has cancelled the M.Phil. degree of one of the main organizers of the Students Solidarity March being held today. Husnain Jamil Faridi, a student of Punjab University, was seen playing the drums during the awareness campaign for the march at the Faiz International Festival.

After banning student groups in Balochistan, today we received news that one of our main organizers' degree has been cancelled by Punjab University.@HUSNAINJAMEEL is an Mphil student in Political Science & is working fearlessly for students' rights. Targeting him is proof that pic.twitter.com/TlBOciFIYH— Ammar Ali Jan (@ammaralijan) November 27, 2019

Academic and activist Dr. Ammar Ali Jan tweeted and claimed that Husnain’s degree has been cancelled while noting that “corrupt university admins are afraid of emerging power of students.”

corrupt university admins are afraid of emerging power of students.

A robust team of lawyers is ready to defend them in court. These students are fighting for constitutional rights & have nothing to hide. May their honesty & sacrifice bear fruit. More power to you @HUSNAINJAMEEL— Ammar Ali Jan (@ammaralijan) November 27, 2019

Journalist Rabia Mehmood stated on Twitter that Husnain was informed verbally about his termination and was never given a warning. He was also barred from entering Punjab University’s campus.

.@HUSNAINJAMEEL MPhil student of PU, seen playing darbuka in this video is #StudentsSolidarityMarch organizer. Punjab Uni cancelled his degree. Husnain was informed verbally about the termination & was never given a warning. He was also barred from entering Punjab Uni campus. https://t.co/ZPJbDUEu8A

In response to Dr. Ammar’s tweet Professor Dr. Rana Eijaz Ahmad said that the notification of University of Balochistan has been attached with a news describing something about the Punjab University.

Imagine the liers group activity a letter from Baluchistan University displayed with Punjab university self concocted news. That has nothing to do with Punjab University. Disgusting.— Rana Eijaz Ahmad (@ranaeijaz) November 27, 2019

GVS spoke to the Public Relation Officer of PU, Khurram Shahzad, who rubbished such ‘baseless allegations’ and explained the matter. “Mr. Husnain was a student of M.Phil. Pakistan Studies, not M.Phil. Political Science as claimed by some people. He got admission in 2015 and he was supposed to complete his degree in maximum 4 years since the commencement of his classes. Four years have been passed and Mr. Husnain neither submitted his thesis not completed the degree. Therefore, his admission has been cancelled as per the rules of the Higher Education Commission (HEC),” he said.

He also clarified that the university never issued him any degree (of M.Phil.) since he never completed the degree he was enrolled in. “According to the HEC rules, his admission stands cancelled,” he added. He also said that Husnain is no longer a student of PU.

Read more: 29th November: Students Out on Streets Across Pakistan to Demand Rights

It is worth noting that the students across Pakistan are protesting with a demand for lifting the ban and hold elections for student unions in all colleges and universities of the country. Leaders/organizers of the march demanded the present government take immediate steps in order to show its seriousness in upgrading the polarized and class-based education system of Pakistan.

Analysts believe that the misuse of the March to gain some personal benefit is likely to damage the overall cause the students are voicing for. G. M Pitafi, Lahore-based academic, believes that “this news has disappointed me. These students should have been careful. But where is the media? Don’t they [media] confirm the developments before they publish them?”. He further noted that both student leaders and their supporters are encouraged to carefully read the situation so that their myopic personal interests do not overshadow the collective purpose of the march.

OpEd: How bureaucrats and dinosaurs are very similar