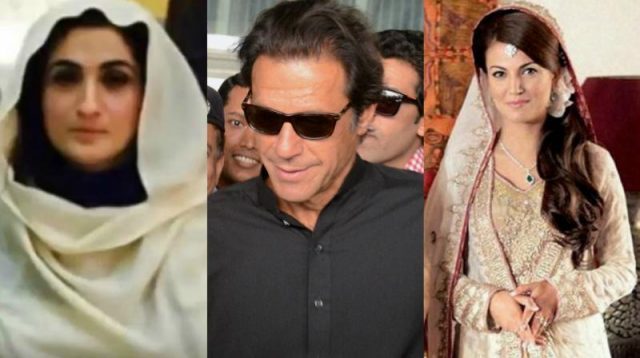 Khan on his third marriage with Sufi scholar Bushra Maneka said he proposed the lady without seeing her face. “I did not catch a glimpse of my wife’s face until after we were married. I proposed to her without seeing her because she had never met me without her face being covered with a full veil”.

“The only idea I had of what she looked like came from an old photograph I had seen in her house.” Imran Khan stated Bushra Maneka observes ‘parda’ and that she will not meet other men with her face uncovered neither she will leave the house unveiled. The PTI leader said he was not disappointed when she finally removed her veil.

“I was not disappointed, and now I am happily married. It would, he admits, have been unthinkable if someone had told me I would marry someone whose face I hadn’t seen. I would have thought they were mad.”

“I have gradually realized that although I know more about physical attraction than anyone else, actually the character of a person and the mind, the intellect, is much more important than the physical, because in my experience that has the smallest shelf life.”

‘That is what keeps the interest. I have great respect for my wife’s intellect and character.”

“My interest in Sufism started 30 years ago. It changed my life,” he says adding that “Sufism is an order with many levels, but I have never met anyone who is as high as my wife. My interest in her began with that.”

Imran Khan said he was introduced to Bushra Maneka through his sister who is the member of Pakistan Tehreek-I-Insaf. Khan informed that he initially visited Bushra Maneka to seek her knowledge regarding Sufism.

“I would go and meet her and read the books she would recommend.”

Gradually the visits became more frequent. But Khan insists that he proposed to her only after her divorce and before that he had never thought about this.  “It was in January when I proposed to her without seeing her face.”

Bushra Maneka, 36, is the mother of five children, and Khan has two sons from his first wife Jemima Khan. Imran Khan said he had to wait several weeks for an answer due to family issues.

When Indians were featured in Pakistani cinema

Shazam – most family-friendly film to date