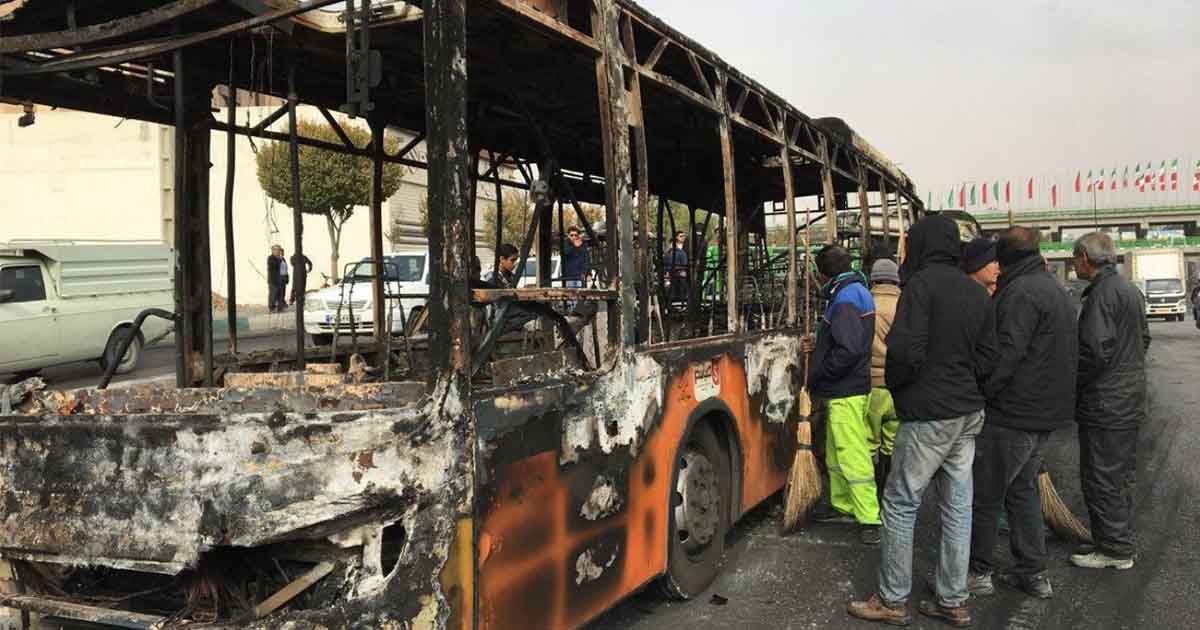 Iranian President Hassan Rouhani said Wednesday the country’s people had defeated an “enemy conspiracy” behind a wave of violent protests and were celebrating their victory.

Rouhani blamed the deadly unrest on “anarchists” who took to the streets “based on a plot that the region’s reactionary, the Zionists and Americans hatched”, referring respectively to Saudi Arabia, Israel and the US.

The demonstrations erupted in sanctions-hit Iran on Friday, hours after the price of petrol was raised by as much as 200 percent. Motorists blocked highways in Tehran before the unrest spread to at least 40 urban centres, with petrol pumps torched, police stations attacked and shops looted.

The US aircraft carrier strike group Abraham Lincoln sailed through the Strait of Hormuz, a narrow waterway separating Iran and the United Arab Emirates.

Officials have confirmed five deaths, including of three security personnel stabbed by “rioters”. In Shahriar, west of Tehran, mourners chanted “Death to America” in a funeral procession on Wednesday for one of those killed, a Revolutionary Guards commander.

The UN human rights office said it was alarmed by reports live ammunition had caused a “significant number of deaths”. Amnesty International said more than 100 demonstrators were believed to have been killed, and that the real toll could be as high as 200.

The full extent of the bloodshed was difficult to ascertain given a near-total internet blackout since the weekend.

Rouhani told a cabinet meeting that “our people have been victorious against … the enemy’s conspiracy. “Those anarchists who came out onto the streets were few in number,” he said, insisting “this is the biggest display of the power of the nation of Iran”.

Supreme leader Ayatollah Ali Khamenei said late Tuesday that “the recent actions were security issues, not from the people… We have repelled the enemy.”

The full extent of the bloodshed was difficult to ascertain given a near-total internet blackout since the weekend.

Khamenei has previously blamed the unrest on the Pahlavi royal family ousted in the 1979 Islamic Revolution and armed opposition group the People’s Mujahedeen of Iran, which Tehran considers a “terrorist” cult.

In Shahriar, thousands of mourners trailed behind a truck carrying a coffin, clutching portraits of the slain Guard and posters that read “Down with USA”. They passed burned-out buildings, including a bank, post office and shopping centre.

One of the mourners, Younes Abutalebi, told AFP: “My pension is 18 million rials ($146). If it was cut… I would go begging — but I wouldn’t set fire to a bank.” Rallies against the unrest were also held in Arak, Ardebil and Ghorghan, among other cities.

Iran’s economy has been battered since May last year when President Donald Trump unilaterally withdrew the US from a 2015 nuclear agreement and reimposed sanctions. Tensions have soared this year, with the US widening its sanctions to include Khamenei and other key entities as Iran cut its nuclear commitments.

The arch-foes came to the brink of a military confrontation in June when Iran downed a US drone and Trump ordered retaliatory strikes before cancelling them at the last minute. Iran was blamed for a September 14 attack that knocked out two major oil installations in Saudi Arabia, halving its crude output.

In Shahriar, thousands of mourners trailed behind a truck carrying a coffin, clutching portraits of the slain Guard and posters that read “Down with USA”.

Saudi Arabia’s King Salman urged Iran on Wednesday to abandon an expansionist ideology that he said had “harmed” its own people. The French foreign ministry expressed “deep concern over information indicating the deaths of numerous protesters” in Iran.

It urged “respect of freedom of expression and access to means of communication, as well as the right to demonstrate peacefully”. On Tuesday, the US aircraft carrier strike group Abraham Lincoln sailed through the Strait of Hormuz, a narrow waterway separating Iran and the United Arab Emirates.

Rouhani has defended the move, pledging proceeds would go to the needy. In his latest remarks, he said the first payments had been made to more than seven million people, and that in total 18 million would receive handouts by Saturday.

Captain Safdar is not the only one who wants Dr. Abdus Salam’s name removed at QAU