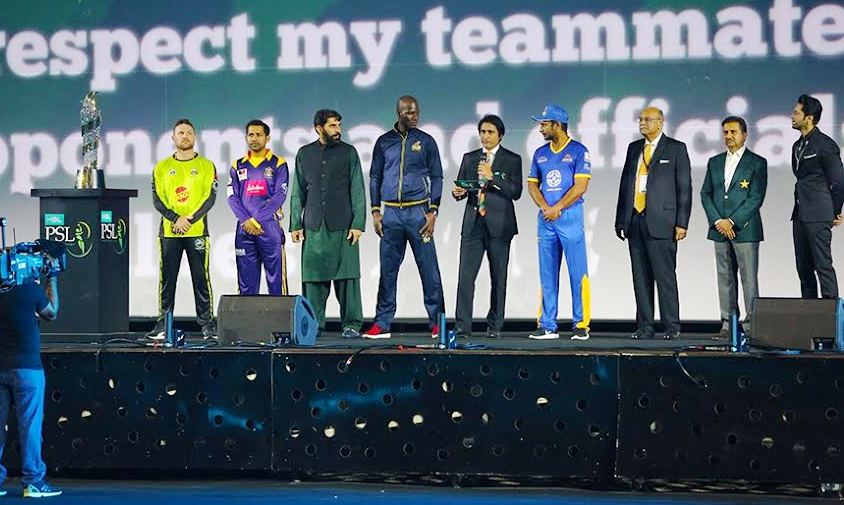 Keeping the PSL in Lahore, Pakistan, fits in with the need for soft power that Pakistan needs to survive as a nation. In this global and economic world where foreign policies are mostly dependent on three types of powers; hard, soft and smart; soft power is the most significant. In Joseph Nye’s words, soft power is the ability to attract other people to your side without coercion.

American and Chinese dreams, shining India and loving London are the popular terms which are emphasized by these countries, in order to utilize their indigenous culture and social values for economic gains and global influences.

Pakistan is, too, is in need of stabilizing national interest and image through soft power in form of sports, media, IT, cultural values and tourism.

The decision to arrange final event of PSL in Lahore despite the devastating blasts is an encouraging and a bold step in accepting and facing challenges to ensure the potential bright future of Pakistan can be brought forth.

The challenge to arranging Pakistan Super League’s successful final is the same as a quest for peaceful green identity. Chances and opportunities in challenging environment are always rare in their nature of existence but this rarity provides an excellent fortune to secure national interest and integrity.

Sabotaging the interests of others and cementing ones own are the core subjects of classic neo-realism in foreign policy analysis. India has done the same. Failure of international cricket in Pakistan and dissuading PCB from international influence is  backed by Indian government and always taken seriously by the ICB.

On the other hand, the passive nature of our national leaders and the politicized PCB governing body has done nothing in order to bring international cricket into the country. Arranging series with Zimbabwe or other third world country gives nothing for global influence. The arrival of big giants of cricket world can help change the global-perception about Pakistan.

Yes of course, it is does. Our own colonial and imperialist mentalities and designs have put Pakistan on the road to fragilities, institutional failure and undefined goals. The failure of cricket game is a vivid example in this regard.

Still, maybe time is just about in our hand. Wise national decisions can re-stabilize Pakistan to achieve in this frenzied environment.  In this regard, the final of PSL is an acid test case which needs seriousness rather than stupidities and fights amongst the national players as to who will lead – fights can only lead to shame, degradation and national failure.

Cricket is the most significant ingredient of soft power that constructs the national image through its series and tournaments with other countries. The tragic attack on Sri Lankan team placed a cemented-barrier to stop the arrival of international cricket teams to Pakistan.

Wise national decisions can re-stabilize Pakistan to achieve in this frenzied environment.

PSL matches in Dubai do nothing for our image and only help perpetrate other’s designs for the nation. The failure or any other possible threat to a peaceful PSL final will lead us further down the path of isolation. Security is of the essence which will help to restart the flow of international cricket teams to Pakistan. This important for Pakistan both economically and politically.

Rising India is not rising because of its economic success but also because of the soft power it sells to the world about itself – much of which is done through the cricket game and film industry that have built a positive and peaceful image of India at global level. The Indian government gives huges subsidies and help to the arts and movies in its country.

On the contrary, we, since the attack on the Sri Lankan team in Lahore, are facing and not even trying to understand how to improve our soft power through narrative – cricket being one way alone.

Responsible authorities must play a role of true national guardians in order to ensure successful final of PSL. In this regard, political leaders and security agencies must go to any limit of cooperation that leads us to peaceful final and security-satisfaction of international players participating in PSL.

Abdul Rahim is currently pursuing M. Phil degree with a focus on Talibanization and Imperialist Designs in 21st Century at International Islamic University, Islamabad. He tweets at Rahim_realist and his email is abdul.mseng346@iiu.edu.pk. The views expressed in this article are the author’s own and do not necessarily reflect Global Village Space’s editorial policy.