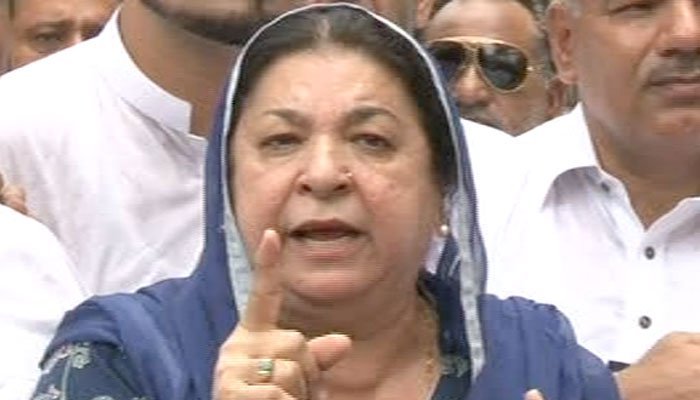 Pakistan Tehreek-i-Insaf (PTI) on Tuesday challenged the results of the NA-120 by-election in the Election Commission of Pakistan (ECP). If successful a move like this would be highly detrimental for PML (N) as it is the seat that was left vacant after Nawaz Sharif was disqualified over the Panama Papers verdict in July.

PTI candidate Dr Yasmeen Rashid, who lost the crucial by-election in Lahore to Pakistan Muslim League Nawaz (PML-N) candidate Begum Kulsoom Nawaz, the wife of the former prime minister Nawaz Sharif, filed a petition in the ECP calling for a probe into what she said were massive irregularities in the by-election.

Read more: Why is Imran Khan challenging the ECP?

Dr Yasmeen Rashid submitted the petition that the ruling party consistently breached the code of conduct for the by-election issued by the electoral body.The party has alleged massive irregularities and discrepancies in the polls, requesting the election authorities to look into, what they have called, a systematic manipulation of results.

Suspect voters were allowed to cast their votes despite the objections of PTI polling agents, said Dr Rashid.

Dr Yasmin Rashid said the Lahore High Court had sought a list of 29,000 voters, which the ECP provided on the evening of Saturday, a day before the polls.However, she added, the 100-page list revealed that 30 percent of the voters were residing abroad, while as many were not even alive.

According to the PTI leader, PML (N) votes were cast even in the name of the deceased. Suspect voters were allowed to cast their votes despite the objections of PTI polling agents, said Dr Rashid. Rashid claimed that there was also duplicity of votes in the polls. PTI has filed 32 petitions over the violation of the ECP’s code of conduct, added Dr Rashid.

If the election commission decides that the proof provided by PTI is sufficient for a probe, then that act itself would be detrimental for the already beleaguered PML (N). It is reeling from the corruption charges that saw its leader disqualified. It had termed the victory in the NA-4 election as a popular rejection of the Panama verdict.

The polls on the 17th of September revealed that Kulsoom Nawaz secured 59,413 votes, while Dr Yasmeen Rashid, had come second with 46,145 votes, losing the seat to the former with a margin of 13, 268. For many this was not believed to be a convincing victory for the Sharif family on the seat they considered their own for so many years.

Pakistan Tehreek-i-Insaf (PTI) on Tuesday challenged the results of the NA-120 by-election in the Election Commission of Pakistan (ECP).

PML (N) spun the victory as both proof of PML (N) as a popular party as well as the fact that its voter base was still intact. However, if the ECP acts on the charges, the PML (N) could find itself in hot water. It is still trying to wash off the allegations of having used rigging to come to power in the 2013 elections.

Read more: What if Imran Khan is disqualified by Supreme Court?

Being challenged in its stronghold this way puts PML (N)’s reputation as a viable electoral force in question. With the 2018 elections looming close, a prospect like this will not be welcomed by PML (N).

Previous articlePakistan’s system of governance is tailor-made for strife
Next articleIs Shahbaz Sharif diverting public attention from divisions within PML-N?

Rivalry between PML-N and PTI