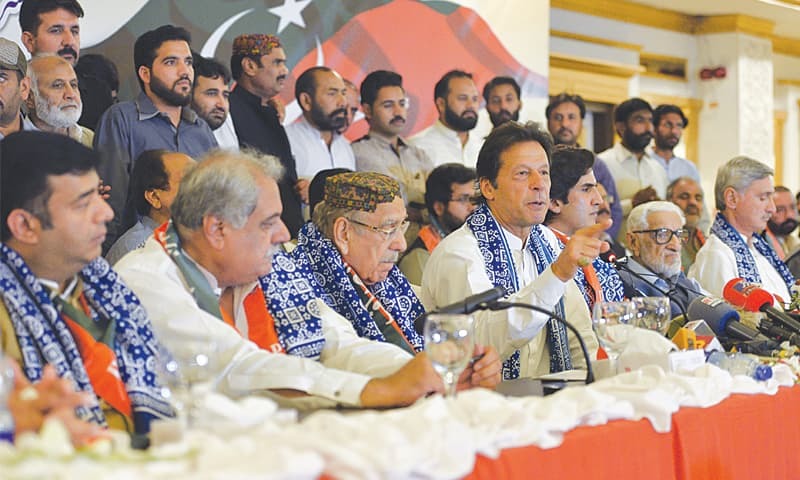 The Pakistan Tehreek-i-Insaf (PTI) and the Jamiat Ulema-i-Islam-Sami (JUI-S) have agreed to formulate a “joint strategy” for the next general elections. The decision was made by the leadership of both parties at a meeting attended by JUI-S chief Maulana Sami ul Haq and PTI chairman Imran Khan on Sunday.

The leaders of the two parties agreed to continue consultations and contact with each other so that they could form better relations before the next elections. Khyber Pakhtunkhwa (KPK) Chief Minister Pervez Khattak, Information Minister for KPK Shah Farman, Maulana Hamid ul Haq Haqqani and Maulana Syed Samar Yousuf were also present at the meeting.

Read more: Has PTI MNA Dawar Kundi been expelled from the party?

“In the meeting, the leaders of both the parties in principle agreed to continue consultative meetings to prepare a joint strategy for the next elections so that the two parties could jointly struggle to bring the country out of the present crises and difficulties,” said a handout issued by PTI’s media department.

PTI has been proactive and over the past several months has successfully inducted several heavy weight politicians from Punjab and Sindh in its ranks.

This announcement comes at a time when several alliances are being chalked out prior to the next general elections. Recently, religious parties from across the country held a meeting to revive MMA (Muttahida Majlis–e–Amal). Moreover, political parties in Karachi have also tried to form alliances, although, MQM-PSP did not succeed in this endeavor.

Former President and Army Chief General Pervaiz Musharraf has also jumped on the Pakistani political scene and has asked for the formation of an alliance to fight the ‘status quo’ in the next general election.

PTI has been proactive and over the past several months has successfully inducted several heavy weight politicians from Punjab and Sindh in its ranks. PPP has also been desperately trying to relaunch itself in Punjab from where it was virtually wiped out in the 2013 elections.

Analysts believe that the likelihood of the formation of alliances between political parties surfaced soon after the disqualification of ex-premier Nawaz Sharif. There is an increased realization among political parties that PML-N is now weak and they are now striving to form alliances to make gains in the next general elections at PML-N’s expense.