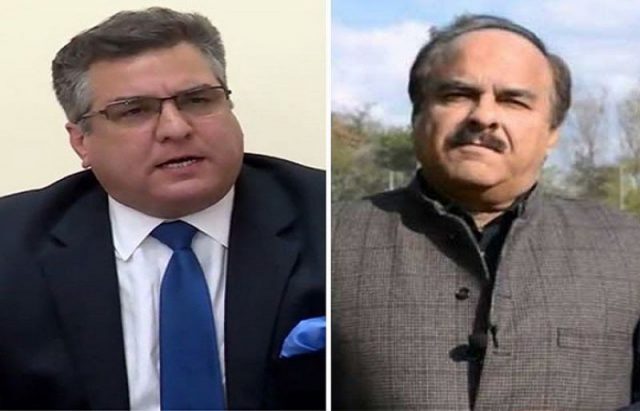 Daniyal’s derogatory remarks irked Haq that led to a heated exchange of argument between them. Daniyal Aziz called Naeem-ul-Haq a ‘thief’, after which the PTI leader lost his patience and slapped him.

The incident took to surprise other guests on the show, including politician Nafeesa Shah from PPP, analyst Iftikhar Ahmed and anchorperson Muneeb Farooq. Nafeesa Shah left the show following the incident.

Daniyal Aziz has to be appreciated for not responding back in a similarly violent manner. Following the incident, Daniyal Aziz called it a pre-planned conspiracy of PTI to provoke him. He said he did not say anything that triggered such a response from PTI leader. Aziz further said PTI members lack the patience to endure criticism when called out. He expressed his thoughts while talking to media outside accountability court on Wednesday.

Former ousted Prime Minister and leader of PML-N, Nawaz Sharif expressed his dismay over the slapping incident on a live television show. While talking to media after the proceedings of Accountability court on Wednesday, Nawaz Sharif said ‘slapping’ is in the culture of PTI. He called his political opponent and chief of PTI, Imran Khan responsible for the incident.

“One by one all hidden agendas of PTI are being exposed. Please remember all small things are being noted, the nation remembers everything.”

His son-in-law Capt. Safdar, too, expressed his concern over the incident and asked if this is the culture PTI is setting for the youth. “This was a slap on the face of entire parliament,” he added further. He asked Imran Khan to take notice of the incident.

People have condemned the incident on social media as the video went viral on the Internet. Pakistan Tehreek-I-Insaf has not issued a statement or apology yet neither has Imran Khan commented on the controversy, but his followers expect a respectful response from him.

This is not the first time that Naeem-ul-Haq has resorted to violence on live TV. A few years ago, the PTI lawmaker threw a glass full of water on PPP’s Jamil Soomro.

Prior to the yesterday’s slapping incident, the nation has witnessed ample incidents of physical and verbal intimidation before, including the PTI’s Murad Saeed and PML-N’s Abid Sher Ali scuffle in the national assembly during the budget presentation speech. Minister Abid Sher Ali’s derogatory remarks on Saeed’s sister and an attack on Shireen Mazari provoked a physical attack from Murad Saeed.

Pakistan Tehreek-I-Insaf has not issued a statement or apology yet neither has Imran Khan commented on the controversy, but his followers expect a respectful response from him.

It is worthy to mention that Pakistani politics have been already engulfed in a culture of ink and shoe attacks. Under such circumstances, it is incumbent upon the political leaders to show restraint towards their political opponents, and condemn such incidents.

It is in keeping with the #TTPTI’s Party norms & tradition. Condemnable @geonews_urdu invited #NaeemUlHaq as a guest knowing his track record & aired the abuses & violence for ratings. TV talkshows are poor quality entertainment meant to curtail meaningful debate on issues. https://t.co/Yf97wrzrxK

Imran Khan might be a populist, but he is no Donald Trump – Rupert Stone