PTI rules out alliance with PML-N and PPP 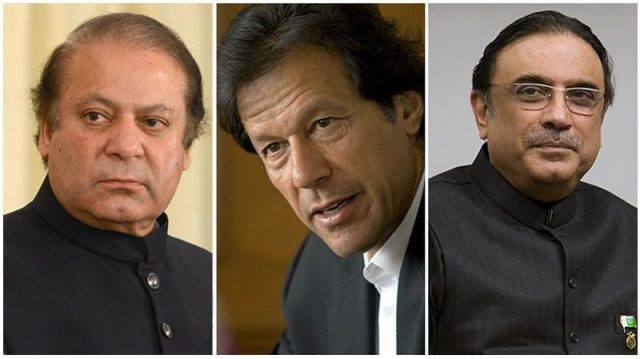 Regarding the upcoming general elections, Pakistan Tehreek-i-Insaf (PTI) chairman Imran Khan has stated that his party will not make an alliance with Pakistan People’s Party nor with Pakistan Muslim League-Nawaz.

Citing the past association between PPP and PML-N, Imran rules out the possibility of an alliance with parties, which in the past had collaborated and reached consensus over the 14, May 2006 Charter of Democracy (CoD) and the 18th amendment in April 2010.

Speaking at a fundraising event in London, Khan alleged that both parties had struck a deal for installing a caretaker government which held the 2013 general elections.Under this deal, PML-N and PPP appointed the caretaker government and officials in the Election Commission of Pakistan and allegedly rigged the elections.

The purpose of the caretaker setup is to conduct free and fair elections. Imran had condemned PML-N for rigging the elections in 2013. Khan has been a fierce critic of Zardari and Nawaz’s politics and had in the past voiced concerns over the CoD. Even, when Zardari was acquitted by NAB under Chairman Qamar, it became clear that something was brewing between the two parties.

Imran alleged that acquittal in the illegal asset case as a proof of the deal struck in the garb of CoD by the PPP and PML-N.After the controversial win for PML-N, Imran Khan held former Prime Minister Nawaz Sharif and former President Asif Ali Zardari responsible for rigging the elections to reach the corridors of power to commit more corruption.

Even the independent observers and institutions, raised concerns over the fairness of the elections. Commenting on 2013 general election, Michael Gahler, the chief observer of the European Union’s elections observation mission (EOM) had confirmed the serious problems in polling.

Imran is aware of past antics of these parties, which prompted him to float names for the interim PM, despite having no constitutional power to make other parties comply with this.

Under this deal, PML-N and PPP appointed the caretaker government and officials in the Election Commission of Pakistan and allegedly rigged the elections.

Though recently, relations between PML-N and PPP appeared to have gone soar, yet the parties can still form a nexus in Punjab given the deteriorating political position of both in the province. The foul play can’t be ruled out, as far as PTI is concerned.

Being a movement for justice party, politics of PTI can thrive, if it sticks to its ideology and takes a decision based on justice and discourages compromises which challenge its ideology.

PTI blamed returning officers (RO’s) and the Punjab administration of playing a role in fixing the match in favor of Nawaz.Under pressure, ECP had blamed RO’s for election mess. Zardari had also raised concern over the transparency of the May 11 elections and questioned the decisive role of RO’s.

Breaking the status quo is not easy and Imran is aware of this fact.  In Punjab, after consultation with other opposition parties, PTI’s opposition leader in the Punjab Assembly Mian Mahmood-ur- Rasheed will present the names of the party’s nominees for the next caretaker Punjab CM to Shehbaz Sharif.If PTI can pre-emptively devise a strategy to dislodge any nexus in the province, it can avoid anticipated wrongdoing.

In five-years leading to the election, Imran criticized both Nawaz and Zardari for playing a central role in disqualification of Nawaz. Being a movement for justice party, politics of PTI can thrive, if it sticks to its ideology and takes a decision based on justice and discourages compromises which challenge its ideology. It must know making alliances with apparently corrupt parties can only result in self-defeat.