Putin's top critic suddenly fell sick while in jail for holding a rally against government's orders and was hospitalized. Doctor's claim that he might have been attacked with a toxic nerve agent. 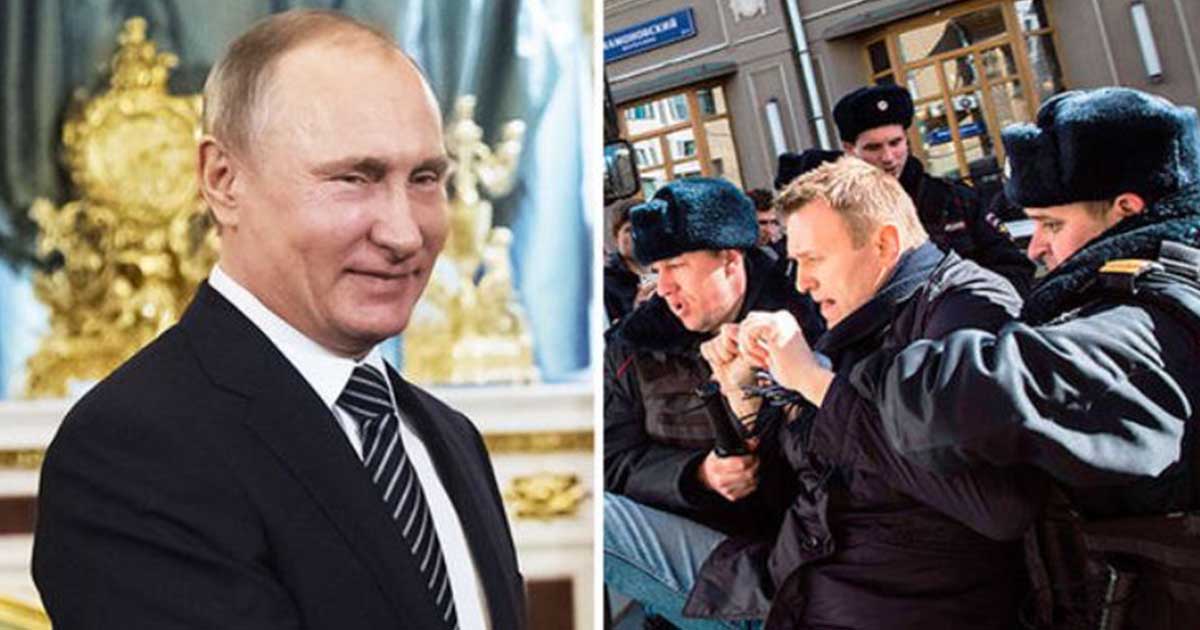 Russia’s jailed opposition leader Alexei Navalny might have been targeted by a “toxic agent,” his doctor said on Monday, as the Kremlin scrambled to contain a fresh political crisis after major protests.

The health of President Vladimir Putin’s top opponent deteriorated a day after almost 1,400 people were arrested at an unauthorized protest on Saturday, in the largest police crackdown in recent years.

On social media, Russians have seethed with anger over the brutality of police tactics, sharing stories of injuries and detentions

On Sunday, Navalny was rushed from jail to hospital suffering an acute allergic reaction.

“Some toxic agent may be the reason for Alexei Navalny’s ‘illness’,” his physician Anastasia Vasilyeva said in a post on Facebook, adding that doctors at Moscow’s hospital No 64, which treated him, have behaved strangely.

Vasilyeva said Sunday the 43-year-old could have been exposed to an “unknown chemical substance”.

A representative of the hospital told AFP on Monday Navalny was “in a satisfactory condition.”

“His body temperature is 36.6C,” the representative said, declining to release Navalny’s diagnosis.

‘Why are you lying?’

In a new post on Monday, Vasilyeva, who treated Navalny for a serious eye injury in the past, accused the doctors of not wanting to investigate what had caused Navalny’s illness.

They say “he simply has hives. But why are you lying?” the ophthalmologist said.

“They have decided against establishing the cause of generalized oedema and rash.”

She told the independent channel TV Rain that samples of Navalny’s tissue would undergo independent tests.

“Following the doctor's statement that Navalny was likely poisoned, a small group of his supporters gathered outside the hospital where he’s being treated. Police detained at least 20 people there, according to a live broadcast by TV Rain, whose reporter was also detained there.”

She also said she was finally allowed to examine the politician.

Vasilyeva and another physician visited Navalny on Sunday but were not allowed to properly examine the politician who had swollen eyelids, discharge in the eye, and rash on his upper body.

Vasilyeva said it appeared that he was suffering from acute toxic conjunctivitis and dermatitis.

The hospital doctors refused to inform Navalny and his family of his diagnosis and were visibly jittery, Vasilyeva said.

She treated Navalny in 2017 when he nearly lost the sight in one eye after an attack by an assailant.

Despite the crackdown, thousands of protesters – many in their 20s and early 30s – still turned up in central Moscow and clashed with police

She said she was worried for the condition of the damaged eye.

Navalny has never suffered from allergies in the past, his spokeswoman Kira Yarmysh has said.

On Saturday, police brutally crushed a peaceful rally after thousands took to the Moscow streets demanding the Kremlin open up the tightly controlled political system.

Ahead of the rally police detained a number of popular opposition politicians who have fought to get on the ballot and raided their homes and campaign offices.

At least 80 people have now been detained ahead of an opposition rally in Moscow. https://t.co/iDH0DErtHa

Despite the crackdown, thousands of protesters – many in their 20s and early 30s – still turned up in central Moscow and clashed with police. Liberal Russian media estimated the turnout at 10,000-15,000 people.

The opposition called for a new protest on Saturday.

Activists ‘will be banged up’

The Bell, a respected Russian-language online media, said the Kremlin had underestimated the Muscovites’ anger and readiness to protest.

“Now we’ll have to think what to do with all of this,” it quoted a Kremlin source as saying.

A person familiar with the Kremlin thinking told the Bell that the most prominent activists would be “banged up”, while the rest would be intimidated.

As police on Saturday beat up protesters with batons and indiscriminately arrested people including the elderly and passers-by, Putin dived to the bottom of the Gulf of Finland aboard a submersible.

On social media, Russians have seethed with anger over the brutality of police tactics, sharing stories of injuries and detentions.