Race is on for PTI Muzzafargarh candidate 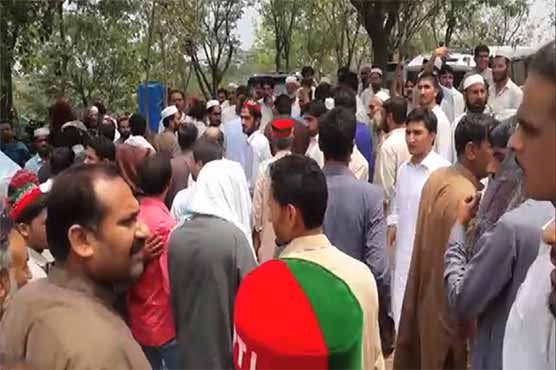 The upcoming PTI Jalsa in Muzzafargarh seems to have unleashed the race for the candidacy from this constituency in 2018 elections. Many bigwigs are doing their utmost to please the PTI Chief and secure a nomination. The November 3 power show has highlighted the rivalries within the party that revolves around acquiring a ticket to the legislative assembly.

Read more: Jhelum symbolizes all that could go wrong with PTI politics

The PTI plans to hold a massive gathering like the recent one in Mianwali in its warm up to the election campaign for the 2018 elections. The prospective candidates are burning the midnight oil to bring forth the most participants for the rally in order to show their worth to the party.

The arrival of Ghulam Mustafa Khar in the PTI has sparked off protests by the local PTI cadres who do not want him.

Ever since the PTI exploded onto the national political scene in its October 2011 Lahore rally, it has been flooded with electables vying for an assembly seat. Ironically many of the electables were former detractors who termed the PTI as a “One Man show”.

However, that all changed in 2011 when electables by the drove joined the PTI. Though their presence in the PTI fold often became the target of the PTI opponents, who ironically had more turncoats among their own ranks, the electables did show their worth by winning in Punjab and Sindh. They, however, still pose a dilemma for the PTI which campaigns on the platform of change and reform.

The recent induction of former PPP members into the PTI fold has raised many eyebrows among the national audience. The likes of Firdaus Ashiq Awan are not palatable for those who desire to see a Pakistan free from corruption. Dr. Aamir Liaquat, a notorious TV show host, was recently forced to withdraw from a PTI membership due to an adverse social media reaction.

Dr Aamir Liaquat, a notorious TV show host, was recently forced to withdraw from a PTI member ship due to an adverse social media reaction.

A former PPP member, Gulalai was given a women’s seat despite losing in her home constituency. After being denied the candidacy for the NA1 seat, she has become a rogue member with her blazing personal attacks on Imran Khan and the PTI.

Yet on the other hand, without electables, a party cannot win the important rural and semi-urban environs of Punjab and Sind. This assertion was cemented with the 2013 elections where it was former heavyweights like Shah Mahmud Qureshi, Javed Hashmi, Ghulam Sarwar Khan and Shafqat Mehmood who won seats while PTI newcomers came respectable seconds. This pattern had to do with various factors such as ‘biradari’ politics and clan loyalties.

While Electables may solve the viability problem for the PTI but they raise another problem. The problem revolves around loyalty. The electables that often join the PTI do not come out of any loyalty to the party manifesto but for their own self-interest. When that self-interest becomes opposed to the party interest the electable will usually opt for the former. That was apparent during the run-up to the 2013 elections when many ditched the PTI due to non-availability of seats.

The PTI plans to hold a massive gathering like the recent one in Mianwali in its warm up to the election campaign for the 2018 elections.

Electables also have a tumultuous relationship with the old members of the PTI. The arrival of Ghulam Mustafa Khar in the PTI has sparked off protests by the local PTI cadres who do not want him. The case of Jazi Khan, the PP12 MPA whose candidate for UC chairman sparked off a revolt in the PTI voter panel who opted for an independent candidate is also significant.

The upcoming PTI jalsa in Muzzarafargarh has seemed to unleash the race for the candidacy in 2018 elections.

Furthermore, electables do not always bring victory. The Azad Kashmir elections saw the PTI being wiped out despite having many heavyweights among their ranks. It was observed that the presence of these old faces forced many PTI voters into the arms of the PML(N).

The presence of electables might bring benefits but their arrival is also fraught with many troubles for the party. The PTI needs to chart a course in order to tackle any potential issue.