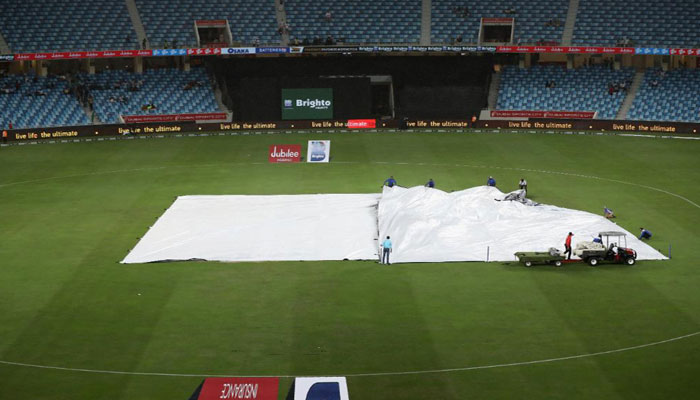 Persistent rain forced the third and final one-day international between Pakistan and New Zealand to be abandoned Sunday, extending the Asian side’s seven-year wait for a series win over the Black Caps.

New Zealand, set a daunting 280-run target against a potent Pakistan bowling attack were 35-1 after 6.5 overs when rain halted play. That left the series tied at 1-1 after New Zealand won the first match by 47 runs while Pakistan claimed the second by six wickets with both games played in Abu Dhabi.

The two teams now play a series of three Tests, with the first starting in Abu Dhabi from Friday.

Pakistan captain Sarfraz Ahmed said his team had been in a good position to force a series win. “It’s a sort of disappointing end,” said Sarfraz. “But you can’t fight with nature, we were in a good position after a good total and then got a key wicket.

“We didn’t do well in the first game but overall we were the better side and had we won this match it would have been icing on the cake.” Pakistan had posted a strong 279-8 after Sarfraz won the toss and opted to bat and then their spearhead Shaheen Shah Afridi had dismissed Colin Munro for nought in the first over.

When rain stopped play, George Worker was unbeaten on 18 and Henry Nicholls was 15 not out. Pakistan batted well with Babar Azam, Fakhar Zaman and Haris Sohail all contributing before Lockie Ferguson took a career-best 5-45 for 11 wickets in the series.

Zaman and Mohammad Hafeez (19) put on 64 for the first wicket before Hafeez dislodged a bail with his heel while working Ferguson to long leg, bringing Azam to the crease in the 14th over. Zaman hit eight boundaries in his eighth one-day half-century before being caught on the long-on boundary off Colin de Grandhomme for 65.

Persistent rain forced the third and final one-day international between Pakistan and New Zealand to be abandoned Sunday.

Azam then paced the innings during a third-wicket stand of 108 with Sohail. Sohail struck two sixes and six boundaries in his 59-ball 60 before he was caught in the deep off Ferguson. Azam faced 100 balls for his 92 but that included just four fours and one six.

He finally fell in the 49th over as he tried to reach his ninth one-day hundred, caught in the deep off Trent Boult, small consolation for the left-arm seamer whose 10 overs cost 80 runs. Pakistan lost four wickets in the last two overs and may regret scoring only 38 runs in the last five. Ferguson’s previous best of 3-17 came against the West Indies at Christchurch in December last year.

New Zealand were without their skipper Kane Williamson who pulled out with a groin injury with Tom Latham leading the side. Pakistan left out Imam-ul-Haq on precautionary grounds after he suffered a blow to his helmet in the second match on Friday.

The two teams now play a series of three Tests, with the first starting in Abu Dhabi from Friday.