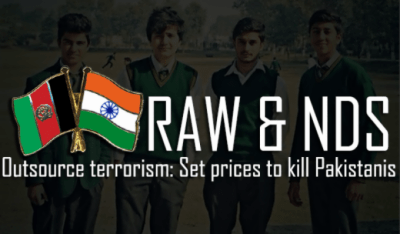 Discussions with several sources in local police and intelligence in and around Chamman, in Pakistani province of Baluchistan reveal that Indian and Afghan Intelligence agencies (RAW & NDS respectively) operating from the Afghan town of Spin Boldak, may have developed newer ingenuous methods of using terror outfits against Pakistani security forces and civilians.

With more and more arrests, and surrenders in these areas and the debriefing of the arrested handlers in Lahore and other parts of Pakistan a broader picture of Indian and Afghan agencies role in creating terrorism inside Pakistan is getting clearer. This can be called: “Out-Sourcing of Terrorism”

A broader picture of Indian and Afghan agencies role in creating terrorism inside Pakistan is getting clearer. This can be called: “Out-Sourcing of Terrorism”

With the recent wave of terror attacks across Pakistan, that killed almost 200 people over the last ten days, the question that stood out is: how do these apparently religiously motivated or sectarian outfits finance their activities? Intelligence and policing sources claim, that the drawing room intellectuals sitting in Islamabad and hobnobbing with diplomats, have no idea of the realities on ground. Terrorism costs money; a single suicide mission can cost up to Rs. 4 million to its planners and takes several weeks of sophisticated planning and coordination. Terrorism does not come cheap. “Its less about religion and sectarianism and more about management & financing like business projects”; one intelligence source argued.

read more: Pakistan: Terrorism at Lal Shahbaz Qalandar Shrine; What does it mean?

Menu prices for attacks in Pakistan

According to reliable sources, India’s Research Analysis Wing (RAW) has circulated a menu-like open price list to all terrorist groups including TTP, LeJ, Al Alami, Al Ahrar and militant factions of TTA, whereby a fixed price is paid for the successful execution of terrorist activity inside Pakistan. “If you do IED this much will be paid, if you attack school or kill children, so and so amount will be paid”, and the list goes on. Apparently the “Only proof you need to produce for claiming bounty is a video evidence to prove”; source claims.

Costs of Suicide Missions inside Pakistan?

Talking to the various sources, one can more or less accurately estimate that one “suicide mission/undertaking” can cost the master planners around Rs. 4 million. The more the causalities, the higher the profile target, the more is the amount paid.

Terrorism costs money; a single suicide mission can cost up to Rs. 4 million to its planners and takes several weeks of sophisticated planning and coordination. Terrorism does not come cheap. “Its less about religion and sectarianism and more about management & financing like business projects”;

Public, media and drawing room intellectuals in Islamabad have remained focused on the hate filled “suicide bomber” who is perceived to be from one or the other sect or ideologically motivated group. But intelligence officers see a totally different pattern. Each and every part of the “Suicide Mission” can be individually priced and independently managed. For instance the suicide bomber and the suicide vest/jacket never reach the destination together. In case of Lahore attack on chemists, outside the Punjab Assembly, a truck driver was paid Rs. 250,000 for smuggling the “suicide jacket” under the impression that he was carrying a heroin filled jacket. The young suicide bomber was imported into Lahore by different group.

Young boys, often orphan or disturbed for some reason, taken away from their families or simply abducted are brain washed over a period of three to six months. These can be sold like market products – like burgers. Every item and every act of the “Mission Suicide Bombing” is priced separately.

These include the costs of unregistered vehicles used in border areas, costs of making suicide jackets, costs of facilitators and handlers and costs incurred in bribing the border posts and police officials on the way. Like the truck driver who improved the “suicide vest” in to Lahore, most of the officials take their cut in usual routine of corruption inside the system and are seldom aware of what they are facilitating.

In addition, these groups use ransom money as seed investment in terrorists activities. Kidnapping for ransom in Baluchistan is being operated by these terror outfits from across the border.

Intelligence and policing sources claim that such is the closed coordination and level of cooperation between the Indian and Afghan intelligence agencies across the border inside Afghanistan that RAW officers practically shadow and oversee Afghan NDS officers on every desk, in the NDS office, close to Pakistan border, in Spin Boldak.

RAW officers practically shadow and oversee Afghan NDS officers on every desk, in the NDS office, close to Pakistan border, in Spin Boldak.

Spin Boldak is a famous Afghan border town and the headquarters of Spin Boldak District in the southern Kandahar province of Afghanistan, next to the Durand Line border with Pakistan. It is linked by a highway with the city of Kandahar to the north, and with Chaman and Quetta in Pakistan to the south. Spin Boldak has the second major port of entry between Afghanistan and Pakistan, the Wesh-Chaman border crossing for human and cargo traffic. But apart from the regular roads that enter from Afghanistan into Pakistan, there are more than a dozen informal dusty roads or passages through villages along the famous Durand Line through which illegal traffic enters Pakistani province of Baluchistan.

Interestingly, of late the militant groups are united in using the deserted Baluchistan border region to get into the province and then transit into the rest of the country. Once in Chamman, number of roads can lead towards Karachi or Punjab.

Five to nine sleeper cells are operating in Baluchistan: they include the leftover remnants of TTP, LEJ, LEJ Al-Almi, and ISIS linked elements. “Recently we have smashed one network in Loralai region of Balochistan, but they are increasingly exploring our vulnerabilities”, said an intelligence source. NDS/RAW nexus has become specialized in inventing new names for the same elements. Often these groups have very limited membership and they are more of names to take responsibility for various acts.

NDS/RAW nexus has become specialized in inventing new names for the same elements. Often these groups have very limited membership and they are more of names to take responsibility for various acts.

One vulnerability is the long porous Pak-Afghan border, where it is almost impossible to plug gaps in the short amount of time and without proper technological use and deployment of funds. Baluchistan government has a plan for creating what it calls “50 Wings for FC” – basically border posts – over a period of three years. But plan is badly conceived, under financed and suffering from continuous delays. Border posts currently are mostly guarded by ill trained men, without any technological connectivity, some of whom are susceptible to corruption, which allows these groups to get into Pakistan. Most guards won’t know what they are facilitating.

“Levis” – traditionally Sardar controlled militias – supposedly policing 95 percent of Baluchistan, have no resources, lack training and the desire to deter these groups. Less than 5% of Baluchistan has formal police structure and that too, unlike Punjab, is very constrained in resources. Other state institutions like local administration, and law enforcement for example, DCO, DPOs etc, have also very scarce resources.. Musharraf govt had started to introduce the formal policing structure into Baluchistan – but that was abandoned under PPP/PMLN shared vision of Baluchistan after the 2008 elections, apparently to please the local notables who were against formal policing.

Given influence of various criminal gangs, local population is scared and is afraid to serve as eyes and ears of government agencies, to report suspects and suspicious activities. For any intelligence led operation to ensue, first a lead has to come from community elders. Such leads do come, which is positive but are not enough.

Musharraf govt had started to introduce the formal policing structure into Baluchistan – but that was abandoned under PPP/PMLN shared vision of Baluchistan after the 2008 elections, apparently to please the local notables who were against formal policing.

Over the last several months, after the decline of Baluch insurgency in its key districts, Pakistani administration lost its focus from terrorism and diverted energies of state institutions, to chase white collar crimes and money laundering issues, which had no direct or causal link with the spread of terrorism. Time was wasted, which should have been spent in attacking and apprehending these proxy groups wherever they were operating. Instead, first priority should have been on securing the country and its borders.

“We feel being overwhelmed by these nasty groups there is so less one can do if we could not muster the support of other institutions”, are warnings once again being given by reliable sources inside the administration in Baluchistan.

Unfortunately, the chattering classes in drawing rooms of Islamabad and Lahore and the English media in Pakistan, suffering from a time warp of early post-9/11 period, are still chewing away on the Indian or foreign derived narrative that all terrorism is a home grown phenomenon; in a literal brain dead fashion, they keep on defining terrorism merely as angry TTP, Islamists, madrassa problem, Shia, Sunni and other sectarian conflicts – missing the bigger picture altogether.

Many liberal commentators have echoed Indian and western arguments that unless Pakistani establishment opens its guns on all religious or militant groups terrorism won’t end. “This represents a camouflaged Indian argument to get rid of the groups with history of involvement in Kashmir”; an intelligence source argues. He adds: “It also represents a very intelligent ingenuous Indian design: because all militants targeted and alienated by the Pakistani governments will ultimately fall into Indian laps, like the angry tribals, in FATA, that became TTP”

read more: Why Modi needs to wake up? Advice from a Pakistani

“This is such a sophisticated warfare that we should give credit to the enemy for dividing us on identifying the real motive behind terrorism, and for failing ourselves for not being able to explain to the world and our own people, their [outside foreign intelligence agencies] modus operandi in using criminal terrorists groups for destabilising the country”, said one terrorism expert.

Pakistan needs to revisit and reinvent its counter-terrorism strategy and start plugging the gaps. In case of Baluchistan, which is now the principal entry point for NDS/RAW proxy groups and facilitators, the first immediate step needed is to secure our porous borders. This may offer a short-term palliative to terrorism and safety in the country. It is the only country, perhaps in the world, with three-quarters of its borders lying open to the enemy to come in and do as they will. In a nutshell, it’s the borders, stupid! First step is: Investment on Scientific Border Management.

Mirwais Khan is an Assistant Producer Content (Current Affairs) with a leading Pakistani media group. He has traveled extensively in the region and has a special interest in the political affairs of Afghanistan, Baluchistan, and KP. This piece is based upon his contacts between Quetta & Chaman and an earlier shorter version was published by GVS on 25th Feb.

Why will US military continue to fail in Afghanistan?