Raze Taj Mahal if you can’t restore it: Indian SC to Government 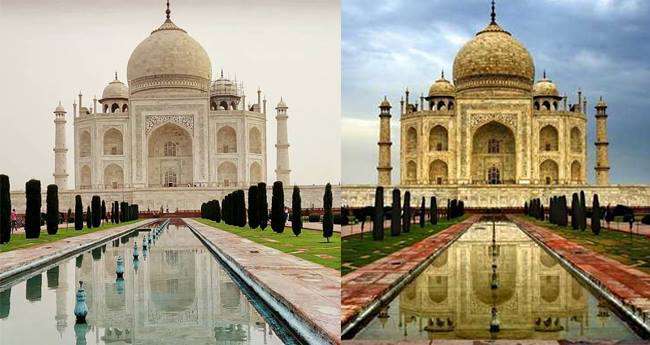 Indian judges have threatened to shut the Taj Mahal amid accusations that the authorities have neglected the 17th-century monument. The country’s Supreme Court said environmental damage to the white marble Taj was a “hopeless cause” and said the Indian federal government and the administration in Uttar Pradesh state had missed out on “incalculable” revenue by letting it fall into disrepair.

A little time earlier before his statement, the state government had removed the Taj Mahal from its official list of tourist destinations for which the state is famous.

“Either we shut down the Taj or demolish it or you restore it,” the two-judge bench told the governments. They were responding to a petition by an environmental activist concerned over the worsening state of one of the world’s seven wonders.

India’s Supreme Court (SC) on Wednesday came down heavily on the central and Uttar Pradesh (UP) state governments issuing a warning that the world heritage site would be “shut down” if steps for immediate restoration were not taken.

“Taj Mahal is now brown and green because of pollution — it has to be protected,” the Supreme Court bench of Justices M.B. Lokur and Deepak Gupta said. “There is absolutely no willingness to protect it. Either we will shut it down or you demolish or restore it.”

The court lamented that despite a parliamentary standing committee report on the Taj’s protection, no concrete steps were taken by the union and UP state government. Reacting to the UP government’s failure to come up with a vision document to protect the monument, the bench said it was “sheer lethargy” on the part of the authorities that the Taj was decaying. The court said the Taj was more beautiful than the Eiffel Tower and could have solved India’s foreign exchange problem.

“Eighty million go to see the Eiffel Tower, which looks like a TV Tower. Our Taj is more beautiful. If you had looked after it your foreign exchange problem would have been solved. Do you realize the loss caused to the country due to your apathy,” the court said. In February, the UP government had promised to provide a vision document enlisting detailed measures for protection of Taj.

“We are trying to take care of the environment around the structure so that the historic monument could be there for another 400 years and not just for a generation,” the UP government had stated in a written submission. On Wednesday, the bench told the Centre to furnish details of the measures taken for protecting the mausoleum built by Mughal Emperor Shah Jahan in memory of his wife Mumtaz Mahal.

They were responding to a petition by an environmental activist concerned over the worsening state of one of the world’s seven wonders.

The Centre responded that the Indian Institute of Technology, Kanpur was assessing air pollution level around Taj and would submit its report soon. “A special committee has also been set up to find the source of pollution in and around Taj Mahal, which will suggest measures to prevent it,” the centre said in an affidavit.

The top court also sought personal appearance of chairman of Taj Trapezium Zone (TTZ) — a 10,400 sq km area spread over Agra, Hathras, Firozabad, Etah and Mathura in UP and Bharatpur in Rajasthan — to explain violation of its earlier order prohibiting expansion of industrial units.

The Taj mahal has come into the limelight for a variety of unusual reasons. The first has been the omnslaught of pollution that threatens to destroy its beauty forever.  India’s top court on May 1 had sharply criticized the government for failing to protect the Taj Mahal, the centuries-old monument to love which has been changing color because of pollution. The brilliant marble of the Taj Mahal — a UNESCO world heritage site — has acquired a yellow tinge over the years.

Another major assault on the Taj Mahal is political. In 2017, ruling BJP legislator Sangeet Som had stated that the building and the Muslim rulers who had built it should not be considered a part of Indian heritage. A little time earlier before his statement, the state government had removed the Taj Mahal from its official list of tourist destinations for which the state is famous.

In June, A group of Vishwa Hindu Parishad (VHP) members tried to vandalise the west gate of the Taj Mahal on Sunday alleging that the Archaeological Survey of India (ASI) is blocking the way to a 400-year-old Shiva temple while constructing a closed area for the Taj Mahal